Encyclopedia
Lake Avernus is a volcanic
Volcano
2. Bedrock3. Conduit 4. Base5. Sill6. Dike7. Layers of ash emitted by the volcano8. Flank| 9. Layers of lava emitted by the volcano10. Throat11. Parasitic cone12. Lava flow13. Vent14. Crater15...
crater lake
Crater lake
A crater lake is a lake that forms in a volcanic crater or caldera, such as a maar; less commonly and with lower association to the term a lake may form in an impact crater caused by a meteorite. Sometimes lakes which form inside calderas are called caldera lakes, but often this distinction is not...
located in the Avernus
Avernus
Avernus was an ancient name for a crater near Cumae , Italy, in the Region of Campania west of Naples. It is approximately in circumference. Within the crater is Lake Avernus .-Role in ancient Roman society:...
crater in the Campania
Campania
Campania is a region in southern Italy. The region has a population of around 5.8 million people, making it the second-most-populous region of Italy; its total area of 13,590 km² makes it the most densely populated region in the country...
region of southern Italy
Italy
Italy , officially the Italian Republic languages]] under the European Charter for Regional or Minority Languages. In each of these, Italy's official name is as follows:;;;;;;;;), is a unitary parliamentary republic in South-Central Europe. To the north it borders France, Switzerland, Austria and...
, around 4 km (2.5 mi) northwest of Pozzuoli
Pozzuoli
Pozzuoli is a city and comune of the province of Naples, in the Italian region of Campania. It is the main city of the Phlegrean peninsula.-History:Pozzuoli began as the Greek colony of Dicaearchia...
. It is near the volcanic field known as the Campi Flegrei
Campi Flegrei
The Phlegraean Fields, also known as Campi Flegrei, , is a large wide caldera situated to the west of Naples, Italy. It was declared a regional park in 2003. Lying mostly underwater, the area comprises 24 craters and volcanic edifices. Hydrothermal activity can be observed at Lucrino, Agnano and...
and comprises part of the wider Campanian volcanic arc
Volcanic arc
A volcanic arc is a chain of volcanoes positioned in an arc shape as seen from above. Offshore volcanoes form islands, resulting in a volcanic island arc. Generally they result from the subduction of an oceanic tectonic plate under another tectonic plate, and often parallel an oceanic trench...
. The lake is roughly circular, measuring 2 km (1.2 mi) in circumference and 60 m (213 ft) deep.

Avernus was of major importance to the Romans
Ancient Rome
Ancient Rome was a thriving civilization that grew on the Italian Peninsula as early as the 8th century BC. Located along the Mediterranean Sea and centered on the city of Rome, it expanded to one of the largest empires in the ancient world....
, who considered it to be the entrance to Hades
Hades
Hades , Hadēs, originally , Haidēs or , Aidēs , meaning "the unseen") was the ancient Greek god of the underworld. The genitive , Haidou, was an elision to denote locality: "[the house/dominion] of Hades". Eventually, the nominative came to designate the abode of the dead.In Greek mythology, Hades...
. It gained its name from the Greek
Greek language
Greek is an independent branch of the Indo-European family of languages. Native to the southern Balkans, it has the longest documented history of any Indo-European language, spanning 34 centuries of written records. Its writing system has been the Greek alphabet for the majority of its history;...
word αορνος (originally αϝορνος) meaning "birdless", referring to the belief that birds flying over the lake would drop dead from the poisonous fumes that it emitted. The name Avernus was often used by Roman writers as a synonym for the underworld. In Virgil
Virgil
Publius Vergilius Maro, usually called Virgil or Vergil in English , was an ancient Roman poet of the Augustan period. He is known for three major works of Latin literature, the Eclogues , the Georgics, and the epic Aeneid...
's Aeneid
Aeneid
The Aeneid is a Latin epic poem, written by Virgil between 29 and 19 BC, that tells the legendary story of Aeneas, a Trojan who travelled to Italy, where he became the ancestor of the Romans. It is composed of roughly 10,000 lines in dactylic hexameter...
, Aeneas
Aeneas
Aeneas , in Greco-Roman mythology, was a Trojan hero, the son of the prince Anchises and the goddess Aphrodite. His father was the second cousin of King Priam of Troy, making Aeneas Priam's second cousin, once removed. The journey of Aeneas from Troy , which led to the founding a hamlet south of...
descends to the underworld through a cave near the lake. In Hyginus' Fabulae, Odysseus also goes to the lower world from this spot where he meets Elpenor, his comrade who went missing at Circe's place.

It is unclear whether the lake actually was as deadly as its reputation held it to be – it certainly holds no fears for birds today – but it is possible that volcanic activity could have produced deadly fumes. Volcanically active crater lakes can be extremely dangerous places, as illustrated by the tragic example of Lake Nyos
Lake Nyos
Lake Nyos is a crater lake in the Northwest Region of Cameroon, located about northwest of Yaoundé. Nyos is a deep lake high on the flank of an inactive volcano in the Oku volcanic plain along the Cameroon line of volcanic activity...
in Cameroon
Cameroon
Cameroon, officially the Republic of Cameroon , is a country in west Central Africa. It is bordered by Nigeria to the west; Chad to the northeast; the Central African Republic to the east; and Equatorial Guinea, Gabon, and the Republic of the Congo to the south. Cameroon's coastline lies on the...
. 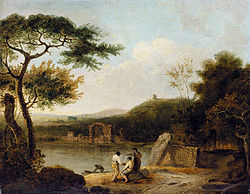 Despite the alleged dangers of the lake, the Romans were happy to settle its shores, on which villas and vineyards were established. The lake's personification, the deus Avernus, was worshiped in lakeside temples, and a large bathhouse was built on the eastern shore of the lake.

In 37 BC, the Roman general Marcus Vipsanius Agrippa
Marcus Vipsanius Agrippa
Marcus Vipsanius Agrippa was a Roman statesman and general. He was a close friend, son-in-law, lieutenant and defense minister to Octavian, the future Emperor Caesar Augustus...
converted the lake into a naval base named the Portus Julius
Portus Julius
Portus Julius was the home port for the Roman western imperial fleet, the classis Misenensis, named for nearby Cape Miseno...
after Julius Caesar
Julius Caesar
Gaius Julius Caesar was a Roman general and statesman and a distinguished writer of Latin prose. He played a critical role in the gradual transformation of the Roman Republic into the Roman Empire....
. It was linked by a canal to a nearby lake (Lucrinus Lacus
Lucrinus Lacus
Lucrinus Lacus, or Luctrin Lake is a lake of Campania, southern Italy, about three kilometres to the south of Lake Avernus....
) and from there to the sea. The lake shore was also connected to the Greek colony of Cumae
Cumae
Cumae is an ancient Greek settlement lying to the northwest of Naples in the Italian region of Campania. Cumae was the first Greek colony on the mainland of Italy , and the seat of the Cumaean Sibyl...
by an underground passage known as Cocceio's Cave (Grotta di Cocceio
Grotta di Cocceio
Grotta di Cocceio, also known as the Cocceius Tunnel, is a straight-line subterranean gallery nearly a kilometre in length connecting Lake Avernus with Cumae north of Naples, Italy. It was burrowed clean through the tuff stone of Monte Grillo from 38-36 BCE...
) which was 1 km (0.621372736649807 mi) long and wide enough to be used by chariots. This was the world's first major road tunnel; it remained usable until as recently as the 1940s.

In 2010 the lake was confiscated by the police after the owner was accused of being a mafia frontman.