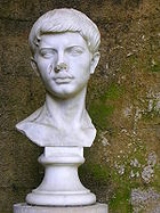 Overview
Publius Vergilius Maro, usually called Virgil or Vergil in English (October 15, 70 BC – September 21, 19 BC), was an ancient Roman
Ancient Rome
Ancient Rome was a thriving civilization that grew on the Italian Peninsula as early as the 8th century BC. Located along the Mediterranean Sea and centered on the city of Rome, it expanded to one of the largest empires in the ancient world....
poet of the Augustan period
Augustan literature (ancient Rome)
Augustan literature is the period of Latin literature written during the reign of Augustus , the first Roman emperor. In literary histories of the first part of the 20th century and earlier, Augustan literature was regarded along with that of the Late Republic as constituting the Golden Age of...
. He is known for three major works of Latin literature
Latin literature
Latin literature includes the essays, histories, poems, plays, and other writings of the ancient Romans. In many ways, it seems to be a continuation of Greek literature, using many of the same forms...
, the Eclogues (or Bucolics), the Georgics
Georgics
The Georgics is a poem in four books, likely published in 29 BC. It is the second major work by the Latin poet Virgil, following his Eclogues and preceding the Aeneid. It is a poem that draws on many prior sources and influenced many later authors from antiquity to the present...
, and the epic Aeneid
Aeneid
The Aeneid is a Latin epic poem, written by Virgil between 29 and 19 BC, that tells the legendary story of Aeneas, a Trojan who travelled to Italy, where he became the ancestor of the Romans. It is composed of roughly 10,000 lines in dactylic hexameter...
. A number of minor poems, collected in the Appendix Vergiliana
Appendix Vergiliana
The Appendix Vergiliana is a collection of poems traditionally ascribed as juvenilia of Virgil, although it is likely that all the pieces are in fact spurious...
, are sometimes attributed to him.

Virgil is traditionally ranked as one of Rome's greatest poets. His Aeneid has been considered the national epic
National epic
A national epic is an epic poem or a literary work of epic scope which seeks or is believed to capture and express the essence or spirit of a particular nation; not necessarily a nation-state, but at least an ethnic or linguistic group with aspirations to independence or autonomy...
of ancient Rome since the time of its composition to the present day.

Translation: O farmers, pray that your summers be wet and your winters clear.

Translation: Practice and thought might gradually forge many an art.

Translation: They keep out of the hives the drones, an indolent bunch.

Translation: A snake lurks in the grass.

Translation: Time bears away all things, even our minds.

Translation: Let us go singing as far as we go: the road will be less tedious.

Translation: Love conquers all things; let us too surrender to love.

Translation: I sing of arms and a man.

Translation: Perhaps it will even be pleasing to remember these things one day.

Translation: Do not trust the horse, Trojans. Whatever it is, I fear the Grecians, even bearing gifts.
More
x