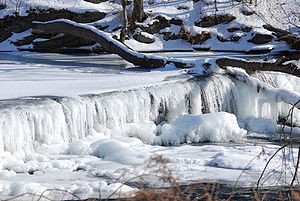 A waterfall is a place where flowing water rapidly drops in elevation as it flows over a steep region or a cliff.

Waterfalls are commonly formed when a river is young. At these times the channel is often narrow and deep. When the river courses over resistant bedrock
Bedrock
In stratigraphy, bedrock is the native consolidated rock underlying the surface of a terrestrial planet, usually the Earth. Above the bedrock is usually an area of broken and weathered unconsolidated rock in the basal subsoil...
, erosion happens slowly, while downstream the erosion occurs more rapidly. As the watercourse increases its velocity at the edge of the waterfall, it plucks material from the riverbed. Whirlpool
Whirlpool
A whirlpool is a swirling body of water usually produced by ocean tides. The vast majority of whirlpools are not very powerful. More powerful ones are more properly termed maelstroms. Vortex is the proper term for any whirlpool that has a downdraft...
s created in the turbulence as well as sand and stones carried by the watercourse increase the erosion capacity. This causes the waterfall to carve deeper into the bed and to recede upstream. Often over time, the waterfall will recede back to form a canyon or gorge downstream as it recedes upstream, and it will carve deeper into the ridge above it. The rate of retreat for a waterfall can be as high as one and half meters per year.

Often, the rock stratum
Stratum
In geology and related fields, a stratum is a layer of sedimentary rock or soil with internally consistent characteristics that distinguish it from other layers...
just below the more resistant shelf will be of a softer type, meaning that undercutting due to splashback will occur here to form a shallow cave-like formation known as a rock shelter
Rock shelter
A rock shelter is a shallow cave-like opening at the base of a bluff or cliff....
under and behind the waterfall. Eventually, the outcrop
Outcrop
An outcrop is a visible exposure of bedrock or ancient superficial deposits on the surface of the Earth. -Features:Outcrops do not cover the majority of the Earth's land surface because in most places the bedrock or superficial deposits are covered by a mantle of soil and vegetation and cannot be...
ping, more resistant cap rock will collapse under pressure to add blocks of rock to the base of the waterfall. These blocks of rock are then broken down into smaller boulders by attrition
Attrition (weathering)
Attrition is a form of coastal or river erosion, when the bed load is eroded by itself and the bed. As rocks are transported downstream along a riverbed, the regular impacts between the grains themselves and between the grains and the bed cause them to be broken up into smaller fragments. This...
as they collide with each other, and they also erode the base of the waterfall by abrasion
Abrasion (geology)
Abrasion is the mechanical scraping of a rock surface by friction between rocks and moving particles during their transport by wind, glacier, waves, gravity, running water or erosion. After friction, the moving particles dislodge loose and weak debris from the side of the rock...
, creating a deep plunge pool or gorge. 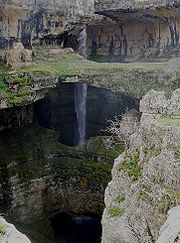 Streams become wider and shallower just above waterfalls due to flowing over the rock shelf, and there is usually a deep area just below the waterfall because of the kinetic energy
Kinetic energy
The kinetic energy of an object is the energy which it possesses due to its motion.It is defined as the work needed to accelerate a body of a given mass from rest to its stated velocity. Having gained this energy during its acceleration, the body maintains this kinetic energy unless its speed changes...
of the water hitting the bottom. Waterfalls normally form in a rocky area due to erosion. After a long period of being fully formed, the water falling off the ledge will retreat, causing a horizontal pit parallel to the waterfall wall. Eventually, as the pit grows deeper, the waterfall collapses to be replaced by a steeply sloping stretch of river bed. In addition to gradual processes such as erosion, earth movement caused by earthquakes or landslides or volcano
Volcano
2. Bedrock3. Conduit 4. Base5. Sill6. Dike7. Layers of ash emitted by the volcano8. Flank| 9. Layers of lava emitted by the volcano10. Throat11. Parasitic cone12. Lava flow13. Vent14. Crater15...
es can cause a differential in land heights which interfere with the natural course of a water flow, and result in waterfalls.

A river sometimes flows over a large step in the rocks that may have been formed by a fault line. Waterfalls can occur along the edge of a glacial trough, whereby a stream or river flowing into a glacier
Glacier
A glacier is a large persistent body of ice that forms where the accumulation of snow exceeds its ablation over many years, often centuries. At least 0.1 km² in area and 50 m thick, but often much larger, a glacier slowly deforms and flows due to stresses induced by its weight...
continues to flow into a valley after the glacier has receded or melted. The large waterfalls in Yosemite Valley
Yosemite Valley
Yosemite Valley is a glacial valley in Yosemite National Park in the western Sierra Nevada mountains of California, carved out by the Merced River. The valley is about long and up to a mile deep, surrounded by high granite summits such as Half Dome and El Capitan, and densely forested with pines...
are examples of this phenomenon, which is referred to as a hanging valley. Another reason hanging valleys may form is where two rivers join and one is flowing faster than the other.
Waterfalls can be grouped into ten broad classes based on the average volume of water present on the fall (which depends on both the waterfall's average flow and its height) using a logarithmic scale
Logarithmic scale
A logarithmic scale is a scale of measurement using the logarithm of a physical quantity instead of the quantity itself.A simple example is a chart whose vertical axis increments are labeled 1, 10, 100, 1000, instead of 1, 2, 3, 4...
. Class 10 waterfalls include Niagara Falls
Niagara Falls
The Niagara Falls, located on the Niagara River draining Lake Erie into Lake Ontario, is the collective name for the Horseshoe Falls and the adjacent American Falls along with the comparatively small Bridal Veil Falls, which combined form the highest flow rate of any waterfalls in the world and has...
, Paulo Afonso Falls
Paulo Afonso Falls
Paulo Afonso Falls is a series of waterfalls on the São Francisco River in the northeastern section of Brazil adjacent to the city of Paulo Afonso. It stands high. Upstream of the falls, a hydroelectric dam, the Hidrelétrica de Angiquinho blocks the flow of the river...
and Khone Falls
Khone Falls
The Khone Falls and Pha Pheng Falls is a waterfall located in Champasak Province on the Mekong River in southern Laos, near the border with Cambodia. The Khone Falls are the largest in southeast Asia and they are the main reason that the Mekong is not fully navigable into China...
.

Classes of other well-known waterfalls include Victoria Falls
Victoria Falls
The Victoria Falls or Mosi-oa-Tunya is a waterfall located in southern Africa on the Zambezi River between the countries of Zambia and Zimbabwe.-Introduction:...
and Kaieteur Falls
Kaieteur Falls
Kaieteur Falls is a high-volume waterfall on the Potaro River in central Guyana, Potaro-Siparuni region. It is located inKaieteur National Park. It is 226 meters high when measured from its plunge over a sandstone and conglomerate cliff to the first break...
(Class 9); Rhine Falls
Rhine Falls
The Rhine Falls is the largest plain waterfall in Europe.The falls are located on the Upper Rhine between the municipalities of Neuhausen am Rheinfall and Laufen-Uhwiesen, near the town of Schaffhausen in northern Switzerland, between the cantons of Schaffhausen and Zürich. They are 150 m ...
and Gullfoss
Gullfoss
Gullfoss is a waterfall located in the canyon of Hvítá river in southwest Iceland.Gullfoss is one of the most popular tourist attractions in the country. The wide Hvítá rushes southward...
(Class 8); Angel Falls and Dettifoss
Dettifoss
Dettifoss is a waterfall in Vatnajökull National Park in Northeast Iceland, and is reputed to be the most powerful waterfall in Europe.It is situated on the Jökulsá á Fjöllum river, which flows from the Vatnajökull glacier and collects water from a large area in Northeast Iceland. The falls are 100...
(Class 7); Yosemite Falls
Yosemite Falls
Yosemite Falls is the highest measured waterfall in North America. Located in Yosemite National Park in the Sierra Nevada of California, it is a major attraction in the park, especially in late spring when the water flow is at its peak....
, Lower Yellowstone Falls
Yellowstone Falls
Yellowstone Falls consist of two major waterfalls on the Yellowstone River, within Yellowstone National Park, Wyoming, United States. As the Yellowstone river flows north from Yellowstone Lake, it leaves the Hayden Valley and plunges first over Upper Yellowstone Falls and then a quarter mile ...
and Umphang Thee Lor Sue Waterfall
Umphang Thee Lor Sue Waterfall
The Umphang Thee Lor Sue Waterfall is claimed to be the largest and highest waterfall in Thailand...
(Class 6); Sutherland Falls
Sutherland Falls
Sutherland Falls is a waterfall near Milford Sound in New Zealand's South Island. At 580 metres the falls were long believed to be the tallest waterfall in New Zealand...
(Class 5). 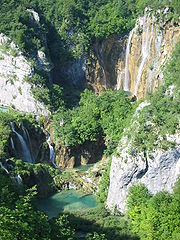