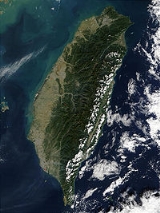 Overview
Taiwan also known, especially in the past, as Formosa (from , "Beautiful Island"), is the largest island of the same-named island group of East Asia
East Asia
East Asia or Eastern Asia is a subregion of Asia that can be defined in either geographical or cultural terms...
in the western Pacific Ocean
Pacific Ocean
The Pacific Ocean is the largest of the Earth's oceanic divisions. It extends from the Arctic in the north to the Southern Ocean in the south, bounded by Asia and Australia in the west, and the Americas in the east.At 165.2 million square kilometres in area, this largest division of the World...
and located off the southeastern coast of mainland China
Mainland China
Mainland China, the Chinese mainland or simply the mainland, is a geopolitical term that refers to the area under the jurisdiction of the People's Republic of China . According to the Taipei-based Mainland Affairs Council, the term excludes the PRC Special Administrative Regions of Hong Kong and...
. The island forms over 99% of the current territory of the Republic of China
Republic of China
The Republic of China , commonly known as Taiwan , is a unitary sovereign state located in East Asia. Originally based in mainland China, the Republic of China currently governs the island of Taiwan , which forms over 99% of its current territory, as well as Penghu, Kinmen, Matsu and other minor...
(ROC) following the Chinese Civil War
Chinese Civil War
The Chinese Civil War was a civil war fought between the Kuomintang , the governing party of the Republic of China, and the Communist Party of China , for the control of China which eventually led to China's division into two Chinas, Republic of China and People's Republic of...
in 1950. Due to this reason and the disputed political status of Republic of China
Political status of Taiwan
The controversy regarding the political status of Taiwan hinges on whether Taiwan, Penghu, Kinmen, and Matsu should remain effectively independent as territory of the Republic of China , become unified with the territories now governed by the People's Republic of China , or formally declare...
in the United Nations, the name "Taiwan" has also become the pars pro toto
Pars pro toto
Pars pro toto is Latin for "a part for the whole" where the name of a portion of an object or concept represents the entire object or context....
common name for the country itself.

Is there anyone out there that served in Taichung Taiwan during the 1969 to 1974? If yes please email me at alexfuentes1947@yahoo.com. I would like ...
More

what is siesta in taiwan?
More

1635    Dutch colonial forces on Taiwan launch a pacification campaign against native villages, resulting in Dutch control of the middle and south of the island.

1662    The Chinese general Koxinga seizes the island of Taiwan after a nine-month siege.

1683    The Qing Dynasty naval commander Shi Lang reaches Taiwan (under the Kingdom of Tungning) to receive the formal surrender of Zheng Keshuang and Liu Guoxuan after the Battle of Penghu.

1895    The Treaty of Shimonoseki between China and Japan is signed. This marks the end of the First Sino-Japanese War, and the defeated Qing Empire is forced to renounce its claims on Korea and to concede the southern portion of the Fengtien province, Taiwan and the Pescadores Islands to Japan.

1945    The Republic of China takes over administration of Taiwan following Japan's surrender to the Allies.

1949    Chinese Civil War: The People's Liberation Army begins its siege of Chengdu, the last Kuomintang-held city in mainland China, forcing President of the Republic of China Chiang Kai-shek and his government to retreat to Taiwan.

1964    The Republic of China (Taiwan) breaks off diplomatic relations with France.