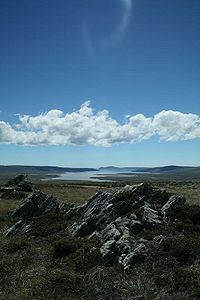 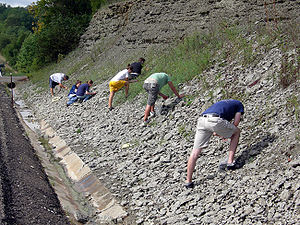 Outcrops allow direct observation and sampling of the bedrock
Bedrock
In stratigraphy, bedrock is the native consolidated rock underlying the surface of a terrestrial planet, usually the Earth. Above the bedrock is usually an area of broken and weathered unconsolidated rock in the basal subsoil...
in situ
In situ
In situ is a Latin phrase which translated literally as 'In position'. It is used in many different contexts.-Aerospace:In the aerospace industry, equipment on board aircraft must be tested in situ, or in place, to confirm everything functions properly as a system. Individually, each piece may...
for geologic
Geology
Geology is the science comprising the study of solid Earth, the rocks of which it is composed, and the processes by which it evolves. Geology gives insight into the history of the Earth, as it provides the primary evidence for plate tectonics, the evolutionary history of life, and past climates...
analysis and creating geologic map
Geologic map
A geologic map or geological map is a special-purpose map made to show geological features. Rock units or geologic strata are shown by color or symbols to indicate where they are exposed at the surface...
s. In situ measurements are critical for proper analysis of geological history and outcrops are therefore extremely important for understanding the geologic time scale
Geologic time scale
The geologic time scale provides a system of chronologic measurement relating stratigraphy to time that is used by geologists, paleontologists and other earth scientists to describe the timing and relationships between events that have occurred during the history of the Earth...
of earth history. Some of the types of information that can only be obtained from bedrock outcrops, or through precise drilling and coring operations, are; structural geology
Structural geology
Structural geology is the study of the three-dimensional distribution of rock units with respect to their deformational histories. The primary goal of structural geology is to use measurements of present-day rock geometries to uncover information about the history of deformation in the rocks, and...
features orientations (e.g. bedding planes, fold
Fold (geology)
The term fold is used in geology when one or a stack of originally flat and planar surfaces, such as sedimentary strata, are bent or curved as a result of permanent deformation. Synsedimentary folds are those due to slumping of sedimentary material before it is lithified. Folds in rocks vary in...
axes, foliation
Foliation
In mathematics, a foliation is a geometric device used to study manifolds, consisting of an integrable subbundle of the tangent bundle. A foliation looks locally like a decomposition of the manifold as a union of parallel submanifolds of smaller dimension....
), depositional features orientations (e.g. paleo-current directions, grading, facies
Facies
In geology, facies are a body of rock with specified characteristics. Ideally, a facies is a distinctive rock unit that forms under certain conditions of sedimentation, reflecting a particular process or environment....
changes), paleomagnetic orientations. Outcrops are also critically important for understanding fossil assemblages, paleo-environment, and evolution as they provide a record of relative changes within geologic strata
Stratum
In geology and related fields, a stratum is a layer of sedimentary rock or soil with internally consistent characteristics that distinguish it from other layers...
.

On Ordnance Survey
Ordnance Survey
Ordnance Survey , an executive agency and non-ministerial government department of the Government of the United Kingdom, is the national mapping agency for Great Britain, producing maps of Great Britain , and one of the world's largest producers of maps.The name reflects its creation together with...
maps in Great Britain
Great Britain
Great Britain or Britain is an island situated to the northwest of Continental Europe. It is the ninth largest island in the world, and the largest European island, as well as the largest of the British Isles...
, cliffs are distinguished from outcrops: cliffs have a continuous line along the top edge with lines protruding down, outcrops have a continuous line around each area of bare rock. An outcrop example in California
California
California is a state located on the West Coast of the United States. It is by far the most populous U.S. state, and the third-largest by land area...
is the Vasquez Rocks
Vasquez Rocks
Vasquez Rocks Natural Area Park is a 905-acre northern Los Angeles County, California, USA park acquired by the Los Angeles County government in the 1970s...
, familiar from location shooting
Location shooting
Location shooting is the practice of filming in an actual setting rather than on a sound stage or back lot. In filmmaking a location is any place where a film crew will be filming actors and recording their dialog. A location where dialog is not recorded may be considered as a second unit...
use in many films, composed of uplifted sandstone
Sandstone
Sandstone is a sedimentary rock composed mainly of sand-sized minerals or rock grains.Most sandstone is composed of quartz and/or feldspar because these are the most common minerals in the Earth's crust. Like sand, sandstone may be any colour, but the most common colours are tan, brown, yellow,...
.