Much of Interstate 71 in Ohio was intended to be State Route 1. State Route 1 was originally planned in the 1950s as a second Ohio Turnpike
Ohio Turnpike
The Ohio Turnpike, officially the James W. Shocknessy Ohio Turnpike, is a -long, limited-access toll highway in the U.S. state of Ohio, serving as a primary corridor to Chicago and Pittsburgh...
extending southwest to northeast across the state. It was planned to run from Cincinnati to Conneaut
Conneaut, Ohio
As of the census of 2000, there were 12,485 people, 5,038 households, and 3,410 families residing in the city. The population density was 473.4 people per square mile . There were 5,710 housing units at an average density of 216.5 per square mile...
and connect with an extension built across the panhandle of Pennsylvania
Pennsylvania
The Commonwealth of Pennsylvania is a U.S. state that is located in the Northeastern and Mid-Atlantic regions of the United States. The state borders Delaware and Maryland to the south, West Virginia to the southwest, Ohio to the west, New York and Ontario, Canada, to the north, and New Jersey to...
to the New York State Thruway
New York State Thruway
The New York State Thruway is a system of limited-access highways located within the state of New York in the United States. The system, known officially as the Governor Thomas E. Dewey Thruway for former New York Governor Thomas E. Dewey, is operated by the New York State Thruway Authority and...
. As the highway was being planned, the Federal Aid Highway Act of 1956 was enacted, and the project was converted from a toll road to a freeway. It was designated as State Route 1, since the Interstate Highway numbering system had not yet been implemented. Portions of the freeway began to be completed and opened in 1959 with the new Interstate Highway funding, and they were marked as State Route 1 as well as with their new Interstate Highway number. Since large gaps existed along the corridor where no freeway had yet been completed, existing two-lane or four-lane highways were also designated as State Route 1 in order to complete the route. 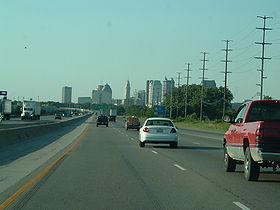 In 1960, State Route 1 followed Central Ave. in Cincinnati, to John Street, to Lincoln Park Drive (now Ezzard Charles Drive), to Freeman Avenue, to Western Avenue, to Spring Grove Avenue, to Colerain Avenue to Interstate 75
Interstate 75
Interstate 75 is a major north–south Interstate Highway in the Great Lakes and Southeastern regions of the United States. It travels from State Road 826 and State Road 924 in Hialeah, Florida to Sault Ste. Marie, Michigan, at the Ontario, Canada, border...
(at what is now the I-75/I-74 interchange); Interstate 75 from current I-74 interchange to West Carrollton
West Carrollton, Ohio
West Carrollton is a city in Montgomery County, Ohio, United States. The population was 13,143 at the 2010 census. It is part of the Dayton Metropolitan Statistical Area....
; U.S. Highway 25 (Dixie Drive) from West Carrollton to Interstate 70
Interstate 70
Interstate 70 is an Interstate Highway in the United States that runs from Interstate 15 near Cove Fort, Utah, to a Park and Ride near Baltimore, Maryland. It was the first Interstate Highway project in the United States. I-70 approximately traces the path of U.S. Route 40 east of the Rocky...
; Interstate 70 from Dixie Drive to near Enon (current I-70/OH-4 split); State Route 4 from near Enon
Enon, Ohio
Enon is a village in Clark County, Ohio, United States. The population was 2,638 at the 2000 census. It is part of the Springfield, Ohio Metropolitan Statistical Area.Enon is the headquarters of the Speedway SuperAmerica gas station chain....
to Springfield
Springfield, Ohio
Springfield is a city in the U.S. state of Ohio and the county seat of Clark County. The municipality is located in southwestern Ohio and is situated on the Mad River, Buck Creek and Beaver Creek, approximately west of Columbus and northeast of Dayton. Springfield is home to Wittenberg...
; U.S. Highway 40 from Springfield to Columbus
Columbus, Ohio
Columbus is the capital of and the largest city in the U.S. state of Ohio. The broader metropolitan area encompasses several counties and is the third largest in Ohio behind those of Cleveland and Cincinnati. Columbus is the third largest city in the American Midwest, and the fifteenth largest city...
; Broad St. (US 40) in Columbus, to 4th Street, to Summit/3rd Street (US 23), to Hudson Street, to Interstate 71; I-71 from Columbus to just east of Medina
Medina, Ohio
In the city the population was spread out with 29.9% under the age of 18, 7.2% from 18 to 24, 33.8% from 25 to 44, 18.8% from 45 to 64, and 10.2% who were 65 years of age or older. The median age was 33 years. For every 100 females there were 92.1 males...
(the only portion of Interstate 71 complete at the time); State Route 18 from near Medina to Montrose
Montrose, Ohio
Montrose is an area on the border between the Bath and Copley Townships of Summit County, Ohio, United States. It is an area of restaurants, stores, and businesses located along a stretch of State Route 18 near Interstate 77...
; U.S. Highway 21 from Montrose to Brecksville
Brecksville, Ohio
-External links:* * *...
; State Route 82 from Brecksville to Aurora; (an alternate State Route 1 ran from Twinsburg
Twinsburg, Ohio
As of the census of 2000, there were 17,006 people, 6,641 households, and 4,695 families residing in the city. The population density was 1,366.7 people per square mile . There were 6,871 housing units at an average density of 552.2 per square mile...
southeast along State Route 14 to Streetsboro
Streetsboro, Ohio
Streetsboro is a city in Portage County, Ohio, United States. It is formed from the former township of Streetsboro, which was formed from the Connecticut Western Reserve. It is nearly co-extant with the former Streetsboro Township; the village of Sugar Bush Knolls was also formed in part from a...
and then on State Route 43 to Aurora, in order to connect Highway 1 to the Ohio Turnpike;) State Route 306 from Aurora to State Route 84;
State Route 84 from State Route 306 to just west of what was then State Route 44; due south to Interstate 90
Interstate 90
Interstate 90 is the longest Interstate Highway in the United States at . It is the northernmost coast-to-coast interstate, and parallels US 20 for the most part. Its western terminus is in Seattle, at Edgar Martinez Drive S. near Safeco Field and CenturyLink Field, and its eastern terminus is in...
along what is now a section of State Route 44; and finally Interstate 90 to the Pennsylvania state line.

In Columbus, the portion of Interstate 71 that bounds Worthington's eastern edge was originally called the North Freeway. Costing US$13.8 million, it was constructed south from Route 161, arriving at 11th Avenue by August 1961. It took another year to construct the portion between 11th Avenue and 5th Avenue, mainly due to the need to construct a massive underpass under the Pennsylvania Railroad's
Pennsylvania Railroad
The Pennsylvania Railroad was an American Class I railroad, founded in 1846. Commonly referred to as the "Pennsy", the PRR was headquartered in Philadelphia, Pennsylvania....
Grogan Yard. Today, only two tracks cross the viaduct, and the rest of the structure supports a large, weedy field. By August 1962, the freeway had reached Fifth Avenue, and it reached downtown in November 1962.

The Highway 1 signage was removed in 1966 as the Interstate Highway numbers adequately marked the route and the state highway numbering was superfluous. The present day route of what was once planned as State Route 1 is Interstate 71 from Cincinnati to just northeast of Medina, Interstate 271 for its entire length from northeast of Medina
Medina, Ohio
In the city the population was spread out with 29.9% under the age of 18, 7.2% from 18 to 24, 33.8% from 25 to 44, 18.8% from 45 to 64, and 10.2% who were 65 years of age or older. The median age was 33 years. For every 100 females there were 92.1 males...
to Willoughby Hills
Willoughby Hills, Ohio
Willoughby Hills is a city in Lake County, Ohio, United States. The population was 8,595 at the 2000 census.-Geography:Willoughby Hills is located at ....
, and Interstate 90 from Willoughby Hills to the Pennsylvania state line at Conneaut.

Upon its completion, I-71 replaced State Route 3 as the primary highway link between Cincinnati, Columbus, and Cleveland.

Recently, the interchange at milepost 121 north of Columbus was reconstructed to allow access to the eastern extension of Gemini Place. Before that, it was a simple diamond interchange with Polaris Parkway (Ohio State Route 750).


Sports rivalries involving cities on I-71