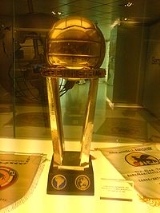 Encyclopedia
The European/South American Cup, commonly referred to as the World Club Championship, Intercontinental Cup or (after 1980) Toyota Cup, was a football competition endorsed by UEFA
UEFA
The Union of European Football Associations , almost always referred to by its acronym UEFA is the administrative and controlling body for European association football, futsal and beach soccer....
and CONMEBOL
CONMEBOL
The South American Football Confederation , commonly known as CONMEBOL , is the continental governing body of association football in South America and it is one of FIFA's six continental confederations...
, contested between the winners of the European Cup
UEFA Champions League
The UEFA Champions League, known simply the Champions League and originally known as the European Champion Clubs' Cup or European Cup, is an annual international club football competition organised by the Union of European Football Associations since 1955 for the top football clubs in Europe. It...
and the South American Copa Libertadores. The cup trophy bears the words "Coupe Européenne-Sudamericaine" ("European-South American Cup") at the top, which involve the ball. At the base of the trophy, there is a drawing of two maps, one from Europe, another from South America.

From its formation in 1960 to 1979, the competition was contested over a two legged tie, with a playoff if necessary until 1968, and penalty kick
Penalty kick
A penalty kick is a type of direct free kick in association football, taken from twelve yards out from goal and with only the goalkeeper of the defending team between the penalty taker and the goal.Penalty kicks are performed during normal play...
s later. From 1980 until 2004, the competition was contested over a single match held in Japan and organized by Toyota, which offered a secondary trophy, the Toyota Cup. The competition was considered until the creation of its successor, the FIFA Club World Cup
FIFA Club World Cup
The FIFA Club World Cup is a football competition between the champion clubs from all six continental confederations.The first FIFA Club World Championship took place in Brazil in January 2000...
, the most important tournament at international level in which any club could participate, for that reason all the winner teams were recognised as world club champions.

The last winner of the cup was Portuguese
Portugal
Portugal , officially the Portuguese Republic is a country situated in southwestern Europe on the Iberian Peninsula. Portugal is the westernmost country of Europe, and is bordered by the Atlantic Ocean to the West and South and by Spain to the North and East. The Atlantic archipelagos of the...
side Porto, defeating Colombia
Colombia
Colombia, officially the Republic of Colombia , is a unitary constitutional republic comprising thirty-two departments. The country is located in northwestern South America, bordered to the east by Venezuela and Brazil; to the south by Ecuador and Peru; to the north by the Caribbean Sea; to the...
n side Once Caldas
Once Caldas
Corporación Deportiva Once Caldas is a Colombian association football team, based in Manizales. They were the surprise winners of Copa Libertadores de América in 2004, mainly due to the performances of Juan Carlos Henao and Jhon Viáfara...
in a penalty shootout in 2004
2004 Intercontinental Cup
The 2004 Intercontinental Cup was a football match played on 12 December 2004 between FC Porto, winners of 2003–04 UEFA Champions League, and Once Caldas, winners of the 2004 Copa Libertadores. The match was played at the neutral venue of the International Stadium Yokohama in Yokohama, Japan, in...
.

The inauguration of the European Champion Clubs' Cup
UEFA Champions League
The UEFA Champions League, known simply the Champions League and originally known as the European Champion Clubs' Cup or European Cup, is an annual international club football competition organised by the Union of European Football Associations since 1955 for the top football clubs in Europe. It...
in 1955 and the Copa Libertadores in 1960 made the European/South American Cup viable. Spanish side Real Madrid
Real Madrid C.F.
Real Madrid Club de Fútbol , commonly known as Real Madrid, is a professional football club based in Madrid, Spain. The club have won a record 31 La Liga titles, the Primera División of the Liga de Fútbol Profesional , 18 Copas del Rey, 8 Spanish Super Cups, 1 Copa Eva Duarte and 1 Copa de la...
became the first club to win the cup in 1960, defeating Peñarol
C.A. Peñarol
Club Atlético Peñarol also known as Carboneros, Aurinegros and familiarly as Manya, is an Uruguayan sports club based in the Peñarol barrio, Montevideo, best known for its professional football team. The team plays their home matches in Estadio Centenario, the largest stadium in the country, but...
of Uruguay.

The viability of the competition came under fire until Toyota assumed the role of sponsor for the 1980 tournament; for the remainder of the competition's history, no club declined playing in the Intercontinental Cup, and the competition always took the form of a single match held on neutral ground, in Toyota's home country Japan
Japan
Japan is an island nation in East Asia. Located in the Pacific Ocean, it lies to the east of the Sea of Japan, China, North Korea, South Korea and Russia, stretching from the Sea of Okhotsk in the north to the East China Sea and Taiwan in the south...
. The sponsor created a new trophy, the Toyota Cup, which was coupled with the original one: if the Intercontinental Cup was give to winners' captain, the Toyota Cup was given to the vice-captain.

From 1960 to 1979, the Intercontinental Cup was played in two legs. Between 1960 and 1968, the cup was decided on points only, the same format used by CONMEBOL
CONMEBOL
The South American Football Confederation , commonly known as CONMEBOL , is the continental governing body of association football in South America and it is one of FIFA's six continental confederations...
to determine the winner of the Copa Libertadores final through 1987. Because of this format, a third match was needed when both teams were equal on points. Commonly this match was host by the continent where the last game of the series was played. From 1969 through 1979, the competition adopted the European
UEFA
The Union of European Football Associations , almost always referred to by its acronym UEFA is the administrative and controlling body for European association football, futsal and beach soccer....
standard method of aggregate score, with away goals
Away goals rule
The away goals rule is a method of breaking ties in association football and other sports when teams play each other twice, once at each team's home ground. By the away goals rule, the team that has scored more goals "away from home" will win if scores are otherwise equal...
.

Starting in 1980, the final became a single match. Up until 2000, the matches were held at Tokyo's
Tokyo
, ; officially , is one of the 47 prefectures of Japan. Tokyo is the capital of Japan, the center of the Greater Tokyo Area, and the largest metropolitan area of Japan. It is the seat of the Japanese government and the Imperial Palace, and the home of the Japanese Imperial Family...
National Stadium. Finals since 2002 were held at the Yokohama International Stadium, also the venue of the 2002 FIFA World Cup
2002 FIFA World Cup
The 2002 FIFA World Cup was the 17th staging of the FIFA World Cup, held in South Korea and Japan from 31 May to 30 June. It was also the first World Cup held in Asia, and the last in which the golden goal rule was implemented. Brazil won the tournament for a record fifth time, beating Germany 2–0...
final.

Carlos Bianchi
Carlos Bianchi
Carlos Arcecio Bianchi , popularly known as El Virrey , is a prolific Argentine football forward turned manager...
won three editions as coach: one with Vélez Sársfield
Club Atlético Vélez Sársfield
Club Atlético Vélez Sársfield is a sports club based in the Liniers neighborhood of western Buenos Aires, Argentina. Vélez is best known for its football team, that plays in the Argentine Primera División, the top level of the Argentine league system...
in 1994, and 2 with Boca Juniors
Boca Juniors
Club Atlético Boca Juniors is an Argentine sports club based in La Boca neighborhood of Buenos Aires. It is best known for its professional football team, which currently plays in the Primera División....
in 2000 and 2003.

Luis Cubilla
Luís Cubilla
Luis Alberto Cubilla Almeida is a former Uruguayan football player and coach. He had a successful playing career winning 15 major titles...
and Juan Mujica
Juan Mujica
Juan Martín Mujica is a former Uruguayan football player and manager, who represented his country at the 1970 FIFA World Cup.Mujica made 22 appearances for the Uruguay national football team between 1966 and 1970, scoring 2 goals....
, 2 Uruguayans won cups both as players and coaches:


Man of the Match