Encyclopedia
Karaiskakis Stadium is in the Neo Faliro
Faliro
Faliro is a seaside suburb 8 km southwest of downtown Athens. There are two communities sharing the name: Palaio and Neo Faliro. Palaio Faliro is a municipality, whereas Neo Faliro is part of the town of Piraeus...
area of Piraeus
Piraeus
Piraeus is a city in the region of Attica, Greece. Piraeus is located within the Athens Urban Area, 12 km southwest from its city center , and lies along the east coast of the Saronic Gulf....
, Greece
Greece
Greece , officially the Hellenic Republic , and historically Hellas or the Republic of Greece in English, is a country in southeastern Europe....
. It is the home ground of Olympiacos F.C. and is named after Georgios Karaiskakis (Γεώργιος Καραϊσκάκης)
Georgios Karaiskakis
Georgios Karaiskakis born Georgios Iskos was a famous Greek klepht, armatolos, military commander, and a hero of the Greek War of Independence.- Early life :...
, hero of the Greek War of Independence
Greek War of Independence
The Greek War of Independence, also known as the Greek Revolution was a successful war of independence waged by the Greek revolutionaries between...
, who was mortally wounded near the area.

It was renovated during the 1960s and was completely rebuilt in 2004 into a 32,115 capacity, all seater stadium
Stadium
A modern stadium is a place or venue for outdoor sports, concerts, or other events and consists of a field or stage either partly or completely surrounded by a structure designed to allow spectators to stand or sit and view the event.)Pausanias noted that for about half a century the only event...
, ready for the football competition
Football at the 2004 Summer Olympics
The football tournament at the 2004 Summer Olympics started on 11 August, , and ended on 28 August.The men's tournament is played by U-23 national teams, with up to three over age players allowed per squad...
of the 2004 Summer Olympics
2004 Summer Olympics
The 2004 Summer Olympic Games, officially known as the Games of the XXVIII Olympiad, was a premier international multi-sport event held in Athens, Greece from August 13 to August 29, 2004 with the motto Welcome Home. 10,625 athletes competed, some 600 more than expected, accompanied by 5,501 team...
.

The stadium was totally demolished and built again from the beginning, facing a different direction. This complete reconstruction took a record time of only 14 months, finishing just in time for the Olympic Games. 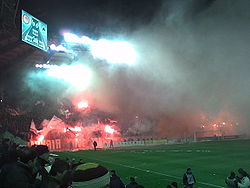 After the last deal ended in 1998, Olympiacos is using the stadium once again, on a 49-year lease from 2003 until 2052 and is traditionally identified as the club's true home. In 2002, Olympiacos President Socratis Kokkalis, when announcing the project to rebuild Karaiskakis, expressed his wish for the new stadium to be also used by Ethnikos F.C., if they wanted, as Karaiskaki is the historic home of both Olympiacos and Ethnikos. Therefore, in the contract signed by the Hellenic Olympic Committee, the owner of the stadium, and Olympiacos, a clause was included, stating that should Ethnikos wish to return to the stadium, they may do so without sharing any significant maintenance or other stadium-related costs, as those are covered by Olympiacos. As of the 2010/11 season though, Ethnikos has not yet opted to do so.

The ticket sales average higher than any team's in recent decades for the Super League Greece
Super League Greece
The Superleague Greece is the highest professional football league in Greece. It was formed on July 16, 2006 and replaced Alpha Ethniki at the top of the Greek football league system. The league consists of 16 teams and runs from August to May, with teams playing 30 games each...
history (rarely have they dropped under the 25,000 mark) and are not expected to drop in the foreseeable future.

Sales for national team matches had also been higher, but this was for the most part due to Greece's
Greece national football team
The Greece national football team represents Greece in association football and is controlled by the Hellenic Football Federation, the governing body for football in Greece. Greece's home ground is Karaiskakis Stadium in Piraeus and their head coach is Fernando Santos...
success in the Euro 2004. As of 2008 and after Greece's disappointing Euro 2008 performance, the attendance of national team matches dropped drastically, leading the Ministry of Sport to change the venue to Heraklion, Crete
Heraklion
Heraklion, or Heraclion is the largest city and the administrative capital of the island of Crete, Greece. It is the 4th largest city in Greece....
.

In June 2005, Karaiskaki bhosted a movie theatre (Ciné Karaiskakis) with a cinema screen that is 20 m long and 10 m wide, operating daily between 9 and 11 p.m. (6 and 8 p.m. UTC) and later, every weekend. The movie screen featured movies including Batman Begins
Batman Begins
Batman Begins is a 2005 American superhero action film based on the fictional DC Comics character Batman, directed by Christopher Nolan. It stars Christian Bale as Batman, along with Michael Caine, Gary Oldman, Liam Neeson, Katie Holmes, Cillian Murphy, Morgan Freeman, Ken Watanabe, Tom Wilkinson,...
and others. The stadium operated as a movie theatre for the last time on Saturday August 13, 2005.

Twenty-one supporters of Olympiacos lost their lives in "Gate 7" (Θύρα 7) of the stadium, after a game between Olympiacos and AEK Athens FC
AEK Athens FC
AEK Athens F.C. , the Athletic Union of Constantinople, is a Greek association football club based in the city of Athens, Greece. Outside Greece, the club is also known as AEK Athens, however, the word Athens is not part of the club's official title.Established in Athens in 1924 by Greek refugees...
(that ended 6–0), on February 8, 1981; an incident widely known as the Karaiskaki Stadium disaster
Karaiskaki Stadium disaster
The Karaiskakis Stadium disaster was an incident that occurred on 8 February 1981, in the Karaiskakis Stadium in Neo Faliro, Greece, after the conclusion of a football match between Olympiacos and AEK Athens...
. In memory of this event, at the tribune where Gate 7 is now, twenty-one seats are black colored instead of red, shaping the number "7". A monument on the eastern side of the stadium bears the names of the twenty-one supporters killed on that day in the stadium.

Karaiskakis Stadium is classified among 13 other ones around Europe
Europe
Europe is, by convention, one of the world's seven continents. Comprising the westernmost peninsula of Eurasia, Europe is generally 'divided' from Asia to its east by the watershed divides of the Ural and Caucasus Mountains, the Ural River, the Caspian and Black Seas, and the waterways connecting...
as a 4-star football stadium by the UEFA
UEFA
The Union of European Football Associations , almost always referred to by its acronym UEFA is the administrative and controlling body for European association football, futsal and beach soccer....
organisation, allowing it to host the UEFA Europa League Final if chosen. It hosts 40 VIP lounges and suites, that can hold up to 472 persons, a press conference hall, that can hold up to 130 seats, 200 seats for press and media coverage, an entire shopping mall, with restaurants, cafés, retail and clothing stores, a gym and a Museum dedicated to the history of Olympiacos CFP
Olympiacos CFP
----Olympiacos Club of Fans of Piraeus, , , transliterated Olympiakos Sindesmos Filathlon Pireos, is the most popular multisport club and the most successful in Greece, based in Piraeus....
. There are 10 automated ticket selling machines around the stadium enabling reservations through the internet or by phone. There is no extra charge for the parking area, which takes up to 2,500 cars. Due to its design, the stadium's tribunes have the ability to empty within 7 minutes. The stadium also has restaurants and stores opened during concerts and games and sometimes open with the daily general timetable of most Greek stores and shops.

The stadium is easily accessed through the Metro railway, at the station "Faliro", which is 30 minutes from Athens city centre, and through the Mass Transit System, at the station "S.E.F." (English transliteration of the initials for Stádion Irínis ke Philías, "Stadium of Peace and Friendship"), which is around 40 minutes from the centre of Athens
Athens
Athens , is the capital and largest city of Greece. Athens dominates the Attica region and is one of the world's oldest cities, as its recorded history spans around 3,400 years. Classical Athens was a powerful city-state...
.