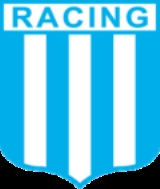 Encyclopedia
Racing Club (ˈrasiŋ ˈkluβ) is an Argentine
Argentina
Argentina , officially the Argentine Republic , is the second largest country in South America by land area, after Brazil. It is constituted as a federation of 23 provinces and an autonomous city, Buenos Aires...
professional football club from Avellaneda
Avellaneda
Avellaneda is a port city in the province of Buenos Aires, Argentina, and the seat of the Avellaneda Partido, whose population was 328,980 as per the ....
, a suburb
Suburb
The word suburb mostly refers to a residential area, either existing as part of a city or as a separate residential community within commuting distance of a city . Some suburbs have a degree of administrative autonomy, and most have lower population density than inner city neighborhoods...
of Greater Buenos Aires
Greater Buenos Aires
Greater Buenos Aires is the generic denomination to refer to the megalopolis comprising the autonomous city of Buenos Aires and the conurbation around it, over the province of Buenos Aires—namely the adjacent 24 partidos or municipalities—which nonetheless do not constitute a single administrative...
. Founded in 1903, Racing has been historically considered one of the "big five" clubs of Argentine football. The club plays in the Primera División, the top division of the Argentine league system
Argentine football league system
The Argentine football league system consists of two national divisions , and a series of regionalized lower divisions...
.

The first team play their home games in the Estadio Presidente Juan Domingo Perón, nicknamed El Cilindro de Avellaneda (in English: "Avellaneda's Cylinder"). The team is nicknamed La Academia ("The Academy"), earned for their initial run of 7 consecutive championships during the amateur era,

In 1967, Racing won their first international competition, the Copa Libertadores. As Copa Libertadores champions, they faced Scottish Celtic F.C.
Celtic F.C.
Celtic Football Club is a Scottish football club based in the Parkhead area of Glasgow, which currently plays in the Scottish Premier League. The club was established in 1887, and played its first game in 1888. Celtic have won the Scottish League Championship on 42 occasions, most recently in the...
in the 1967 Intercontinental Cup
1967 Intercontinental Cup
The 1967 Intercontinental Cup was a football tie held over two legs in 1967 between the winners of the 1966–67 European Cup, Celtic, and Racing, winners of the 1967 Copa Libertadores....
. The club became the first Argentine team to win that tournament, after defeating Celtic in the controversial third final.

In 1983, the club was relegated to the second division. They returned to the principal league, in 1985 with Alfio Basile as the Coach.

Racing won their third international competition in 1988, when they obtained the Supercopa Sudamericana.

Racing faced economical problems that erupted in 1993, when the club declared bankruptcy. In 2000, Racing switched management to the Blanquiceleste S.A corporation
Corporation
A corporation is created under the laws of a state as a separate legal entity that has privileges and liabilities that are distinct from those of its members. There are many different forms of corporations, most of which are used to conduct business. Early corporations were established by charter...
. Racing won the 2001 Apertura Title, 35 years after their last local championship in 1966. In 2003, Racing played the Copa Libertadores 2003. They finished First in their Group (Group 6) but lost in the Round of 16 against América de Cali
América de Cali
Corporación Deportiva América, commonly known as América de Cali or simply América is a Colombian football club based in Cali. They currently play in the Categoría Primera A, the top-flight professional league in the country....
. In 2008, the club switched back management to become a civic association again.

In 2010, Racing almost qualified to Copa Libertadores 2011, but Independiente won the Copa Sudamericana 2010, this way preventing Racing to play the Cup.

Home games are played at the Estadio Juan Domingo Perón
Estadio Juan Domingo Perón
The Estadio Presidente Juan Domingo Perón is a stadium located in Avellaneda, Argentina, a suburb of Buenos Aires. It is situated on the streets of Corbatta Mozart adjoining with Italy and Columbus.Racing Club owns the stadium and plays its home matches there...
, commonly known as El Cilindro de Avellaneda. The stadium has a capacity of 64,161 and is located at the intersection of Mozart and Oreste Omar Corbatta streets, in Avellaneda. It was inaugurated on September 3, 1950, before a match against Vélez Sársfield
Club Atlético Vélez Sársfield
Club Atlético Vélez Sársfield is a sports club based in the Liniers neighborhood of western Buenos Aires, Argentina. Vélez is best known for its football team, that plays in the Argentine Primera División, the top level of the Argentine league system...
which was won by Racing 1-0.