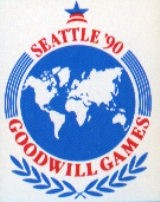 The Goodwill Games was an international sports competition, created by Ted Turner
Ted Turner
Robert Edward "Ted" Turner III is an American media mogul and philanthropist. As a businessman, he is known as founder of the cable news network CNN, the first dedicated 24-hour cable news channel. In addition, he founded WTBS, which pioneered the superstation concept in cable television...
in reaction to the political troubles surrounding the Olympic Games
Olympic Games
The Olympic Games is a major international event featuring summer and winter sports, in which thousands of athletes participate in a variety of competitions. The Olympic Games have come to be regarded as the world’s foremost sports competition where more than 200 nations participate...
of the 1980s. In 1979, the invasion of Afghanistan caused the United States and other Western countries
Western world
The Western world, also known as the West and the Occident , is a term referring to the countries of Western Europe , the countries of the Americas, as well all countries of Northern and Central Europe, Australia and New Zealand...
to boycott the 1980 Summer Olympics
1980 Summer Olympics
The 1980 Summer Olympics, officially known as the Games of the XXII Olympiad, was an international multi-sport event celebrated in Moscow in the Soviet Union. In addition, the yachting events were held in Tallinn, and some of the preliminary matches and the quarter-finals of the football tournament...
in Moscow, an act reciprocated when the Soviet
Soviet Union
The Soviet Union , officially the Union of Soviet Socialist Republics , was a constitutionally socialist state that existed in Eurasia between 1922 and 1991....
and other Eastern Bloc countries (with the exception of Romania) boycotted the 1984 Summer Olympics
1984 Summer Olympics
The 1984 Summer Olympics, officially known as the Games of the XXIII Olympiad, was an international multi-sport event held in Los Angeles, California, United States in 1984...
in Los Angeles
Los Angeles, California
Los Angeles , with a population at the 2010 United States Census of 3,792,621, is the most populous city in California, USA and the second most populous in the United States, after New York City. It has an area of , and is located in Southern California...
.

The first Games, held in Moscow in 1986
1986 Goodwill Games
The 1986 Goodwill Games was the inaugural edition of the international multi-sport event created by Ted Turner, which was held from 5 – 20 July 1986. The main stadium was the Olympic Stadium in Moscow, Soviet Union...
, featured 182 events and attracted over 3,000 athletes representing 79 countries. World records were set by Sergey Bubka (pole vault
Pole vault
Pole vaulting is a track and field event in which a person uses a long, flexible pole as an aid to leap over a bar. Pole jumping competitions were known to the ancient Greeks, as well as the Cretans and Celts...
), Jackie Joyner-Kersee
Jackie Joyner-Kersee
Jacqueline "Jackie" Joyner-Kersee is a retired American athlete, ranked among the all-time greatest athletes in the women's heptathlon as well as in the women's long jump. She won three gold, one silver, and two bronze Olympic medals, in those four different events...
(heptathlon
Heptathlon
A heptathlon is a track and field athletics combined events contest made up of seven events. The name derives from the Greek hepta and athlon . A competitor in a heptathlon is referred to as a heptathlete.-Women's Heptathlon:...
), and both the men and women's 200 m cycle racing, by East Germany's Michael Hübner
Michael Hübner
Michael Hübner is a German former professional sprint track cyclist, who became world champion in sprint, Keirin and team sprint.- External links :...
and the Soviet Union's Erika Salumäe
Erika Salumäe
Erika Salumäe is an Estonian track bicycle racer who won the first Olympic gold medal for Estonia after the country regained its independence in 1991.She was born in Pärnu. She trained at VSS Kalev in Tallinn...
, respectively. World records also fell at the 1990 Games
1990 Goodwill Games
The 1990 Goodwill Games was the second edition of the international multi-sport event created by Ted Turner, which was held between July 20 and August 5, 1990. Following an inaugural edition in Moscow, the second games took place in Seattle, United States, highlighting the competition's role in...
in Seattle, to Mike Barrowman
Mike Barrowman
Michael Ray Barrowman is an American former swimmer, one of the pioneers of the "Wave-Style" Breaststroke technique. Prior to attending University of Michigan, he trained with Rockville-Montgomery Swim Club and Curl-Burke Swim Club in Maryland.He placed 4th in the 1988 Summer Olympics in the...
in the 200 m breaststroke and Nadezhda Ryashkina
Nadezhda Ryashkina
Nadezhda Ryashkina is a retired female race walker from Russia. She set the world record in the women's 10 km race walk event on July 25, 1990, clocking 41:56.23, in Seattle at the 1990 Goodwill Games. Ryashkina equalled Liu Hongyu's world record in the 20 km event with a total time of 1:27:30,...
in the 10 km walk.

The 1994 Games
1994 Goodwill Games
The 1994 Goodwill Games was the third edition of the multi-sport event, created by Ted Turner, which was held in Saint Petersburg, Russia between July 23 and August 7, 1994...
were held in Saint Petersburg
Saint Petersburg
Saint Petersburg is a city and a federal subject of Russia located on the Neva River at the head of the Gulf of Finland on the Baltic Sea...
, Russia, in the first competition since the Soviet Union had been replaced by fifteen independent republics. Russians set five world records in the weightlifting section, and the games were the first major international event to feature beach volleyball
Beach volleyball
Beach volleyball, or sand volleyball, is an Olympic team sport played by two teams of two players on a sand court divided by a net.Like volleyball, the object of the game is to send the ball over the net in order to ground it on the opponent’s court, and to prevent the same effort by the opponent....
, which would appear at the Olympics for the first time at the 1996 Atlanta Games. Ted Turner's last games were in 1998
1998 Goodwill Games
The 1998 Goodwill Games was the fourth edition of the international sports competition, created by Ted Turner in reaction to the political troubles surrounding the Olympic Games of the 1980s. The competition was held in New York, United States from July 19 to August 2, 1998.-Medal table:-References:*...
in New York City, with memorable highlights including Joyner-Kersee winning her fourth straight heptathlon title, and the U.S. 4x400m relay team setting a world's best time.

The games were later bought from Ted Turner by Time Warner
Time Warner
Time Warner is one of the world's largest media companies, headquartered in the Time Warner Center in New York City. Formerly two separate companies, Warner Communications, Inc...
when Turner's company merged, Turner explained during a live interview at 2009 Denver SportAccord conference that although the demise of the games caused by short-sighted management of Time Warner; Turner, who left the company, admits "If I'd have stayed there the Goodwill Games would not have been canceled." . Turner is absolute that the games must return, as a bridge to restore cultural contact between Russia
Russia
Russia or , officially known as both Russia and the Russian Federation , is a country in northern Eurasia. It is a federal semi-presidential republic, comprising 83 federal subjects...
and America as relationships have steadily disintegrated since the Cold War through apathy. With both countries controlling 95% of the nuclear arsenals pointed at each other. He insists that it's virtually impossible for there would have been World Wars had the Olympics not been boycotted, because the nations would be too focused on the issue of training teams, that the countries don't want to "mess up their chances". . Turner, anticipates the return of the games, along with other enterprises he is working on.

Time Warner organized the Brisbane 2001 Games
2001 Goodwill Games
The 2001 Goodwill Games was the fifth and final edition of the international multi-sport event. The competition was held in Brisbane, Australia from 29 August to 9 September 2001. A total around 1300 athletes took part in 14 sporting competitions....
, before announcing that it would be the last. The 2001 edition witnessed Australia win the most medals with 75, but it received very low television ratings
Nielsen Ratings
Nielsen ratings are the audience measurement systems developed by Nielsen Media Research, in an effort to determine the audience size and composition of television programming in the United States...
in the United States. Nevertheless, critics praised Turner Network Television
Turner Network Television
Turner Network Television is an American cable television channel created by media mogul Ted Turner and currently owned by the Turner Broadcasting System division of Time Warner...
for showing the games live, rather than on tape delay
Broadcast delay
In radio and television, broadcast delay refers to the practice of intentionally delaying broadcast of live material. A short delay is often used to prevent profanity, bloopers, violence, or other undesirable material from making it to air, including more mundane problems such as technical...
.