Encyclopedia
The 1980 Summer Olympics, officially known as the Games of the XXII Olympiad, was an international multi-sport event
Multi-sport event
A multi-sport event is an organized sporting event, often held over multiple days, featuring competition in many different sports between organized teams of athletes from nation-states. The first major, modern, multi-sport event of international significance was the modern Olympic Games.Many...
celebrated in Moscow
Moscow
Moscow is the capital, the most populous city, and the most populous federal subject of Russia. The city is a major political, economic, cultural, scientific, religious, financial, educational, and transportation centre of Russia and the continent...
in the Soviet Union
Soviet Union
The Soviet Union , officially the Union of Soviet Socialist Republics , was a constitutionally socialist state that existed in Eurasia between 1922 and 1991....
. In addition, the yachting
Yachting
Yachting refers to recreational sailing or boating, the specific act of sailing or using other water vessels for sporting purposes.-Competitive sailing:...
events were held in Tallinn
Tallinn
Tallinn is the capital and largest city of Estonia. It occupies an area of with a population of 414,940. It is situated on the northern coast of the country, on the banks of the Gulf of Finland, south of Helsinki, east of Stockholm and west of Saint Petersburg. Tallinn's Old Town is in the list...
, and some of the preliminary matches and the quarter-finals of the football tournament were held in Leningrad
Saint Petersburg
Saint Petersburg is a city and a federal subject of Russia located on the Neva River at the head of the Gulf of Finland on the Baltic Sea...
, Kiev
Kiev
Kiev or Kyiv is the capital and the largest city of Ukraine, located in the north central part of the country on the Dnieper River. The population as of the 2001 census was 2,611,300. However, higher numbers have been cited in the press....
, and Minsk
Minsk
- Ecological situation :The ecological situation is monitored by Republican Center of Radioactive and Environmental Control .During 2003–2008 the overall weight of contaminants increased from 186,000 to 247,400 tons. The change of gas as industrial fuel to mazut for financial reasons has worsened...
. The 1980 Games were the first to be staged in Eastern Europe.

The only two cities to bid for the 1980 Summer Olympics were Moscow and Los Angeles. The choice between them was made on 23 October 1974 in the 75th IOC Session in Vienna, Austria. 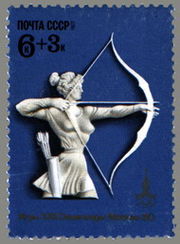 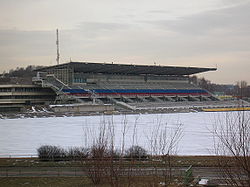 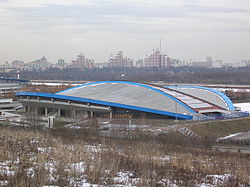 These are the top medal-collecting nations for the 1980 Games. (Host country is highlighted).

A total of 81 nations were represented at the Moscow Games, but Liberia withdrew after marching in the Opening Ceremony, so a total of 80 nations actually competed.

Despite the large boycott, six nations made their first Olympic appearance in 1980: Angola, Botswana, Jordan, Laos, Mozambique, and Seychelles. Cyprus made its debut at the Summer Olympics, but had appeared earlier at the 1980 Winter Olympics
1980 Winter Olympics
The 1980 Winter Olympics, officially known as the XIII Olympic Winter Games, was a multi-sport event which was celebrated from 13 February through 24 February 1980 in Lake Placid, New York, United States of America. This was the second time the Upstate New York village hosted the Games, after 1932...
in Lake Placid
Lake Placid, New York
Lake Placid is a village in the Adirondack Mountains in Essex County, New York, United States. As of the 2000 census, the village had a population of 2,638....
. Sri Lanka competed for the first time under its new name (previously as Ceylon), Benin had competed previously as Dahomey and Zimbabwe competed for the first time under that name (previously as Rhodesia).

In the following list, the number in parentheses indicates the number of athletes from each nation that competed in Moscow. Nations in italics competed under the Olympic flag.
{

65 countries and regions invited didn't take part in the 1980 Olympic Games. Many of these followed the United States' boycott initiative, while others (such as Zaire) cited economic reasons for not coming.