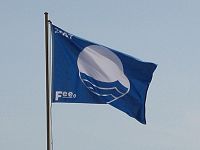 The Blue Flag is a trademark
Trademark
A trademark, trade mark, or trade-mark is a distinctive sign or indicator used by an individual, business organization, or other legal entity to identify that the products or services to consumers with which the trademark appears originate from a unique source, and to distinguish its products or...
owned by FEE which is a not-for-profit
Non-profit organization
Nonprofit organization is neither a legal nor technical definition but generally refers to an organization that uses surplus revenues to achieve its goals, rather than distributing them as profit or dividends...
, non-governmental organisation consisting of 65 organisations in 60 member countries in Europe
Europe
Europe is, by convention, one of the world's seven continents. Comprising the westernmost peninsula of Eurasia, Europe is generally 'divided' from Asia to its east by the watershed divides of the Ural and Caucasus Mountains, the Ural River, the Caspian and Black Seas, and the waterways connecting...
, Africa
Africa
Africa is the world's second largest and second most populous continent, after Asia. At about 30.2 million km² including adjacent islands, it covers 6% of the Earth's total surface area and 20.4% of the total land area...
, Oceania
Oceania
Oceania is a region centered on the islands of the tropical Pacific Ocean. Conceptions of what constitutes Oceania range from the coral atolls and volcanic islands of the South Pacific to the entire insular region between Asia and the Americas, including Australasia and the Malay Archipelago...
, Asia
Asia
Asia is the world's largest and most populous continent, located primarily in the eastern and northern hemispheres. It covers 8.7% of the Earth's total surface area and with approximately 3.879 billion people, it hosts 60% of the world's current human population...
, North America
North America
North America is a continent wholly within the Northern Hemisphere and almost wholly within the Western Hemisphere. It is also considered a northern subcontinent of the Americas...
and South America
South America
South America is a continent situated in the Western Hemisphere, mostly in the Southern Hemisphere, with a relatively small portion in the Northern Hemisphere. The continent is also considered a subcontinent of the Americas. It is bordered on the west by the Pacific Ocean and on the north and east...
.

Certificates, which FEE refers to as awards, are issued on an annual basis to beaches and marinas of FEE member countries. The awards are announced yearly on 5 June for Europe, Canada, Morocco, Tunisia and other countries in a similar geographic location, and on 1 November for the Caribbean, New Zealand, South Africa and other countries in the southern hemisphere
Southern Hemisphere
The Southern Hemisphere is the part of Earth that lies south of the equator. The word hemisphere literally means 'half ball' or "half sphere"...
.

Consistently in the past few years Spain
Spain
Spain , officially the Kingdom of Spain languages]] under the European Charter for Regional or Minority Languages. In each of these, Spain's official name is as follows:;;;;;;), is a country and member state of the European Union located in southwestern Europe on the Iberian Peninsula...
has topped the list for the most Blue Flags awarded, with Greece
Greece
Greece , officially the Hellenic Republic , and historically Hellas or the Republic of Greece in English, is a country in southeastern Europe....
coming second (like in 2008) and France
France
The French Republic , The French Republic , The French Republic , (commonly known as France , is a unitary semi-presidential republic in Western Europe with several overseas territories and islands located on other continents and in the Indian, Pacific, and Atlantic oceans. Metropolitan France...
in third place.

Cyprus
Cyprus
Cyprus , officially the Republic of Cyprus , is a Eurasian island country, member of the European Union, in the Eastern Mediterranean, east of Greece, south of Turkey, west of Syria and north of Egypt. It is the third largest island in the Mediterranean Sea.The earliest known human activity on the...
with 53 Blue Flag beaches has three records:

The Blue Flag was created in France in 1985 as a pilot scheme where French coastal municipalities were awarded the Blue Flag on the basis of criteria covering sewage treatment and bathing water quality.

1987 was the "European Year of the Environment" and the European Commission was responsible for developing the European Community activities of that year. The Foundation for Environmental Education in Europe (FEEE) presented the concept of the Blue Flag to the Commission, and it was agreed to launch the Blue Flag Programme as one of several "European Year of the Environment" activities in the Community.

The French concept of the Blue Flag was developed on European level to include other areas of environmental management, such as waste management and coastal planning and protection. Besides beaches marinas also became eligible for the Blue Flag.

There have been increases in the numbers of Blue Flags awarded each year. The criteria have during these years been changed to more strict criteria. As an example, in 1992 the Programme started using the restrictive guideline values in the EEC Bathing Water Directive as imperative criteria, and this was also the year where all Blue Flag criteria became the same in all participating countries.


Outside the European Union

In 2001, FEEE rules were changed to allow non-European national organisations, sharing the objectives of FEEE, to become members, and changed its name by dropping Europe from its name, becoming the Foundation for Environmental Education (FEE).

Several organisations and authorities outside the European Union have joined FEE. FEE has been cooperating with UNEP and UN WTO on extending the Programme to areas outside Europe. South Africa, Canada, Morocco, Tunisia, New Zealand and four countries in the Caribbean region are members of FEE. Aruba, Brazil and Malta are currently in the pilot phase of the Programme and Jordan, Macedonia, Turks & Caicos Islands, Ukraine and United Arab Emirates have started the implementation of the Blue Flag Programme.

FEE standards allow for regional variations in beach criteria to reflect specific environmental conditions of a region. As of 2006 an international set of criteria is being used with some variations.

In 2010 over 3450 beaches and marinas globally were awarded the Blue Flag.

Eight countries are currently running the programme in the pilot phase.