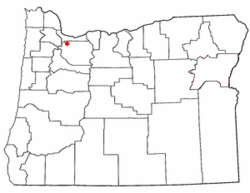 The Willamette Valley (icon ) is the most populated region in the state of Oregon
Oregon
Oregon is a state in the Pacific Northwest region of the United States. It is located on the Pacific coast, with Washington to the north, California to the south, Nevada on the southeast and Idaho to the east. The Columbia and Snake rivers delineate much of Oregon's northern and eastern...
of the United States
United States
The United States of America is a federal constitutional republic comprising fifty states and a federal district...
. Located in the state's northwest, the region is surrounded by tall mountain ranges to the east, west and south and the valley's floor is broad, flat and fertile because of Ice Age conditions. Located centrally inside the large alluvial-deposited
Alluvium
Alluvium is loose, unconsolidated soil or sediments, eroded, deposited, and reshaped by water in some form in a non-marine setting. Alluvium is typically made up of a variety of materials, including fine particles of silt and clay and larger particles of sand and gravel...
soils of the Willamette River
Willamette River
The Willamette River is a major tributary of the Columbia River, accounting for 12 to 15 percent of the Columbia's flow. The Willamette's main stem is long, lying entirely in northwestern Oregon in the United States...
drainage basin
Drainage basin
A drainage basin is an extent or an area of land where surface water from rain and melting snow or ice converges to a single point, usually the exit of the basin, where the waters join another waterbody, such as a river, lake, reservoir, estuary, wetland, sea, or ocean...
, the valley spreads far from the river banks to both the east and west barrier ranges as the river proceeds northward from its emergence from the Calapooya Mountains
Calapooya Mountains
The Calapooya Mountains are a mountain range in Lane and Douglas counties of southwestern Oregon in the United States. The range runs for approximately west from the Cascade Range between Eugene on the north and Roseburg on the south.- Geology :...
near Eugene
Eugene, Oregon
Eugene is the second largest city in the U.S. state of Oregon and the seat of Lane County. It is located at the south end of the Willamette Valley, at the confluence of the McKenzie and Willamette rivers, about east of the Oregon Coast.As of the 2010 U.S...
to the confluence of the Willamette with the Columbia River
Columbia River
The Columbia River is the largest river in the Pacific Northwest region of North America. The river rises in the Rocky Mountains of British Columbia, Canada, flows northwest and then south into the U.S. state of Washington, then turns west to form most of the border between Washington and the state...
at Portland
Portland, Oregon
Portland is a city located in the Pacific Northwest, near the confluence of the Willamette and Columbia rivers in the U.S. state of Oregon. As of the 2010 Census, it had a population of 583,776, making it the 29th most populous city in the United States...
. The valley's waterways and tributary streams and valleys
Tributary
A tributary or affluent is a stream or river that flows into a main stem river or a lake. A tributary does not flow directly into a sea or ocean...
were of great importance for water transport in the development of the Oregon Territory and young state until well past the arrival of modern roads and highways.

The valley holds several of the state's principal cities. A majority of the state's population lives within the basin, where one or more massive Ice Age
Ice age
An ice age or, more precisely, glacial age, is a generic geological period of long-term reduction in the temperature of the Earth's surface and atmosphere, resulting in the presence or expansion of continental ice sheets, polar ice sheets and alpine glaciers...
floods left the valley floor thick with flood-carried sediments, making the valley extremely fertile. A massively productive agricultural
Agriculture
Agriculture is the cultivation of animals, plants, fungi and other life forms for food, fiber, and other products used to sustain life. Agriculture was the key implement in the rise of sedentary human civilization, whereby farming of domesticated species created food surpluses that nurtured the...
area, the valley
Valley
In geology, a valley or dale is a depression with predominant extent in one direction. A very deep river valley may be called a canyon or gorge.The terms U-shaped and V-shaped are descriptive terms of geography to characterize the form of valleys...
was widely publicized from the 1820s as a 'promised land' of the 'flowing milk and honey' sort and became, at Oregon City
Oregon City, Oregon
Oregon City was the first city in the United States west of the Rocky Mountains to be incorporated. It is the county seat of Clackamas County, Oregon...
, the destination of choice for the oxen-drawn wagon train
Wagon train
A wagon train is a group of wagons traveling together. In the American West, individuals traveling across the plains in covered wagons banded together for mutual assistance, as is reflected in numerous films and television programs about the region, such as Audie Murphy's Tumbleweed and Ward Bond...
s of organized emigrants traveling west on the perilous and rough 1800–2100 miles
x