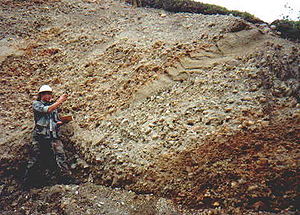 Alluvium is loose, unconsolidated (not cemented together into a solid rock
Rock (geology)
In geology, rock or stone is a naturally occurring solid aggregate of minerals and/or mineraloids.The Earth's outer solid layer, the lithosphere, is made of rock. In general rocks are of three types, namely, igneous, sedimentary, and metamorphic...
) soil
Soil
Soil is a natural body consisting of layers of mineral constituents of variable thicknesses, which differ from the parent materials in their morphological, physical, chemical, and mineralogical characteristics...
or sediment
Sediment
Sediment is naturally occurring material that is broken down by processes of weathering and erosion, and is subsequently transported by the action of fluids such as wind, water, or ice, and/or by the force of gravity acting on the particle itself....
s, eroded, deposited, and reshaped by water in some form in a non-marine
Marine (ocean)
Marine is an umbrella term. As an adjective it is usually applicable to things relating to the sea or ocean, such as marine biology, marine ecology and marine geology...
setting. Alluvium is typically made up of a variety of materials, including fine particles of silt
Silt
Silt is granular material of a size somewhere between sand and clay whose mineral origin is quartz and feldspar. Silt may occur as a soil or as suspended sediment in a surface water body...
and clay
Clay
Clay is a general term including many combinations of one or more clay minerals with traces of metal oxides and organic matter. Geologic clay deposits are mostly composed of phyllosilicate minerals containing variable amounts of water trapped in the mineral structure.- Formation :Clay minerals...
and larger particles of sand
Sand
Sand is a naturally occurring granular material composed of finely divided rock and mineral particles.The composition of sand is highly variable, depending on the local rock sources and conditions, but the most common constituent of sand in inland continental settings and non-tropical coastal...
and gravel
Gravel
Gravel is composed of unconsolidated rock fragments that have a general particle size range and include size classes from granule- to boulder-sized fragments. Gravel can be sub-categorized into granule and cobble...
. When this loose alluvial material is deposited or cemented into a lithological unit, or lithified, it would be called an alluvial deposit.

The term "alluvium" is not typically used in situations where the formation of the sediment can clearly be attributed to another geologic process that is well described. This includes (but is not limited to): lake sediments (lacustrine
Lake
A lake is a body of relatively still fresh or salt water of considerable size, localized in a basin, that is surrounded by land. Lakes are inland and not part of the ocean and therefore are distinct from lagoons, and are larger and deeper than ponds. Lakes can be contrasted with rivers or streams,...
), river sediments (fluvial
Fluvial
Fluvial is used in geography and Earth science to refer to the processes associated with rivers and streams and the deposits and landforms created by them...
), or glacially-derived sediments (glacial till). Sediments that are formed and/or deposited in a perennial stream or river are typically not referred to as alluvial.

Most, if not all, alluvium is very young (Quaternary
Quaternary
The Quaternary Period is the most recent of the three periods of the Cenozoic Era in the geologic time scale of the ICS. It follows the Neogene Period, spanning 2.588 ± 0.005 million years ago to the present...
in age), and is often referred to as "cover" because these sediments obscure the underlying bedrock. Most sedimentary material that fills a basin ("basin fill") that is not lithified is typically lumped together in the term alluvial.

Alluvium can contain valuable ores such as gold
Gold
Gold is a chemical element with the symbol Au and an atomic number of 79. Gold is a dense, soft, shiny, malleable and ductile metal. Pure gold has a bright yellow color and luster traditionally considered attractive, which it maintains without oxidizing in air or water. Chemically, gold is a...
and platinum
Platinum
Platinum is a chemical element with the chemical symbol Pt and an atomic number of 78. Its name is derived from the Spanish term platina del Pinto, which is literally translated into "little silver of the Pinto River." It is a dense, malleable, ductile, precious, gray-white transition metal...
and a wide variety of gemstone
Gemstone
A gemstone or gem is a piece of mineral, which, in cut and polished form, is used to make jewelry or other adornments...
s. Such concentrations of valuable ore
Ore
An ore is a type of rock that contains minerals with important elements including metals. The ores are extracted through mining; these are then refined to extract the valuable element....
s is termed a placer deposit
Placer deposit
In geology, a placer deposit or placer is an accumulation of valuable minerals formed by gravity separation during sedimentary processes. The name is from the Spanish word placer, meaning "alluvial sand". Placer mining is an important source of gold, and was the main technique used in the early...
.