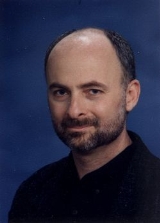 Overview
Glen David Brin, Ph.D. is an American
United States
The United States of America is a federal constitutional republic comprising fifty states and a federal district...
scientist and award-winning author of science fiction
Science fiction
Science fiction is a genre of fiction dealing with imaginary but more or less plausible content such as future settings, futuristic science and technology, space travel, aliens, and paranormal abilities...
. He has received the Hugo
Hugo Award
The Hugo Awards are given annually for the best science fiction or fantasy works and achievements of the previous year. The award is named after Hugo Gernsback, the founder of the pioneering science fiction magazine Amazing Stories, and was officially named the Science Fiction Achievement Awards...
, Locus
Locus Award
The Locus Award is a literary award established in 1971 and presented to winners of Locus magazine's annual readers' poll. Currently, the Locus Awards are presented at an annual banquet...
, Campbell
John W. Campbell Memorial Award for Best Science Fiction Novel
The John W. Campbell Memorial Award for Best Science Fiction Novel for best science fiction novel was created in 1973 by writers and critics Harry Harrison and Brian W. Aldiss to honor Campbell's name...
and Nebula Award
Nebula Award
The Nebula Award is given each year by the Science Fiction and Fantasy Writers of America , for the best science fiction/fantasy fiction published in the United States during the previous year...
s.
Brin was born in Glendale, California
Glendale, California
Glendale is a city in Los Angeles County, California, United States. As of the 2010 Census, the city population is 191,719, down from 194,973 at the 2000 census. making it the third largest city in Los Angeles County and the 22nd largest city in the state of California...
in 1950. In 1973, he graduated from the California Institute of Technology
California Institute of Technology
The California Institute of Technology is a private research university located in Pasadena, California, United States. Caltech has six academic divisions with strong emphases on science and engineering...
with a Bachelor of Science
Bachelor of Science
A Bachelor of Science is an undergraduate academic degree awarded for completed courses that generally last three to five years .-Australia:In Australia, the BSc is a 3 year degree, offered from 1st year on...
in astrophysics
Astrophysics
Astrophysics is the branch of astronomy that deals with the physics of the universe, including the physical properties of celestial objects, as well as their interactions and behavior...
. He followed this with a Master of Science
Master of Science
A Master of Science is a postgraduate academic master's degree awarded by universities in many countries. The degree is typically studied for in the sciences including the social sciences.-Brazil, Argentina and Uruguay:...
in applied physics
Applied physics
Applied physics is a general term for physics which is intended for a particular technological or practical use.It is usually considered as a bridge or a connection between "pure" physics and engineering....
in 1978 and a Doctor of Philosophy
Doctor of Philosophy
Doctor of Philosophy, abbreviated as Ph.D., PhD, D.Phil., or DPhil , in English-speaking countries, is a postgraduate academic degree awarded by universities...
in space science in 1981, both from the University of California, San Diego
University of California, San Diego
The University of California, San Diego, commonly known as UCSD or UC San Diego, is a public research university located in the La Jolla neighborhood of San Diego, California, United States...
.

His ancestors come from Poland, from the area around Konin
Konin
Konin is a city in central Poland.Konin may also refer to:*Emperor Kōnin , emperor of Japan who reigned 770–781**Kōnin , a Japanese era name for the years 810–824...
.

She had called in the debt that parents owe a child for bringing her, unasked, into a strange world. One should never make an offer without knowing full well what will happen if it is accepted.

I like to be surprised. Fresh implications and plot twists erupt as a story unfolds. Characters develop backgrounds, adding depth and feeling. Writing feels like exploring.

Change is the principal feature of our age and literature should explore how people deal with it. The best science fiction does that, head-on.