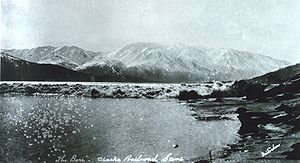 A tidal bore is a tidal
Tide
Tides are the rise and fall of sea levels caused by the combined effects of the gravitational forces exerted by the moon and the sun and the rotation of the Earth....
phenomenon in which the leading edge of the incoming tide forms a wave (or waves) of water that travel up a river or narrow bay against the direction of the river or bay's current. As such, it is a true tidal wave and not to be confused with a tsunami
Tsunami
A tsunami is a series of water waves caused by the displacement of a large volume of a body of water, typically an ocean or a large lake...
, which is a large ocean wave traveling primarily on the open ocean.

Bores occur in relatively few locations worldwide, usually in areas with a large tidal range (typically more than 6 metres (19.7 ft) between high and low water) and where incoming tides are funneled into a shallow, narrowing river or lake via a broad bay. The funnel-like shape not only increases the tidal range, but it can also decrease the duration of the flood tide, down to a point where the flood appears as a sudden increase in the water level. Note the tidal bore takes place during the flood tide and never during the ebb tide
Ebb Tide
"Ebb Tide" is a popular song, written in 1953 by the lyricist Carl Sigman and composer Robert Maxwell.-Recordings:* The best-known versions are by Frank Chacksfield & His Orchestra , Vic Damone , Roy Hamilton , Frank Sinatra , The Platters , Lenny Welch and the Righteous Brothers...
.

A tidal bore may take on various forms, ranging from a single breaking wavefront with a roller — somewhat like a hydraulic jump
Hydraulic jump
A hydraulic jump is a phenomenon in the science of hydraulics which is frequently observed in open channel flow such as rivers and spillways. When liquid at high velocity discharges into a zone of lower velocity, a rather abrupt rise occurs in the liquid surface...
— to "undular bores", comprising a smooth wavefront followed by a train of secondary waves
WAVES
The WAVES were a World War II-era division of the U.S. Navy that consisted entirely of women. The name of this group is an acronym for "Women Accepted for Volunteer Emergency Service" ; the word "emergency" implied that the acceptance of women was due to the unusual circumstances of the war and...
("whelps"). Large bores can be particularly unsafe for shipping but also present opportunities for river surfing
River surfing
River surfing is the sport of surfing either standing waves or tidal bores in rivers. Claims for its origins include a 1955 ride of 1.5 miles along the tidal bore of the River Severn...
.

Two key features of a tidal bore are the intense turbulence and turbulent mixing generated during the bore propagation, as well as its rumbling noise. The visual observations of tidal bores highlight the turbulent nature of the surging waters. The tidal bore induces a strong turbulent mixing in the estuarine zone, and the effects may be felt along considerable distances. The velocity observations indicate a rapid deceleration of the flow associated with the passage of the bore as well as large velocity fluctuations. A tidal bore creates a powerful roar that combines the sounds caused by the turbulence in the bore front and whelps, entrained air bubbles in the bore roller, sediment erosion beneath the bore front and of the banks, scouring of shoals and bars, and impacts on obstacles. The bore rumble is heard far away because its low frequencies can travel over long distances. The low-frequency sound is a characteristic feature of the advancing roller in which the air bubbles entrapped in the large-scale eddies are acoustically active and play the dominant role in the rumble-sound generation.

The word bore derives through Old English
Old English language
Old English or Anglo-Saxon is an early form of the English language that was spoken and written by the Anglo-Saxons and their descendants in parts of what are now England and southeastern Scotland between at least the mid-5th century and the mid-12th century...
from the Old Norse word bára, meaning "wave" or "swell". 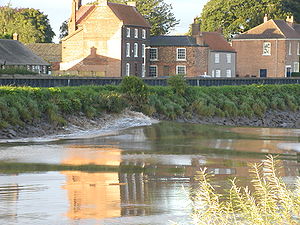 The phenomenon is generally named un mascaret in French. but some other local names are preferred.

Most rivers draining into the upper Bay of Fundy
Bay of Fundy
The Bay of Fundy is a bay on the Atlantic coast of North America, on the northeast end of the Gulf of Maine between the Canadian provinces of New Brunswick and Nova Scotia, with a small portion touching the U.S. state of Maine...
between Nova Scotia
Nova Scotia
Nova Scotia is one of Canada's three Maritime provinces and is the most populous province in Atlantic Canada. The name of the province is Latin for "New Scotland," but "Nova Scotia" is the recognized, English-language name of the province. The provincial capital is Halifax. Nova Scotia is the...
and New Brunswick
New Brunswick
New Brunswick is one of Canada's three Maritime provinces and is the only province in the federation that is constitutionally bilingual . The provincial capital is Fredericton and Saint John is the most populous city. Greater Moncton is the largest Census Metropolitan Area...
have tidal bores. Notable ones include:

Lakes with an ocean inlet
Inlet
An inlet is a narrow body of water between islands or leading inland from a larger body of water, often leading to an enclosed body of water, such as a sound, bay, lagoon or marsh. In sea coasts an inlet usually refers to the actual connection between a bay and the ocean and is often called an...
can also exhibit tidal bores.

The tidal bores may be dangerous and some bores have had a sinister reputation. For example, the tidal bores of the Seine River (France), of the Petitcodiac River (Canada) and of the Colorado River (Mexico). In China, despite warning signs erected along the Qiantang River banks, a number of tragic accidents happen each year. The tidal bores affect the shipping and navigation in the estuarine zone, for example in Papua New Guinea
Papua New Guinea
Papua New Guinea , officially the Independent State of Papua New Guinea, is a country in Oceania, occupying the eastern half of the island of New Guinea and numerous offshore islands...
(Fly and Bamu Rivers), Malaysia (Benak at Batang Lupar), and India
India
India , officially the Republic of India , is a country in South Asia. It is the seventh-largest country by geographical area, the second-most populous country with over 1.2 billion people, and the most populous democracy in the world...
(Hoogly bore).

On the other hand, the tidal-bore affected estuaries are the rich feeding zones and breeding grounds of several forms of wildlife. The estuarine zones are the spawning and breeding grounds of several native fish species, while the aeration induced by the tidal bore contribute to the abundant growth of many species of fish and shrimps (for example in the Rokan River).

Scientific measurements in tidal bores are challenging because of the force of the tidal bore flow. This is evidenced by a number of field work incidents in the Dee River, Rio Mearim, Daly River and Sélune River: "during this […] deployment, the [ADCP] instrument was repeatedly buried in sediment after the 1st tidal cycle and had to be dug out of the sediment, with considerable difficulty, at the time of recovery" (Dee River); "About 20 min after the passage of the bore the two aluminium frames at site C were toppled. […] A 3-min-duration patch of macroturbulence was observed. […] This unsteady motion was sufficiently energetic to topple moorings that had survived much higher, quasi-steady currents of 1.8 m/s" (Daly River); "the field study experienced a number of problems and failures. About 40 s after the passage of the bore, the metallic frame started to move. The ADV support failed completely 10 minutes after the tidal bore." (Sélune River).