Encyclopedia
Silt is granular material
Granular material
A granular material is a conglomeration of discrete solid, macroscopic particles characterized by a loss of energy whenever the particles interact . The constituents that compose granular material must be large enough such that they are not subject to thermal motion fluctuations...
of a size somewhere between sand
Sand
Sand is a naturally occurring granular material composed of finely divided rock and mineral particles.The composition of sand is highly variable, depending on the local rock sources and conditions, but the most common constituent of sand in inland continental settings and non-tropical coastal...
and clay
Clay
Clay is a general term including many combinations of one or more clay minerals with traces of metal oxides and organic matter. Geologic clay deposits are mostly composed of phyllosilicate minerals containing variable amounts of water trapped in the mineral structure.- Formation :Clay minerals...
whose mineral origin is quartz and feldspar. Silt may occur as a soil
Soil
Soil is a natural body consisting of layers of mineral constituents of variable thicknesses, which differ from the parent materials in their morphological, physical, chemical, and mineralogical characteristics...
or as suspended sediment
Sediment
Sediment is naturally occurring material that is broken down by processes of weathering and erosion, and is subsequently transported by the action of fluids such as wind, water, or ice, and/or by the force of gravity acting on the particle itself....
(also known as suspended load) in a surface water body. It may also exist as soil deposited at the bottom of a water body.

Silt is created by a variety of physical processes capable of splitting the generally sand-sized quartz crystals of primary rocks by exploiting deficiencies in their lattice
Crystal structure
In mineralogy and crystallography, crystal structure is a unique arrangement of atoms or molecules in a crystalline liquid or solid. A crystal structure is composed of a pattern, a set of atoms arranged in a particular way, and a lattice exhibiting long-range order and symmetry...
. These involve chemical weathering
Weathering
Weathering is the breaking down of rocks, soils and minerals as well as artificial materials through contact with the Earth's atmosphere, biota and waters...
of rock and regolith
Regolith
Regolith is a layer of loose, heterogeneous material covering solid rock. It includes dust, soil, broken rock, and other related materials and is present on Earth, the Moon, some asteroids, and other terrestrial planets and moons.-Etymology:...
, and a number of physical weathering processes such as frost shattering  and haloclasty
Haloclasty
Haloclasty is a type of physical weathering caused by the growth of salt crystals. The process is first started when saline water seeps into cracks and evaporates depositing salt crystals, when the rocks are then heated up the crystals will expand putting pressure on the surrounding rock which will...
. The main process is abrasion
Abrasion (geology)
Abrasion is the mechanical scraping of a rock surface by friction between rocks and moving particles during their transport by wind, glacier, waves, gravity, running water or erosion. After friction, the moving particles dislodge loose and weak debris from the side of the rock...
through transport, including fluvial
Fluvial
Fluvial is used in geography and Earth science to refer to the processes associated with rivers and streams and the deposits and landforms created by them...
comminution
Comminution
Comminution is the process in which solid materials are reduced in size, by crushing, grinding and other processes. It occurs naturally during faulting in the upper part of the crust and is an important operation in mineral processing, ceramics, electronics and other fields. Within industrial uses,...
, aeolian attrition
Attrition (weathering)
Attrition is a form of coastal or river erosion, when the bed load is eroded by itself and the bed. As rocks are transported downstream along a riverbed, the regular impacts between the grains themselves and between the grains and the bed cause them to be broken up into smaller fragments. This...
and glacial grinding. It is in semi-arid environments that substantial quantities of silt are produced. Silt is sometimes known as 'rock flour' or 'stone dust', especially when produced by glacial action. Mineralogically, silt is composed mainly of quartz
Quartz
Quartz is the second-most-abundant mineral in the Earth's continental crust, after feldspar. It is made up of a continuous framework of SiO4 silicon–oxygen tetrahedra, with each oxygen being shared between two tetrahedra, giving an overall formula SiO2. There are many different varieties of quartz,...
and feldspar
Feldspar
Feldspars are a group of rock-forming tectosilicate minerals which make up as much as 60% of the Earth's crust....
. Sedimentary rock
Sedimentary rock
Sedimentary rock are types of rock that are formed by the deposition of material at the Earth's surface and within bodies of water. Sedimentation is the collective name for processes that cause mineral and/or organic particles to settle and accumulate or minerals to precipitate from a solution....
composed mainly of silt is known as siltstone
Siltstone
Siltstone is a sedimentary rock which has a grain size in the silt range, finer than sandstone and coarser than claystones.- Description :As its name implies, it is primarily composed of silt sized particles, defined as grains 1/16 - 1/256 mm or 4 to 8 on the Krumbein phi scale...
. 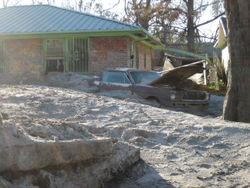 Silt is easily transported in water
Water
Water is a chemical substance with the chemical formula H2O. A water molecule contains one oxygen and two hydrogen atoms connected by covalent bonds. Water is a liquid at ambient conditions, but it often co-exists on Earth with its solid state, ice, and gaseous state . Water also exists in a...
or other liquid and is fine enough to be carried long distances by air in the form of dust
Dust
Dust consists of particles in the atmosphere that arise from various sources such as soil dust lifted up by wind , volcanic eruptions, and pollution...
. Thick deposits of silty material resulting from aeolian deposition are often called loess
Loess
Loess is an aeolian sediment formed by the accumulation of wind-blown silt, typically in the 20–50 micrometre size range, twenty percent or less clay and the balance equal parts sand and silt that are loosely cemented by calcium carbonate...
(a German term) or limon (French). Silt and clay contribute to turbidity
Turbidity
Turbidity is the cloudiness or haziness of a fluid caused by individual particles that are generally invisible to the naked eye, similar to smoke in air. The measurement of turbidity is a key test of water quality....
in water. Silt is transported by stream
Stream
A stream is a body of water with a current, confined within a bed and stream banks. Depending on its locale or certain characteristics, a stream may be referred to as a branch, brook, beck, burn, creek, "crick", gill , kill, lick, rill, river, syke, bayou, rivulet, streamage, wash, run or...
s or by water currents in the ocean
Ocean
An ocean is a major body of saline water, and a principal component of the hydrosphere. Approximately 71% of the Earth's surface is covered by ocean, a continuous body of water that is customarily divided into several principal oceans and smaller seas.More than half of this area is over 3,000...
. When silt appears as a pollutant in water the phenomenon is known as siltation
Siltation
Siltation is the pollution of water by fine particulate terrestrial clastic material, with a particle size dominated by silt or clay. It refers both to the increased concentration of suspended sediments, and to the increased accumulation of fine sediments on bottoms where they are undesirable...
.

In south east Bangladesh, in the Noakhali district
Noakhali District
Noakhali is a district in South-eastern Bangladesh. It is located in the Chittagong Division.-Geography:Noakhali District located in Chittagong Division, Bangladesh...
, cross dams were built in the 1960s whereby silt gradually started forming new land called "chars." The district of Noakhali has actually gained more than 28 square miles (73 km²) of land in the past 50 years.

With Dutch funding, the Bangladeshi government began to help develop older chars in the late 1970s, and the effort has since become a multiagency operation building roads, culverts, embankments, cyclone shelters, toilets and ponds, as well as distributing land to settlers. By fall 2010, the program will have allotted some 27000 acres (109.3 km²) to 21,000 families.

A main source of silt in urban rivers is disturbance of soil by construction
Construction
In the fields of architecture and civil engineering, construction is a process that consists of the building or assembling of infrastructure. Far from being a single activity, large scale construction is a feat of human multitasking...
activity. A main source in rural rivers is erosion
Erosion
Erosion is when materials are removed from the surface and changed into something else. It only works by hydraulic actions and transport of solids in the natural environment, and leads to the deposition of these materials elsewhere...
from plowing of farm fields, clearcut logging or slash and burn
Slash and burn
Slash-and-burn is an agricultural technique which involves cutting and burning of forests or woodlands to create fields. It is subsistence agriculture that typically uses little technology or other tools. It is typically part of shifting cultivation agriculture, and of transhumance livestock...
treatment of forest
Forest
A forest, also referred to as a wood or the woods, is an area with a high density of trees. As with cities, depending where you are in the world, what is considered a forest may vary significantly in size and have various classification according to how and what of the forest is composed...
s. When the total ground surface is stripped of vegetation, the upper soil is vulnerable to wind and water erosion. Entire regions of countries have been rendered unproductive by erosion. On the Madagascar
Madagascar
The Republic of Madagascar is an island country located in the Indian Ocean off the southeastern coast of Africa...
high central plateau
Plateau
In geology and earth science, a plateau , also called a high plain or tableland, is an area of highland, usually consisting of relatively flat terrain. A highly eroded plateau is called a dissected plateau...
, approximately 10% of the country's land area, virtually the entire landscape, is sterile, with gully
Gully
A gully is a landform created by running water, eroding sharply into soil, typically on a hillside. Gullies resemble large ditches or small valleys, but are metres to tens of metres in depth and width...
erosive furrows deeper than 50 metres and one kilometre wide.
Shifting cultivation
Shifting cultivation
Shifting cultivation is an agricultural system in which plots of land are cultivated temporarily, then abandoned. This system often involves clearing of a piece of land followed by several years of wood harvesting or farming, until the soil loses fertility...
is a farming system which incorporates the slash-and-burn method in some regions of the world. The resulting sediment load can cause extensive fish kill
Fish kill
The term fish kill, known also as fish die-off and as fish mortality, is a localized die-off of fish populations which may also be associated with more generalised mortality of aquatic life...
s.