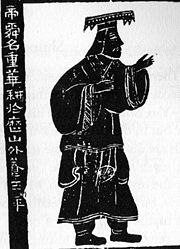 Chinese monarchs
Chinese sovereign
Chinese sovereign is the ruler of a particular period in ancient China. Several titles and naming schemes have been used throughout history.-Emperor Title:...
were known by many different names, and how they should be identified is often confusing. Sometimes the same emperor is commonly known by two or three separate names
Chinese name
Personal names in Chinese culture follow a number of conventions different from those of personal names in Western cultures. Most noticeably, a Chinese name is written with the family name first and the given name next, therefore "John-Paul Smith" as a Chinese name would be "Smith John-Paul"...
, or the same name is used by emperors of different dynasties. The tables below do not necessarily include all of an emperor's names – for example, posthumous names could run to more than twenty characters and were rarely used in historical writing – but, where possible, the most commonly used name or naming convention
Naming convention
A naming convention is a convention for naming things. The intent is to allow useful information to be deduced from the names based on regularities. For instance, in Manhattan, streets are numbered, with East-West streets being called "Streets" and North-South streets called "Avenues".-Use...
has been indicated.

These tables may not necessarily represent the most recently updated information on Chinese monarchs; please check the page for the relevant dynasty for possible additional information.

Follow these links to see how they are related:

Although it is ingrained in Chinese mythology that the earliest mythological rulers of China included three huáng (皇, generally translated "Sovereign" or "August one", denoting demi-god status) and five dì (帝, generally translated "Emperor", but denoting much more reverential status than the modern term "Emperor"), their identities have differed between different sources, with some individuals such as the Yellow Emperor
Yellow Emperor
The Yellow Emperor or Huangdi1 is a legendary Chinese sovereign and culture hero, included among the Three Sovereigns and Five Emperors. Tradition holds that he reigned from 2697–2597 or 2696–2598 BC...
being regarded as either Sovereign or Emperor, depending on the source. The two characters would later be taken together by Qin Shi Huang
Qin Shi Huang
Qin Shi Huang , personal name Ying Zheng , was king of the Chinese State of Qin from 246 BC to 221 BC during the Warring States Period. He became the first emperor of a unified China in 221 BC...
to form the new title huángdì (皇帝, Emperoror), thus claiming legendary status for himself.

Mid 11th century BC – 256 BC, traditionally divided into:

The Southern Ming Dynasty
Southern Ming Dynasty
The Southern Ming Dynasty was the Ming loyalist regime that continued in Southern China from 1644 to 1662 following the capture of Beijing by rebel armies and the death of the last Ming emperor in 1644....
refers to the Ming loyalist regimes that existed in Southern China from 1644 to 1662. The regime was established by the princes of the already destroyed Ming dynasty. All of these monarchs had their regimes crushed by the Qing forces very quickly. Koxinga
Koxinga
Koxinga is the customary Western spelling of the popular appellation of Zheng Chenggong , a military leader who was born in 1624 in Hirado, Japan to Zheng Zhilong, a Chinese merchant/pirate, and his Japanese wife and died in 1662 on the island of Formosa .A Ming loyalist and the arch commander of...
(Zheng Chenggong) used the Ming dynasty's name and gathered forces before fleeing to Taiwan. * The two characters are homonyms, both pronounced Lu; to distinguish them, one is usually kept as Lu and the other spelled differently. Luh is from Cambridge History of China; Lou is from A.C. Moule's Rulers of China (1957). When one irregular spelling is used, the other is kept as regular (Lu). The two systems are distinct and not used simultaneously.

Yuan Shikai
Yuan Shikai
Yuan Shikai was an important Chinese general and politician famous for his influence during the late Qing Dynasty, his role in the events leading up to the abdication of the last Qing Emperor of China, his autocratic rule as the second President of the Republic of China , and his short-lived...
attempted to establish himself as emperor in 1916, but his rule is universally accepted as inauthentic. After 83 days, the reign collapsed.