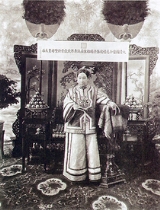 Overview
Empress Dowager Cixi1 [t͡sʰɨɕi] (29 November 1835 – 15 November 1908), of the Manchu Yehenara
Nara (clan)
Nara is a major Manchu clan. The Hūlun Four States -- Hada , Ula , Hoifa and Yehe -- were ruled by this clan...
clan, was a powerful and charismatic figure who became the de facto
De facto
De facto is a Latin expression that means "concerning fact." In law, it often means "in practice but not necessarily ordained by law" or "in practice or actuality, but not officially established." It is commonly used in contrast to de jure when referring to matters of law, governance, or...
ruler of the Manchu Qing Dynasty
Qing Dynasty
The Qing Dynasty was the last dynasty of China, ruling from 1644 to 1912 with a brief, abortive restoration in 1917. It was preceded by the Ming Dynasty and followed by the Republic of China....
in China for 47 years from 1861 to her death in 1908.

Selected by the Xianfeng Emperor
Xianfeng Emperor
The Xianfeng Emperor , born Aisin-Gioro I Ju, was the ninth Emperor of the Qing Dynasty, and the seventh Qing emperor to rule over China, from 1850 to 1861.-Family and his early years:...
as an imperial concubine in her adolescence, she climbed the ranks of Xianfeng's harem and gave birth to a son who became the Tongzhi Emperor
Tongzhi Emperor
The Tongzhi Emperor , born Aisin-Gioro Dzai Šun, was the tenth emperor of the Manchu-led Qing Dynasty, and the eighth Qing emperor to rule over China, from 1861 to 1875. His reign, which effectively lasted through his adolescence, was largely overshadowed by the rule of his mother, the Empress...
upon Xianfeng's death.

What was her religion or what did she believe in?
More
x