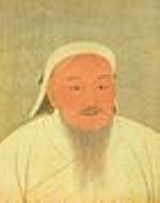 Overview
Genghis Khan (ˈ or ˈ, tʃiŋɡɪs xaːŋ; 1162?August 1227), born Temujin and occasionally known by his temple name
Temple name
Temple names are commonly used when naming most Chinese, Korean , and Vietnamese royalty. They should not be confused with era names. Compared to posthumous names, the use of temple names is more exclusive...
Taizu (太祖), was the founder and Great Khan
Khagan
Khagan or qagan , alternatively spelled kagan, khaghan, qaghan, or chagan, is a title of imperial rank in the Mongolian and Turkic languages equal to the status of emperor and someone who rules a khaganate...
(emperor) of the Mongol Empire
Mongol Empire
The Mongol Empire , initially named as Greater Mongol State was a great empire during the 13th and 14th centuries...
, which became the largest contiguous empire in history after his death.

Be of one mind and one faith, that you may conquer your enemies and lead long and happy lives.

Conquering the world on horseback is easy; it is dismounting and governing that is hard.

As quoted in The Gigantic Book of Horse Wisdom (2007) by Thomas Meagher and Buck Brannaman, p. 408

In the space of seven years I have succeeded in accomplishing a great work and uniting the whole world in one Empire.