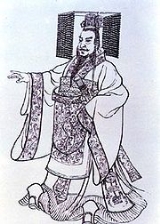 Overview
Qin Shi Huang (259 BC – 210 BC), personal name Ying Zheng (嬴政), was king of the Chinese State of Qin
Qin (state)
The State of Qin was a Chinese feudal state that existed during the Spring and Autumn and Warring States Periods of Chinese history...
from 246 BC to 221 BC during the Warring States Period
Warring States Period
The Warring States Period , also known as the Era of Warring States, or the Warring Kingdoms period, covers the Iron Age period from about 475 BC to the reunification of China under the Qin Dynasty in 221 BC...
. He became the first emperor
Emperor of China
The Emperor of China refers to any sovereign of Imperial China reigning between the founding of Qin Dynasty of China, united by the King of Qin in 221 BCE, and the fall of Yuan Shikai's Empire of China in 1916. When referred to as the Son of Heaven , a title that predates the Qin unification, the...
of a unified China in 221 BC. He ruled until his death in 210 BC at the age of 49.

To have a great peace, the state must be united. The King do what it must to fulfill his responsible as a king.

I have collected all the writings of the Empire and burnt those which were of no use.