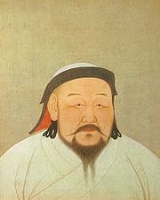 Overview
Kublai Khan born Kublai and also known by the temple name Shizu , was the fifth Great Khan of the Mongol Empire
Mongol Empire
The Mongol Empire , initially named as Greater Mongol State was a great empire during the 13th and 14th centuries...
from 1260 to 1294 and the founder of the Yuan Dynasty
Yuan Dynasty
The Yuan Dynasty , or Great Yuan Empire was a ruling dynasty founded by the Mongol leader Kublai Khan, who ruled most of present-day China, all of modern Mongolia and its surrounding areas, lasting officially from 1271 to 1368. It is considered both as a division of the Mongol Empire and as an...
in China
China
Chinese civilization may refer to:* China for more general discussion of the country.* Chinese culture* Greater China, the transnational community of ethnic Chinese.* History of China* Sinosphere, the area historically affected by Chinese culture...
. As the second son of Tolui
Tolui
Tolui, was the youngest son of Genghis Khan by his chief khatun Börte...
and Sorghaghtani Beki
Sorghaghtani Beki
Sorghaghtani Beki or Bekhi , also written Sorkaktani, Sorkhokhtani, Sorkhogtani, Siyurkuktiti; , a Kereyid princess of the Nestorian Christian faith and daughter-in-law of Temüjin , was one of the most powerful and competent women in the Mongol Empire...
and a grandson of Genghis Khan
Genghis Khan
Genghis Khan , born Temujin and occasionally known by his temple name Taizu , was the founder and Great Khan of the Mongol Empire, which became the largest contiguous empire in history after his death....
, he claimed the title of Khagan
Khagan
Khagan or qagan , alternatively spelled kagan, khaghan, qaghan, or chagan, is a title of imperial rank in the Mongolian and Turkic languages equal to the status of emperor and someone who rules a khaganate...
of the Ikh Mongol Uls (Mongol Empire) in 1260 after the death of his older brother Möngke
Möngke Khan
Möngke Khan , born Möngke, , was the fourth Great Khan of the Mongol Empire from July 1, 1251 – August 11, 1259. He was the first Great Khan from the Toluid line, and made significant reforms to improve the administration of the Empire during his reign...
in the previous year, though his younger brother Ariq Böke
Ariq Boke
Ariq Böke , the components of his name also spelled Arigh, Arik, Bukha, Buka , was the youngest son of Tolui , a son of Genghis Khan. After the death of his brother the Great Khan Mongke, Ariq Boke briefly took power while his brothers Kublai and Hulagu were absent...
was also given this title in the Mongolian capital at Karakorum
Karakorum
Karakorum was the capital of the Mongol Empire in the 13th century, and of the Northern Yuan in the 14-15th century. Its ruins lie in the northwestern corner of the Övörkhangai Province of Mongolia, near today's town of Kharkhorin, and adjacent to the Erdene Zuu monastery...
.

What were some of Kublai Khan's most important early influences?

1271    Kublai Khan renames his empire "Yuan" (元 yuán), officially marking the start of the Yuan Dynasty of Mongolia and China.

1281    The Mongolian fleet of Kublai Khan is destroyed by a typhoon while approaching Japan.

1287    Kublai Khan defeated the force of Nayan and other traditionalist Borjigin princes in East Mongolia and Manchuria.