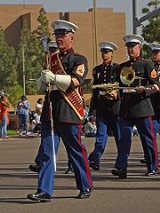 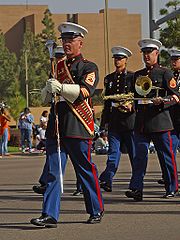 A parade is a procession of people, usually organized along a street, often in costume
Costume
The term costume can refer to wardrobe and dress in general, or to the distinctive style of dress of a particular people, class, or period. Costume may also refer to the artistic arrangement of accessories in a picture, statue, poem, or play, appropriate to the time, place, or other circumstances...
, and often accompanied by marching bands, floats
Float (parade)
A float is a decorated platform, either built on a vehicle or towed behind one, which is a component of many festive parades, such as those of Mardi Gras in New Orleans, the Carnival of Viareggio, the Maltese Carnival, the Macy's Thanksgiving Day Parade, the Key West Fantasy Fest parade, the...
or sometimes large balloons. Parades are held for a wide range of reasons, but are usually celebrations of some kind. In Britain
United Kingdom
The United Kingdom of Great Britain and Northern IrelandIn the United Kingdom and Dependencies, other languages have been officially recognised as legitimate autochthonous languages under the European Charter for Regional or Minority Languages...
the term parade is usually reserved for either military parades or other occasions where participants march
Marching
See also: Loaded marchMarching refers to the organized, uniformed, steady and rhythmic walking forward, usually associated with military troops.Marching is often performed to march music, and often associated with military parades....
in formation; for celebratory occasions the word procession
Procession
A procession is an organized body of people advancing in a formal or ceremonial manner.-Procession elements:...
is more usual. In the Canadian Forces
Canadian Forces
The Canadian Forces , officially the Canadian Armed Forces , are the unified armed forces of Canada, as constituted by the National Defence Act, which states: "The Canadian Forces are the armed forces of Her Majesty raised by Canada and consist of one Service called the Canadian Armed Forces."...
the term also has several less formal connotations.

Protest
Protest
A protest is an expression of objection, by words or by actions, to particular events, policies or situations. Protests can take many different forms, from individual statements to mass demonstrations...
demonstrations
Demonstration (people)
A demonstration or street protest is action by a mass group or collection of groups of people in favor of a political or other cause; it normally consists of walking in a mass march formation and either beginning with or meeting at a designated endpoint, or rally, to hear speakers.Actions such as...
can also take the form of a parade, but in such cases are usually referred to as a march instead.

The parade float got its name because the first floats were decorated barge
Barge
A barge is a flat-bottomed boat, built mainly for river and canal transport of heavy goods. Some barges are not self-propelled and need to be towed by tugboats or pushed by towboats...
s that were towed along canals with ropes held by parade marchers on the shore. Floats were occasionally propelled from within by concealed oar
Oar
An oar is an implement used for water-borne propulsion. Oars have a flat blade at one end. Oarsmen grasp the oar at the other end. The difference between oars and paddles are that paddles are held by the paddler, and are not connected with the vessel. Oars generally are connected to the vessel by...
smen, but the practice was abandoned because of the high incidence of drowning
Drowning
Drowning is death from asphyxia due to suffocation caused by water entering the lungs and preventing the absorption of oxygen leading to cerebral hypoxia....
when the lightweight and unstable frames capsized. Strikingly, among the first uses of grounded floats — towed by horses
Horse-drawn vehicle
A horse-drawn vehicle is a mechanized piece of equipment pulled by one horse or by a team of horses. These vehicles typically had two or four wheels and were used to carry passengers and/or a load...
— was a ceremony in memory of recently drowned parade oarsmen. Today, parade floats are traditionally pulled by motor vehicles or powered themselves.

Since the advent of technology, it is possible for aircraft and boats to parade. A flypast
Flypast
Flypast is a term used in the United Kingdom, the Commonwealth, and other countries to denote ceremonial or honorific flights by groups of aircraft and, rarely, by a single aircraft...
is an aerial parade of anything from one to dozens of aircraft, both in commercial context at airshows and also to mark, e.g., national days or significant anniversaries. They are particularly common in the United Kingdom
United Kingdom
The United Kingdom of Great Britain and Northern IrelandIn the United Kingdom and Dependencies, other languages have been officially recognised as legitimate autochthonous languages under the European Charter for Regional or Minority Languages...
, where they are often associated with Royal occasions. Similarly, for ships, there may be a sail-past of, e.g., tall ship
Tall ship
A tall ship is a large, traditionally-rigged sailing vessel. Popular modern tall ship rigs include topsail schooners, brigantines, brigs and barques. "Tall Ship" can also be defined more specifically by an organization, such as for a race or festival....
s (as was seen during Trafalgar 200
Trafalgar 200
Trafalgar 200 was a series of events in 2005 held mostly in the United Kingdom to celebrate the 200th anniversary of the Battle of Trafalgar, where a British fleet led by Admiral Nelson defeated a joint Franco-Spanish fleet during the Napoleonic Wars. During the summer of 2005 there was an...
) or other sailing vessels as during the celebrations of the 60th anniversary of World War II
World War II
World War II, or the Second World War , was a global conflict lasting from 1939 to 1945, involving most of the world's nations—including all of the great powers—eventually forming two opposing military alliances: the Allies and the Axis...
.

The longest parade in the world is the Marksmen's Parade that takes place in Hanover
Hanover
Hanover or Hannover, on the river Leine, is the capital of the federal state of Lower Saxony , Germany and was once by personal union the family seat of the Hanoverian Kings of Great Britain, under their title as the dukes of Brunswick-Lüneburg...
every year during the Schützenfest
Schützenfest
A Schützenfest is a traditional festival or fair featuring a target shooting competition in the cultures of both Germany and Switzerland....
. The parade is 12 kilometres long with more than 12,000 participants from all over the world, among them more than 100 bands and around 70 floats and carriages.