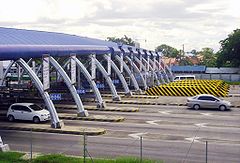 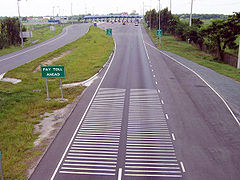 Originally controlled by the Philippine National Construction Corporation
Philippine National Construction Corporation
The Philippine National Construction Corporation or PNCC is a majority government-owned and/or controlled corporation in the Philippines. It is the largest construction company in the Philippines and in Southeast Asia....
or PNCC, operation and maintenance of the NLEx was transferred in 2005 to the Manila North Tollways Corporation, a subsidiary of Metro Pacific Investments Corporation (formerly, it was the subsidiary of the Lopez Group of Companies). A major upgrade and rehabilitation has been completed in February 2005 and the road has now similar qualities as a modern French tollway. The main contractor of the rehabilitation work was Leighton Contractors Pty. Ltd (Australia) with Egis Projects, a company belonging to the French Groupe Egis as the main subcontractor for the toll, telecommunication and traffic management systems. To help maintain the safety and quality of the expressway, various rules are in effect, such as restricting the left lane to passing vehicles only and banning overloaded trucks.

The NLEx Segment 8.1 or the NLEX Mindanao Avenue Link is a four lane, 2.7 kilometer expressway that runs from Mindanao Avenue to the NLEx cloverleaf in Valenzuela City. This is an alternate route to NLEx from Manila. Open to traffic on July 10, 2010. This segment is a part of C-5
Circumferential Road 5
Circumferential Road 5, also known as C-5 is a beltway which stretches from Parañaque City to Valenzuela City in Metro Manila, the Philippines...
Road North Extension.
b

The NLEx Segment 8.2 Will connect NLEx segment 8.1 to the Katipunan Ave. This toll road is still on the feasibility study.

This Segment will connect NLEx segment 9 and Skyway
Metro Manila Skyway
The Metro Manila Skyway is an elevated highway crossing over much of the existing South Luzon Expressway as of the moment. It is located within the Metro Manila portion of the SLEX and crosses through Makati City, Pasay City, Parañaque City, and Muntinlupa City. The Skyway begins in Barangay San...
Stage 3 to the Manila North Harbor.

Known as the Connector Road project, the elevated expressway will have a distance of 13.24 kilometers with 10.54 kilometers right over the Philippine National Railways tracks and the remaining 2.7 kilometers over Osmeña Highway.

It will be connected in the north to Segment 10, which will soon be constructed through the cities of Caloocan and Valenzuela. In the south, it will be linked to the skyway near Sen. Gil Puyat Avenue (Buendia) in Makati City. Once completed, the Connector Road will have four entry and exit points: C-3 Road in Caloocan, España and Quirino Avenue in Manila, and Buendia in Makati.

Construction of the project is estimated to cost P17 billion, but as an "all-elevated" structure, right-of-way acquisition shall be reduced to an estimated cost of only P2.41-billion. Construction is anticipated to start in 2012 when NLEX Segments 9 and 10 are complete.

The tollway has two sections: an open section and a closed section. The open section (within Metro Manila
Metro Manila
Metropolitan Manila , the National Capital Region , or simply Metro Manila, is the metropolitan region encompassing the City of Manila and its surrounding areas in the Philippines...
) charges a flat toll based on vehicle class and is employed to reduce the number of toll barriers (and associated bottlenecks) within the metropolis. The closed section is distance-based, charging based on the class of vehicle and distance traveled. Class 1 vehicles can use an electronic toll collection
Electronic toll collection
Electronic toll collection , an adaptation of military "identification friend or foe" technology, aims to eliminate the delay on toll roads by collecting tolls electronically. It is thus a technological implementation of a road pricing concept...
system (called EC Tag) to reduce wait times and congestion at toll barriers. A prepaid magnetic card (the NLE Badge) is provided as an alternative payment for class 2 and 3 vehicles. Both systems connect to accounts that can be replenished in various ways. As of October 1, 2011, all tolls (as shown below) include the 12% Value-Added Tax (VAT).

80 km/h in Balintawak - Tabang segment and 90 km/h in Tabang Spur and 100 km/h in Tabang - Dau segment. Speed limits are strictly enforced via CCTV
Closed-circuit television
Closed-circuit television is the use of video cameras to transmit a signal to a specific place, on a limited set of monitors....
cameras and speed guns
Radar gun
A radar speed gun is a small doppler radar unit used to measure the speed of moving objects, including vehicles, pitched baseballs, runners and other moving objects. Radar speed guns may be hand-held, vehicle-mounted or static...
, and speeders are usually identified as soon as they hit the tollbooth.

The entire stretch of the expressway
Controlled-access highway
A controlled-access highway is a highway designed exclusively for high-speed vehicular traffic, with all traffic flow and ingress/egress regulated...
underwent another rehabilitation regarding its drainage systems. The expressway is known to be flooded during the rainy season and the goal of the project is to fix the drainage systems within the road to prevent flooding. Within this period, certain lanes of the road were closed to the traffic. This in turn caused massive traffic jams along the road and the speed limit on the construction sites were reduced from 80/100 km/h to 60 km/h.

Exit numbers are based on kilometer post. Exits begin at 9 because the NLEx is a logical continuation of Andres Bonifacio
Andres Bonifacio
Andrés Bonifacio y de Castro was a Filipino nationalist and revolutionary. He was a founder and later Supremo of the Katipunan movement which sought the independence of the Philippines from Spanish colonial rule and started the Philippine Revolution...
Avenue. Rizal Park is designated as Kilometer Zero.

Except the North Food Exchange and Plaridel Bypass Road Exits, all of these exits are still pending construction. The exits from Tarlac City
Tarlac City
The City of Tarlac is a 1st class city in the province of Tarlac, Philippines. Tarlac provincial capitol building is shown on the back of the Philippines 500 peso note that features former Senator Benigno Aquino Jr...
to Rosario, La Union
Rosario, La Union
Rosario is a 1st class municipality in the province of La Union, Philippines. According to the latest Philippine census, it has a population of 49,025 people in 8,154 households.The Kennon Road starts from this town and ends at Baguio City...
are still being planned, being part of the Tarlac-Pangasinan-La Union Expressway.