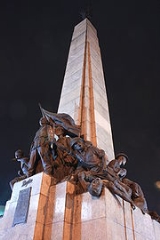 The City of Caloocan (official name: Makasaysayang Lungsod ng Kalookan, The Historic City of Caloocan) is one of the cities and municipalities that comprises the Metro Manila region (National Capital Region)
Metro Manila
Metropolitan Manila , the National Capital Region , or simply Metro Manila, is the metropolitan region encompassing the City of Manila and its surrounding areas in the Philippines...
in the Philippines
Philippines
The Philippines , officially known as the Republic of the Philippines , is a country in Southeast Asia in the western Pacific Ocean. To its north across the Luzon Strait lies Taiwan. West across the South China Sea sits Vietnam...
. It is a major residential area inside Metro Manila. Located just north of the capital City of Manila
Manila
Manila is the capital of the Philippines. It is one of the sixteen cities forming Metro Manila.Manila is located on the eastern shores of Manila Bay and is bordered by Navotas and Caloocan to the north, Quezon City to the northeast, San Juan and Mandaluyong to the east, Makati on the southeast,...
, Caloocan is the country's third most populous city with a population of 1,378,856 as of the 2007 census.

How many private firms are there in caloocan city?

What is the economic state of caloocan city at the year of 1920's?
More
x