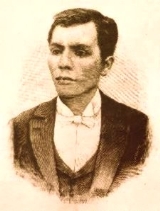 Overview
Andrés Bonifacio y de Castro (30 November 1863 – 10 May 1897) was a Filipino
Filipino people
The Filipino people or Filipinos are an Austronesian ethnic group native to the islands of the Philippines. There are about 92 million Filipinos in the Philippines, and about 11 million living outside the Philippines ....
nationalist and revolutionary
Revolutionary
A revolutionary is a person who either actively participates in, or advocates revolution. Also, when used as an adjective, the term revolutionary refers to something that has a major, sudden impact on society or on some aspect of human endeavor.-Definition:...
. He was a founder and later Supremo ("supreme leader") of the Katipunan
Katipunan
The Katipunan was a Philippine revolutionary society founded by anti-Spanish Filipinos in Manila in 1892, whose primary aim was to gain independence from Spain through revolution. The society was initiated by Filipino patriots Andrés Bonifacio, Teodoro Plata, Ladislao Diwa, and others on the night...
movement which sought the independence of the Philippines
Philippines
The Philippines , officially known as the Republic of the Philippines , is a country in Southeast Asia in the western Pacific Ocean. To its north across the Luzon Strait lies Taiwan. West across the South China Sea sits Vietnam...
from Spanish
Spain
Spain , officially the Kingdom of Spain languages]] under the European Charter for Regional or Minority Languages. In each of these, Spain's official name is as follows:;;;;;;), is a country and member state of the European Union located in southwestern Europe on the Iberian Peninsula...
colonial rule and started the Philippine Revolution
Philippine Revolution
The Philippine Revolution , called the "Tagalog War" by the Spanish, was an armed military conflict between the people of the Philippines and the Spanish colonial authorities which resulted in the secession of the Philippine Islands from the Spanish Empire.The Philippine Revolution began in August...
. He is considered a de facto
De facto
De facto is a Latin expression that means "concerning fact." In law, it often means "in practice but not necessarily ordained by law" or "in practice or actuality, but not officially established." It is commonly used in contrast to de jure when referring to matters of law, governance, or...
national hero
Folk hero
A folk hero is a type of hero, real, fictional, or mythological. The single salient characteristic which makes a character a folk hero is the imprinting of the name, personality and deeds of the character in the popular consciousness. This presence in the popular consciousness is evidenced by...
of the Philippines, and is also considered by some Filipino historians to be the first President
President of the Philippines
The President of the Philippines is the head of state and head of government of the Philippines. The president leads the executive branch of the Philippine government and is the commander-in-chief of the Armed Forces of the Philippines...
, but he is not officially recognised as such.
Bonifacio was born to Santiago Bonifacio and Catalina de Castro in Tondo, Manila and was the eldest of five children.

Why was Andres bonifacio regarded as the father of philippine revolution?

Is andres bonifacio considered a political threat of emilio aguinaldo?

1.what are the different accounts of Bonifacio's manner of execution? 2. Do you believe tht the bones were authentic?defend your answer.

Is bonifacio worthy to be accorded with the title "THE GREAT PLEBIAN"defend your anwser.

What are the major contributions of Andres Bonifacio in Philippine Educational System?
More
x