What does E. stand for in the name of Mayor Moises E. Nicolas
More

The town's name comes from the old Tagalog
Tagalog language
Tagalog is an Austronesian language spoken as a first language by a third of the population of the Philippines and as a second language by most of the rest. It is the first language of the Philippine region IV and of Metro Manila...
word "Bokawe" which refers to a type of long bamboo. The town was established in 1606 by Spanish friars and was carved out from the nearby town of Marilao. Bocaue is the mother town of Balagtas,Bulacan which gained its independence as a town.

There are three road crossings in town that are heavily congested during the rush hours: Lolomboy, Wakas and Bocaue road crossings. The Bocaue River runs through most of the town, and the Bocaue Museum is located near the center. The Bocaue River Festival is celebrated on the first Sunday of every July. During the river festival of July 2, 1993, tragedy struck when around 500 people rode the floating pagoda of the miraculous Holy Cross of Wawa way beyond its capacity, causing it to sink, killing more than two hundred people. Despite the lives lost, no one has been made accountable for the tragedy. This incident became known as the Bocaue Pagoda Tragedy.

Bocaue is about 27 kilometers north of Manila through the North Luzon Expressway
North Luzon Expressway
The North Luzon Expressway , and which is formerly called the North Diversion Road, and officially known as Radial Road 8 is a 4 to 8-lane limited-access toll expressway that connects Metro Manila to the provinces of the Central Luzon region in the Philippines...
and the Bocaue Exit (in Barangay Turo). Its major industry is fireworks, making it the Fireworks Capital of the Philippines. It is also an education center in the Marilao/Sta. Maria/Balagtas municipalities area, with college education provided at St. Paul University (town center) and Dr. Yanga's Foundation College & Teaching Hospital
Teaching hospital
A teaching hospital is a hospital that provides clinical education and training to future and current doctors, nurses, and other health professionals, in addition to delivering medical care to patients...
; and private high school and elementary education at St. Paul College (Turo-Igulot boundary)---like the town center university operated by the Sisters of St. Paul de Chartres---, Sto Niño Academy, Integrated School of Montessori (where the English Skills Masters Organization [ESkiMO] started), and Jesus Is Lord College Foundation (operated by the Jesus Is Lord Church).

A small art gallery beside the town's McDonald's
McDonald's
McDonald's Corporation is the world's largest chain of hamburger fast food restaurants, serving around 64 million customers daily in 119 countries. Headquartered in the United States, the company began in 1940 as a barbecue restaurant operated by the eponymous Richard and Maurice McDonald; in 1948...
restaurant called Twenty-Twenty (owned by the town's ophthalmologist and her art photographer husband) sells works by a number of Bulacan painters. Nationally-known Bocauenes in the arts include choreographer Francisca Reyes Aquino and TV actress Jewel Mische
Jewel Mische
Jewel Fatima Avejade Mische is a Filipina actress.-Biography:Although born in Manila, Jewel grew up in Bulacan...
. Pro basketball player Billy Mamaril
Billy Mamaril
John Billy Mamaril is a Filipino professional basketball player currently playing for the Barangay Ginebra Kings. He plays the forward and center positions...
and pastor and two-time presidential candidate Eddie Villanueva
Eddie Villanueva
Eduardo C. Villanueva , known as Bro. Eddie Villanueva, is a religious and political leader in the Philippines and a presidential candidate in the 2010 Philippine election as standard bearer of the Bangon Pilipinas Party...
are also from the town.

Bocaue is also famous for its Bocaue liempo (bacon) roast, crispy pata (cured beef brisket and shank), rellenong bangus (stuffed milkfish
Milkfish
The milkfish is the sole living species in the family Chanidae. - Description and biology :...
) and all sorts of rice cakes.

With the continuous expansion of Metro Manila
Metro Manila
Metropolitan Manila , the National Capital Region , or simply Metro Manila, is the metropolitan region encompassing the City of Manila and its surrounding areas in the Philippines...
, the town is now included in the metropolis' built-up area
Mega Manila
Mega Manila is the term used for the regions of Central Luzon, CALABARZON, MIMAROPA and Metro Manila. It is frequently used in the press, advertising, television and radio...
, which reaches San Ildefonso, Bulacan
San Ildefonso, Bulacan
San Ildefonso is a 1st class municipality in the province of Bulacan, Philippines. According to the latest census, it has a population of 93,438 inhabitants in 15,753 households.- Built up area :...
at its northernmost part. The town of Bocaue is the center route for the national highway called 'Super Highway' - North Luzon Expressway
North Luzon Expressway
The North Luzon Expressway , and which is formerly called the North Diversion Road, and officially known as Radial Road 8 is a 4 to 8-lane limited-access toll expressway that connects Metro Manila to the provinces of the Central Luzon region in the Philippines...
that provides fast transfort to Metro Manila - Manila
Manila
Manila is the capital of the Philippines. It is one of the sixteen cities forming Metro Manila.Manila is located on the eastern shores of Manila Bay and is bordered by Navotas and Caloocan to the north, Quezon City to the northeast, San Juan and Mandaluyong to the east, Makati on the southeast,...
.

Bocaue has its big river called 'Bocaue River' a tributary of 'Santa Maria River' of Santa Maria
Santa Maria
Santa María or Santa Maria may refer to:*The name of the Blessed Virgin Mary or Mary, the mother of Jesus, in various languages such as Italian, Portuguese or SpanishIn nautical transport:...
, Bulacan from 'Angat River' - Angat, Bulacan. The main source of river tributaries is from Sierra Madre Mountain Range - Sierra Madre, Philippines. Due to its location there are many man made fish ponds used for raising and farming fish like Bangus - Milkfish
Milkfish
The milkfish is the sole living species in the family Chanidae. - Description and biology :...
and Tilapia
Tilapia
Tilapia , is the common name for nearly a hundred species of cichlid fish from the tilapiine cichlid tribe. Tilapia inhabit a variety of fresh water habitats, including shallow streams, ponds, rivers and lakes. Historically, they have been of major importance in artisan fishing in Africa and the...
- Cchildfish.

Bocaue is politically subdivided into 19 barangay
Barangay
A barangay is the smallest administrative division in the Philippines and is the native Filipino term for a village, district or ward...
s. 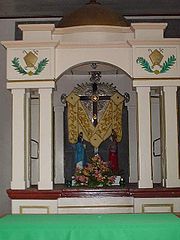