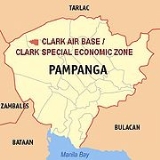 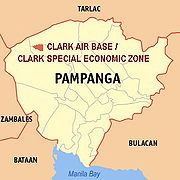 Clark Freeport Zone is a redevelopment of the former Clark Air Base
Clark Air Base
Clark Air Base is a former United States Air Force base on Luzon Island in the Philippines, located 3 miles west of Angeles City, about 40 miles northwest of Metro Manila. Clark Air Base was an American military facility from 1903 to 1991...
, a former United States Air Force
United States Air Force
The United States Air Force is the aerial warfare service branch of the United States Armed Forces and one of the American uniformed services. Initially part of the United States Army, the USAF was formed as a separate branch of the military on September 18, 1947 under the National Security Act of...
base in the Philippines
Philippines
The Philippines , officially known as the Republic of the Philippines , is a country in Southeast Asia in the western Pacific Ocean. To its north across the Luzon Strait lies Taiwan. West across the South China Sea sits Vietnam...
. It is located on the northwest side of Angeles City
Angeles City
The City of Angeles , located within the province of Pampanga in the Philippines, is locally classified as a first-class, highly-urbanized city. Its name is derived from El Pueblo de los Ángeles in honor of its patron saints, Los Santos Ángeles de los Custodios , and the name of its founder, Don...
and borders the municipality of Mabalacat
Mabalacat, Pampanga
Mabalacat is a 1st class municipality in the northern part of the province of Pampanga, Philippines. According to the latest census, it has a population of 203,307 people in 35,134 households....
in the province of Pampanga
Pampanga
Pampanga is a province of the Philippines located in the Central Luzon region. Its capital is the City of San Fernando, Pampanga. Pampanga is bordered by the provinces of Bataan and Zambales to the west, Tarlac and Nueva Ecija to the north, and Bulacan to the southeast...
. It is located about 40 miles (60 km) northwest of Metro Manila
Metro Manila
Metropolitan Manila , the National Capital Region , or simply Metro Manila, is the metropolitan region encompassing the City of Manila and its surrounding areas in the Philippines...
. The zone is a former US military base and has modern infrastructure facilities, generous fiscal and non-fiscal incentives, professional support services and other amenities.

The Master Plan for the 4,400-hectare main zone and 27,600-hectare sub zone will transform the zone into an airport-driven urban center targeting high-end IT enabled industries, aviation and logistics related enterprises, tourism and other sectors.

Though many events still occur at Clark, critics have said that the American government left some residual toxic chemicals that now affect the groundwater near the base. Native Filipinos who live nearby show signs of the adverse effects of these chemicals, such as mercury, resulting in leukemia, gangrene, and other severe diseases and health problems. The United States denies responsibility for these actions. A CRC (Clearwater Revival Company) report claimed that "until a more detailed investigation of uncontrolled hazardous waste sites at Clark AB is completed no conclusions can be reached about the present or future safety of the groundwater supply basin." Several organizations, such as FACES (Filipino American Coalition for Environmental Safeguards) and PTFBC (People Task Force for Bases Clean-up), have attempted to begin the detoxification process on the bases.

Under the new law, Clark Development Corporation (CDC) will remain as administrator of the 4,500-hectare Clark freeport. A subsidiary, Clark International Airport Corporation, runs the Diosdado Macapagal International Airport. Benny Ricafort, on July 10, 2008, was the next president and chief executive officer of the Clark Development Corp. (CDC), to replace Levy Laus effective July 31. Edgardo Pamintuan is the chair of the Subic-Clark Alliance for Development (SCAD) Council.

Since the CDC was created in 1993 to administer Clark, some 389 foreign and domestic investors have moved into the zone, generating some PhP24.3 billion (about US$501.1 million) worth of investments. As of March 2007, over 47,000 people, mostly from Pampanga
Pampanga
Pampanga is a province of the Philippines located in the Central Luzon region. Its capital is the City of San Fernando, Pampanga. Pampanga is bordered by the provinces of Bataan and Zambales to the west, Tarlac and Nueva Ecija to the north, and Bulacan to the southeast...
, Tarlac
Tarlac
Tarlac is a landlocked province of the Philippines located in the Luzon Island. Its capital is Tarlac City. Tarlac borders Pampanga to the south, Nueva Ecija to the east, Pangasinan to the north, and Zambales to the west...
and Bulacan
Bulacan
Bulacan , officially called the Province of Bulacan or simply Bulacan Province, is a first class province of the Republic of the Philippines located in the Central Luzon Region in the island of Luzon, north of Manila , and part of the Metro...
provinces, are currently employed at Clark.
The source of this article is wikipedia, the free encyclopedia.  The text of this article is licensed under the GFDL.