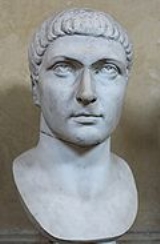 Encyclopedia
This is a list of the Emperor
Emperor
An emperor is a monarch, usually the sovereign ruler of an empire or another type of imperial realm. Empress, the female equivalent, may indicate an emperor's wife or a woman who rules in her own right...
s of the East Roman or Byzantine Empire
Byzantine Empire
The Byzantine Empire was the Eastern Roman Empire during the periods of Late Antiquity and the Middle Ages, centred on the capital of Constantinople. Known simply as the Roman Empire or Romania to its inhabitants and neighbours, the Empire was the direct continuation of the Ancient Roman State...
. This list does not include numerous co-emperors who never attained sole or senior status as rulers, nor the various usurpers or rebels who claimed the imperial title (on whom see List of Byzantine usurpers).

This list begins with Constantine the Great, the first Christian Roman Emperor, who founded Constantinople
Constantinople
Constantinople was the capital of the Roman, Eastern Roman, Byzantine, Latin, and Ottoman Empires. Throughout most of the Middle Ages, Constantinople was Europe's largest and wealthiest city.-Names:...
, and who was regarded by the later Byzantine Emperors as the model ruler. Diocletian
Diocletian
Diocletian |latinized]] upon his accession to Diocletian . c. 22 December 244  – 3 December 311), was a Roman Emperor from 284 to 305....
before him is sometimes considered the first "Byzantine" Emperor in a political sense, as he replaced the republican trappings of the office with a straightforward autocracy
Autocracy
An autocracy is a form of government in which one person is the supreme power within the state. It is derived from the Greek : and , and may be translated as "one who rules by himself". It is distinct from oligarchy and democracy...
, marking the transition from the Principate
Principate
The Principate is the first period of the Roman Empire, extending from the beginning of the reign of Caesar Augustus to the Crisis of the Third Century, after which it was replaced with the Dominate. The Principate is characterized by a concerted effort on the part of the Emperors to preserve the...
to the absolutist Dominate
Dominate
The Dominate was the "despotic" latter phase of government in the ancient Roman Empire from the conclusion of the Third Century Crisis of 235–284 until the formal date of the collapse of the Western Empire in AD 476. It followed the period known as the Principate...
, a more typically oriental and Hellenistic form of monarchy that would characterize the Empire. It was under Constantine however that the major characteristics of the Byzantine state emerged: a Roman polity centered at Constantinople and culturally dominated by the Greek East, with Christianity as the state religion.

All Byzantine Emperors regarded themselves as Roman Emperors, the term "Byzantine" being coined firstly by Western historiography much later, in the 16th century. Although the Pope of Rome
Pope
The Pope is the Bishop of Rome, a position that makes him the leader of the worldwide Catholic Church . In the Catholic Church, the Pope is regarded as the successor of Saint Peter, the Apostle...
and the Germanic rulers of the West recognized the Eastern Empire's claim to the Roman legacy after the fall of the Western Roman Empire
Western Roman Empire
The Western Roman Empire was the western half of the Roman Empire after its division by Diocletian in 285; the other half of the Roman Empire was the Eastern Roman Empire, commonly referred to today as the Byzantine Empire....
, on 25 December 800, Pope Leo III
Pope Leo III
Pope Saint Leo III was Pope from 795 to his death in 816. Protected by Charlemagne from his enemies in Rome, he subsequently strengthened Charlemagne's position by crowning him as Roman Emperor....
crowned King of Franks Charlemagne
Charlemagne
Charlemagne was King of the Franks from 768 and Emperor of the Romans from 800 to his death in 814. He expanded the Frankish kingdom into an empire that incorporated much of Western and Central Europe. During his reign, he conquered Italy and was crowned by Pope Leo III on 25 December 800...
as the Roman Emperor
Holy Roman Emperor
The Holy Roman Emperor is a term used by historians to denote a medieval ruler who, as German King, had also received the title of "Emperor of the Romans" from the Pope...
(which eventually led to the formation of the Holy Roman Empire
Holy Roman Empire
The Holy Roman Empire was a realm that existed from 962 to 1806 in Central Europe.It was ruled by the Holy Roman Emperor. Its character changed during the Middle Ages and the Early Modern period, when the power of the emperor gradually weakened in favour of the princes...
) due to uneasy relations with the Orthodox East
Eastern Orthodox Church
The Orthodox Church, officially called the Orthodox Catholic Church and commonly referred to as the Eastern Orthodox Church, is the second largest Christian denomination in the world, with an estimated 300 million adherents mainly in the countries of Belarus, Bulgaria, Cyprus, Georgia, Greece,...
, an act which was much resented by the Byzantines. This happened after the coronation of Empress Irene, who, as a woman, was not recognized by the Pope to have a right to the throne.

The title of all Emperors listed preceding Heraclius
Heraclius
Heraclius was Byzantine Emperor from 610 to 641.He was responsible for introducing Greek as the empire's official language. His rise to power began in 608, when he and his father, Heraclius the Elder, the exarch of Africa, successfully led a revolt against the unpopular usurper Phocas.Heraclius'...
was officially Augustus
Augustus (honorific)
Augustus , Latin for "majestic," "the increaser," or "venerable", was an Ancient Roman title, which was first held by Gaius Julius Caesar Augustus , and subsequently came to be considered one of the titles of what are now known as the Roman Emperors...
, although various other titles such as Dominus
Dominus (title)
Dominus is the Latin word for master or owner. As a title of sovereignty the term under the Roman Republic had all the associations of the Greek Tyrannos; refused during the early principate, it finally became an official title of the Roman Emperors under Diocletian...
were used as well. For official purposes, their names were preceded by Imperator
Imperator
The Latin word Imperator was originally a title roughly equivalent to commander under the Roman Republic. Later it became a part of the titulature of the Roman Emperors as part of their cognomen. The English word emperor derives from imperator via Old French Empreur...
Caesar
Caesar (title)
Caesar is a title of imperial character. It derives from the cognomen of Julius Caesar, the Roman dictator...
and followed by Augustus. Following Heraclius, the title commonly became the Greek Basileus
Basileus
Basileus is a Greek term and title that has signified various types of monarchs in history. It is perhaps best known in English as a title used by the Byzantine Emperors, but also has a longer history of use for persons of authority and sovereigns in ancient Greece, as well as for the kings of...
(Gr. Βασιλεύς), which had formerly meant generally "king", "sovereign
Monarch
A monarch is the person who heads a monarchy. This is a form of government in which a state or polity is ruled or controlled by an individual who typically inherits the throne by birth and occasionally rules for life or until abdication...
" but now was used in place of Imperator. Following the establishment of a rival Empire in Western Europe (the Holy Roman Empire
Holy Roman Empire
The Holy Roman Empire was a realm that existed from 962 to 1806 in Central Europe.It was ruled by the Holy Roman Emperor. Its character changed during the Middle Ages and the Early Modern period, when the power of the emperor gradually weakened in favour of the princes...
), the title Autokrator
Autokrator
Autokratōr is a Greek epithet applied to an individual who exercises absolute power, unrestrained by superiors. In a historical context, it has been applied to military commanders-in-chief, and to Roman and Byzantine emperors as the translation of the Latin title imperator. Its connection with...
(Gr. Αυτοκράτωρ) was also increasingly used. In the later centuries of the Empire, the emperor could be often referred to by Western Christians as the "Emperor of the Greeks," though they still considered themselves "Roman" Emperors. Towards the end of the Empire, they referred to themselves as "[Emperor's name] in Christ, Emperor and Autocrat of the Romans." 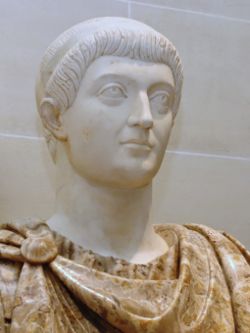 Constans I
Constans
Constans , was Roman Emperor from 337 to 350. He defeated his brother Constantine II in 340, but anger in the army over his personal life and preference for his barbarian bodyguards saw the general Magnentius rebel, resulting in Constans’ assassination in 350.-Career:Constans was the third and...

(Κώνστας Α',
Flavius Iulius Constans) 22 May 337 –
350
Born c. 323, the third son of Constantine I. Inherited central third of Roman Empire upon his father's death, acquired the Balkans in 338. Assassinated during the revolt of Magnentius
Magnentius
Flavius Magnus Magnentius was a usurper of the Roman Empire .-Early life and career:...

(Ιουλιανός "ο Παραβάτης", Flavius Claudius Iulianus)
5 October 361 –
28 June 363
Born in May 332, grandson of Constantius Chlorus and cousin of Constantius II. Proclaimed by his army in Gaul, became legitimate Emperor upon the death of Constantius. Killed on campaign against Sassanid Persia


Laskarid dynasty (Empire of Nicaea
Empire of Nicaea
The Empire of Nicaea was the largest of the three Byzantine Greek successor states founded by the aristocracy of the Byzantine Empire that fled after Constantinople was occupied by Western European and Venetian forces during the Fourth Crusade...
, 1204–1261)