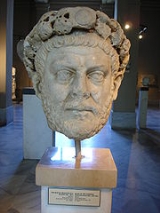 Overview
Diocletian was a Roman Emperor
Roman Emperor
The Roman emperor was the ruler of the Roman State during the imperial period . The Romans had no single term for the office although at any given time, a given title was associated with the emperor...
from 284 to 305.

Born to a family of low status in the Roman province of Dalmatia
Dalmatia (Roman province)
Dalmatia was an ancient Roman province. Its name is probably derived from the name of an Illyrian tribe called the Dalmatae which lived in the area of the eastern Adriatic coast in Classical antiquity....
, Diocletian rose through the ranks of the military to become cavalry commander to the Emperor Carus
Carus
Carus , was Roman Emperor from 282 to 283. During his short reign, Carus fought the Germanic tribes and Sarmatians along the Danube frontier with success. During his campaign against the Sassanid Empire he sacked their capital Ctesiphon, but died shortly thereafter...
. After the deaths of Carus and his son Numerian
Numerian
Numerian , was a Roman Emperor from 282 to 284 with his older brother Carinus. They were sons of Carus, a general raised to the office of praetorian prefect under Emperor Probus in 282.-Reign:...
on campaign in Persia, Diocletian was proclaimed Emperor. The title was also claimed by Carus' other surviving son, Carinus
Carinus
Carinus , was Roman Emperor 282 to 285. The elder son of emperor Carus, he was appointed Caesar and co-emperor of the western portion of the empire upon his father's accession...
, but Diocletian defeated him in the Battle of the Margus
Battle of the Margus
The Battle of the Margus was fought in July 285 between the armies of Roman Emperors Diocletian and Carinus in the valley of the Margus River in Moesia ....
. With his accession to power, Diocletian ended the Crisis of the Third Century
Crisis of the Third Century
The Crisis of the Third Century was a period in which the Roman Empire nearly collapsed under the combined pressures of invasion, civil war, plague, and economic depression...
.

What role did Diocletian play in the spread of Christianity?
More

284    Diocletian is proclaimed emperor by his soldiers.

284    Diocletian is chosen as Roman Emperor.

286    Roman Emperor Diocletian raises Maximian to the rank of ''Caesar''.

303    Diocletian, Roman Emperor, publishes his edict that begins the persecution of Christians in his portion of the Empire.

305    Diocletian and Maximian retire from the office of Roman Emperor.