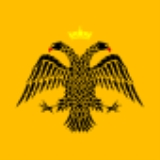 Encyclopedia
The Empire of Nicaea was the largest of the three Byzantine Greek
Byzantine Greeks
Byzantine Greeks or Byzantines is a conventional term used by modern historians to refer to the medieval Greek or Hellenised citizens of the Byzantine Empire, centered mainly in Constantinople, the southern Balkans, the Greek islands, Asia Minor , Cyprus and the large urban centres of the Near East...
successor states founded by the aristocracy of the Byzantine Empire
Byzantine Empire
The Byzantine Empire was the Eastern Roman Empire during the periods of Late Antiquity and the Middle Ages, centred on the capital of Constantinople. Known simply as the Roman Empire or Romania to its inhabitants and neighbours, the Empire was the direct continuation of the Ancient Roman State...
that fled after Constantinople
Constantinople
Constantinople was the capital of the Roman, Eastern Roman, Byzantine, Latin, and Ottoman Empires. Throughout most of the Middle Ages, Constantinople was Europe's largest and wealthiest city.-Names:...
was occupied by Western Europe
Western Europe
Western Europe is a loose term for the collection of countries in the western most region of the European continents, though this definition is context-dependent and carries cultural and political connotations. One definition describes Western Europe as a geographic entity—the region lying in the...
an and Venetian
Republic of Venice
The Republic of Venice or Venetian Republic was a state originating from the city of Venice in Northeastern Italy. It existed for over a millennium, from the late 7th century until 1797. It was formally known as the Most Serene Republic of Venice and is often referred to as La Serenissima, in...
forces during the Fourth Crusade
Fourth Crusade
The Fourth Crusade was originally intended to conquer Muslim-controlled Jerusalem by means of an invasion through Egypt. Instead, in April 1204, the Crusaders of Western Europe invaded and conquered the Christian city of Constantinople, capital of the Eastern Roman Empire...
. Founded by the Laskaris
Laskaris
The Laskaris or Lascaris family was a Byzantine Greek noble family whose members formed the ruling dynasty of the Empire of Nicaea from 1204 to 1261 and remained among the senior nobility up to the dissolution of the Byzantine Empire, whereupon many emigrated to Italy and then to Smyrna...
family, it lasted from 1204 to 1261, when the Nicaean recovery of Constantinople re-established the Byzantine Empire.

In 1204, Byzantine emperor Alexius V Ducas Murtzouphlos fled Constantinople
Constantinople
Constantinople was the capital of the Roman, Eastern Roman, Byzantine, Latin, and Ottoman Empires. Throughout most of the Middle Ages, Constantinople was Europe's largest and wealthiest city.-Names:...
after crusaders
Fourth Crusade
The Fourth Crusade was originally intended to conquer Muslim-controlled Jerusalem by means of an invasion through Egypt. Instead, in April 1204, the Crusaders of Western Europe invaded and conquered the Christian city of Constantinople, capital of the Eastern Roman Empire...
invaded the city. Theodore I Lascaris, the son-in-law of Emperor Alexius III Angelus, was proclaimed emperor, but he too fled, to the city of Nicaea (today İznik
Iznik
İznik is a city in Turkey which is primarily known as the site of the First and Second Councils of Nicaea, the first and seventh Ecumenical councils in the early history of the Church, the Nicene Creed, and as the capital city of the Empire of Nicaea...
) in Bithynia
Bithynia
Bithynia was an ancient region, kingdom and Roman province in the northwest of Asia Minor, adjoining the Propontis, the Thracian Bosporus and the Euxine .-Description:...
, realizing the situation in Constantinople was hopeless.

Numerous truces and alliances were formed and broken over the next few years, as the Byzantine successor states, the Latin Empire, the Bulgaria
Bulgaria
Bulgaria , officially the Republic of Bulgaria , is a parliamentary democracy within a unitary constitutional republic in Southeast Europe. The country borders Romania to the north, Serbia and Macedonia to the west, Greece and Turkey to the south, as well as the Black Sea to the east...
ns, and the Seljuks of Iconium (whose territory also bordered Nicaea) fought each other. In 1211, at Antioch on the Meander, Theodore defeated a major invasion by the Seljuks, who were backing a bid by Alexios III to return to power. Theodore tried to validate his claim to the imperial throne by naming a new Patriarch of Constantinople
Patriarch of Constantinople
The Ecumenical Patriarch is the Archbishop of Constantinople – New Rome – ranking as primus inter pares in the Eastern Orthodox communion, which is seen by followers as the One, Holy, Catholic, and Apostolic Church....
in Nicaea. In 1219, he married the daughter of Latin Empress Yolanda of Flanders
Yolanda of Flanders
Yolanda of Flanders ruled the Latin Empire in Constantinople for her husband Peter II of Courtenay from 1217 to 1219.She was the daughter of Baldwin V, Count of Hainault, and Countess Margaret I of Flanders. Two of her brothers, Baldwin I and then Henry, were emperors in Constantinople...
, but he died in 1222 and was succeeded by his son-in-law John III Ducas Vatatzes.

In 1224, the Latin Kingdom of Thessalonica
Kingdom of Thessalonica
The Kingdom of Thessalonica was a short-lived Crusader State founded after the Fourth Crusade over the conquered Byzantine lands.- Background :...
was captured by the Despot of Epirus, but Epirus itself came under Bulgarian control in 1230. With Trebizond lacking any real power, Nicaea was the only Byzantine state left, and John III expanded his territory into the Aegean Sea
Aegean Sea
The Aegean Sea[p] is an elongated embayment of the Mediterranean Sea located between the southern Balkan and Anatolian peninsulas, i.e., between the mainlands of Greece and Turkey. In the north, it is connected to the Marmara Sea and Black Sea by the Dardanelles and Bosporus...
. In 1235, he allied with Ivan Asen II of Bulgaria
Ivan Asen II of Bulgaria
-Early rule:He was a son of Ivan Asen I of Bulgaria and Elena . Elena, who survived until after 1235, is sometimes alleged to be a daughter of Stefan Nemanja of Serbia, but this relationship is questionable and would have caused various canonical impediments to marriages between various descendants...
, allowing him to extend his influence over Thessalonica and Epirus. In 1242, the Mongols
Mongols
Mongols ) are a Central-East Asian ethnic group that lives mainly in the countries of Mongolia, China, and Russia. In China, ethnic Mongols can be found mainly in the central north region of China such as Inner Mongolia...
invaded Seljuk territory to the east of Nicaea, and although John III was worried they might attack him next, they ended up eliminating the Seljuk threat to Nicaea. In 1245, John allied with the Holy Roman Empire
Holy Roman Empire
The Holy Roman Empire was a realm that existed from 962 to 1806 in Central Europe.It was ruled by the Holy Roman Emperor. Its character changed during the Middle Ages and the Early Modern period, when the power of the emperor gradually weakened in favour of the princes...
by marrying Constance II of Hohenstaufen
Constance II of Hohenstaufen
Anna of Hohenstaufen , born Constance, was the daughter of Frederick II, Holy Roman Emperor and Bianca Lancia.-Byzantine Empress:...
, daughter of Frederick II
Frederick II, Holy Roman Emperor
Frederick II , was one of the most powerful Holy Roman Emperors of the Middle Ages and head of the House of Hohenstaufen. His political and cultural ambitions, based in Sicily and stretching through Italy to Germany, and even to Jerusalem, were enormous...
. By 1248, John had defeated the Bulgarians and surrounded the Latin Empire. He continued to take land from the Latins until his death in 1254.

Theodore II Lascaris, John III’s son, faced invasions from the Bulgarians in Thrace
Thrace
Thrace is a historical and geographic area in southeast Europe. As a geographical concept, Thrace designates a region bounded by the Balkan Mountains on the north, Rhodope Mountains and the Aegean Sea on the south, and by the Black Sea and the Sea of Marmara on the east...
, but successfully defended the territory. Epirus also revolted and allied with Manfred of Sicily
Manfred of Sicily
Manfred was the King of Sicily from 1258 to 1266. He was a natural son of the emperor Frederick II of Hohenstaufen but his mother, Bianca Lancia , is reported by Matthew of Paris to have been married to the emperor while on her deathbed.-Background:Manfred was born in Venosa...
, and Theodore II died in 1258. John IV Lascaris succeeded him, but as he was still a child he was under the regency of the general Michael Palaeologus. Michael proclaimed himself co-emperor (as Michael VIII) in 1259, and soon defeated a combined invasion by Manfred, the Despot of Epirus, and the Latin Prince of Achaea
Principality of Achaea
The Principality of Achaea or of the Morea was one of the three vassal states of the Latin Empire which replaced the Byzantine Empire after the capture of Constantinople during the Fourth Crusade. It became a vassal of the Kingdom of Thessalonica, along with the Duchy of Athens, until Thessalonica...
at the Battle of Pelagonia
Battle of Pelagonia
The Battle of Pelagonia took place in September of 1259, between the Empire of Nicaea and the Despotate of Epirus, Sicily and the Principality of Achaea...
.

In 1260, Michael began the assault on Constantinople itself, which his predecessors had been unable to do. He allied with Genoa
Republic of Genoa
The Most Serene Republic of Genoa |Ligurian]]: Repúbrica de Zêna) was an independent state from 1005 to 1797 in Liguria on the northwestern Italian coast, as well as Corsica from 1347 to 1768, and numerous other territories throughout the Mediterranean....
, and his general Alexios Strategopoulos
Alexios Strategopoulos
Alexios Strategopoulos was a Byzantine general during the reign of Michael VIII Palaiologos, rising to the rank of megas domestikos and Caesar. He is most notable for leading the reconquest of Constantinople from the Latins in 1261.- Early life :...
spent months observing Constantinople in order to plan his attack. In July of 1261, as most of the Latin army was fighting elsewhere, Alexius was able to convince the guards to open the gates of the city. Once inside he burned the Venetian
Republic of Venice
The Republic of Venice or Venetian Republic was a state originating from the city of Venice in Northeastern Italy. It existed for over a millennium, from the late 7th century until 1797. It was formally known as the Most Serene Republic of Venice and is often referred to as La Serenissima, in...
quarter (as Venice was an enemy of Genoa, and had been largely responsible for the capture of the city in 1204). Michael was recognized as emperor a few weeks later, restoring the Byzantine Empire. Achaea was soon recaptured, but Trebizond and Epirus remained independent Byzantine Greek states. The restored empire also faced a new threat from the Ottoman Empire
Ottoman Empire
The Ottoman EmpireIt was usually referred to as the "Ottoman Empire", the "Turkish Empire", the "Ottoman Caliphate" or more commonly "Turkey" by its contemporaries...
, when it arose to replace the defeated Seljuks.

The Nicaean Empire consisted of Byzantium's most highly populated Greek region, with the exception of Thrace which was under Latin/Bulgar control. As such, the Empire was able to raise a reasonably numerous military force of around 20,000 soldiers at its height – numbers recorded as participating in its numerous wars against the Crusader states. The Nicaeans continued some aspects of the Komnenian army
Komnenian army
The Komnenian Byzantine army or Komnenian army was the force established by Byzantine emperor Alexios I Komnenos during the late 11th/early 12th century, and perfected by his successors John II Komnenos and Manuel I Komnenos during the 12th century. Alexios constructed a new army from the ground...
, but without the resources available to the Komnenian emperors the Nicaean Byzantines could not match the numbers, nor the quality, of the armies that the emperor Manuel and his predecessors had fielded. Western Asia Minor had access to the sea, making it wealthier than most of the splinter states around and in time became the most powerful state in the region, if only for a short period.