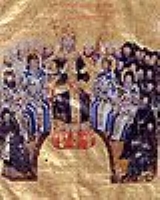 John had no imperial ambitions of his own, and refused to be crowned co-emperor despite being offered the opportunity by Andronikos III Palaiologos several times during the reign of latter. After the death of the emperor, John again refused to take the throne, and insisted that the rightful heir was John V, and that he would assume administrative control of the Empire until he was of age. Despite his stalwart devotion to the young emperor and his mother the empress Anna of Savoy
Anna of Savoy
Anna of Savoy, born Giovanna, was a Byzantine Empress consort, as the second wife of Andronikos III Palaiologos.-Family:She was a daughter of Amadeus V, Count of Savoy and his second wife Maria of Brabant. Her maternal grandparents were John I, Duke of Brabant and Margaret of Flanders...
, his friendship with the late emperor had aroused both the jealousy of the Patriarch of Constantinople and his former protege Alexios Apokaukos
Alexios Apokaukos
Alexios Apokaukos was a leading Byzantine statesman and high-ranking military officer during the reigns of emperors Andronikos III Palaiologos and John V Palaiologos...
, and the paranoia of the empress who suspected him to be an usurper. When John Kantakouzenos left Constantinople for Morea, his enemies seized the opportunity to declare John V emperor and order the disbandment of Kantakouzenos's army. When news reached the army at Didymoteichon in Thrace
Thrace
Thrace is a historical and geographic area in southeast Europe. As a geographical concept, Thrace designates a region bounded by the Balkan Mountains on the north, Rhodope Mountains and the Aegean Sea on the south, and by the Black Sea and the Sea of Marmara on the east...
, they declared Kantakouzenos emperor, and this marked the start of the civil war between John Kantakouzenos and the regency in Constantinople headed by Anna of Savoy, Apokaukos and the Patriarch.

In 1347, he entered Constantinople in triumph with an army of 1,000 men, and forced his opponents to an arrangement by which he became joint emperor with John V Palaiologos and sole administrator during the minority of his colleague. His triumph in the six-year civil war is the subject of the poem "John Kantakouzenos Triumphs" by the modern Greek poet Constantine Cavafy.

During this period, the empire, already broken up and reduced to narrow limits, was assailed on every side. There was an unsuccessful war
Byzantine–Genoese War (1348–1349)
The Byzantine–Genoese War of 1348–1349 was fought over control over custom dues through the Bosphorus. The Byzantines attempted to break Byzantium's dependence for food and maritime commerce on the Genoese merchants of Galata, and also to rebuild their own naval power...
with the Genoese
Genoa
Genoa |Ligurian]] Zena ; Latin and, archaically, English Genua) is a city and an important seaport in northern Italy, the capital of the Province of Genoa and of the region of Liguria....
, and in particular their colony at Galata
Galata
Galata or Galatae is a neighbourhood in the Beyoğlu district on the European side of Istanbul, the largest city of Turkey. Galata is located at the northern shore of the Golden Horn, the inlet which separates it from the historic peninsula of old Constantinople. The Golden Horn is crossed by...
, across from Constantinople itself. His later involvement in the Venetian–Genoese War of 1350–1355 also brought no concrete results, and was terminated by a treaty with Genoa in May 1352. War also erupted against the Serbians, who were at that time establishing an extensive empire on the north-western frontiers; and there was a hazardous alliance with the Ottoman Turks, who made their first permanent settlement in Europe, at Gallipoli
Gallipoli
The Gallipoli peninsula is located in Turkish Thrace , the European part of Turkey, with the Aegean Sea to the west and the Dardanelles straits to the east. Gallipoli derives its name from the Greek "Καλλίπολις" , meaning "Beautiful City"...
in Thrace
Thrace
Thrace is a historical and geographic area in southeast Europe. As a geographical concept, Thrace designates a region bounded by the Balkan Mountains on the north, Rhodope Mountains and the Aegean Sea on the south, and by the Black Sea and the Sea of Marmara on the east...
, towards the end of his reign. In 1349, he sent a newly-built fleet of 9 fair-sized ships and about 100 smaller ones against the Genoese, but it was captured in its entirety. Then in 1351, he sent 12 ships to help Venice against Genoa, but the fleet was defeated.

Kantakouzenos was far too ready to invoke the aid of foreigners in his European quarrels; and as he had no money to pay them, this gave them a ready pretext for seizing upon a European town. The financial burdens imposed by him had long been displeasing to his subjects, and a strong party had always favoured John V Palaiologos. Hence, when the latter entered Constantinople at the end of 1354, his success was easy.


Retirement as a monk

Kantakouzenos retired to a monastery
Monastery
Monastery denotes the building, or complex of buildings, that houses a room reserved for prayer as well as the domestic quarters and workplace of monastics, whether monks or nuns, and whether living in community or alone .Monasteries may vary greatly in size – a small dwelling accommodating only...
(where he assumed the name of Joasaph Christodoulos) and occupied himself in literary labours.