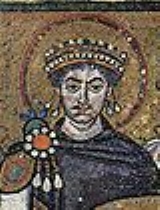 One of the most important figures of Late Antiquity
Late Antiquity
Late Antiquity is a periodization used by historians to describe the time of transition from Classical Antiquity to the Middle Ages, in both mainland Europe and the Mediterranean world. Precise boundaries for the period are a matter of debate, but noted historian of the period Peter Brown proposed...
and the last Roman Emperor to speak Latin
Latin
Latin is an Italic language originally spoken in Latium and Ancient Rome. It, along with most European languages, is a descendant of the ancient Proto-Indo-European language. Although it is considered a dead language, a number of scholars and members of the Christian clergy speak it fluently, and...
as a first language, Justinian's rule constitutes a distinct epoch in the history of the Eastern Roman Empire.

Did justinian ban books claiming Jesus was a revolutionary?
More

What legislation occurred under his reign?

What were his religious policies?

What military conquests did he achieve?
More

527    Byzantine Emperor Justin I names his nephew Justinian I as co-ruler and successor to the throne.

527    Justinian I becomes the sole ruler of the Byzantine Empire.

529    First draft of the ''Corpus Juris Civilis'' (a fundamental work in jurisprudence) is issued by Eastern Roman Emperor Justinian I.

558    In Constantinople, the dome of the Hagia Sophia collapses. Justinian I immediately orders that the dome be rebuilt.