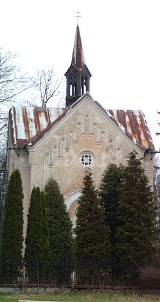 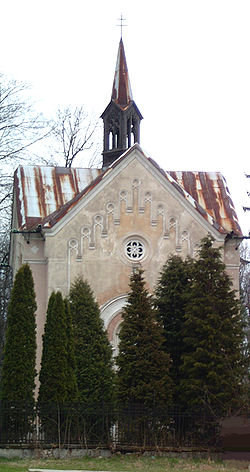 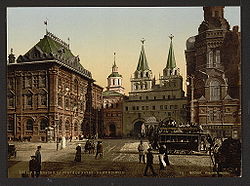 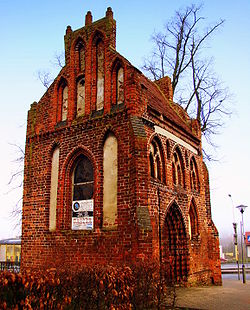 A chapel is a building used by Christians as a place of fellowship and worship
Worship
Worship is an act of religious devotion usually directed towards a deity. The word is derived from the Old English worthscipe, meaning worthiness or worth-ship — to give, at its simplest, worth to something, for example, Christian worship.Evelyn Underhill defines worship thus: "The absolute...
. It may be part of a larger structure or complex, such as a church, college
College
A college is an educational institution or a constituent part of an educational institution. Usage varies in English-speaking nations...
, hospital
Hospital
A hospital is a health care institution providing patient treatment by specialized staff and equipment. Hospitals often, but not always, provide for inpatient care or longer-term patient stays....
, palace
Palace
A palace is a grand residence, especially a royal residence or the home of a head of state or some other high-ranking dignitary, such as a bishop or archbishop. The word itself is derived from the Latin name Palātium, for Palatine Hill, one of the seven hills in Rome. In many parts of Europe, the...
, prison
Prison
A prison is a place in which people are physically confined and, usually, deprived of a range of personal freedoms. Imprisonment or incarceration is a legal penalty that may be imposed by the state for the commission of a crime...
or funeral home
Funeral home
A funeral home, funeral parlor or mortuary, is a business that provides burial and funeral services for the deceased and their families. These services may include aprepared wake and funeral, and the provision of a chapel for the funeral....
, located on board a military or commercial ship, or it may be an entirely free-standing building, sometimes with its own grounds. Many military installations have chapels for the use of military personnel, normally under the leadership of a military chaplain
Military chaplain
A military chaplain is a chaplain who ministers to soldiers, sailors, airmen, marines and other members of the military. In many countries, chaplains also minister to the family members of military personnel, to civilian noncombatants working for military organizations and to civilians within the...
. Until the Protestant Reformation
Protestant Reformation
The Protestant Reformation was a 16th-century split within Western Christianity initiated by Martin Luther, John Calvin and other early Protestants. The efforts of the self-described "reformers", who objected to the doctrines, rituals and ecclesiastical structure of the Roman Catholic Church, led...
, a chapel denoted a place of worship that was either at a secondary location that was not the main responsibility of the local parish priest, or that belonged to a person or institution. Most larger churches had one or more secondary altar
Altar
An altar is any structure upon which offerings such as sacrifices are made for religious purposes. Altars are usually found at shrines, and they can be located in temples, churches and other places of worship...
s, which if they occupied a distinct space, would often be called a chapel.
The word chapel is in particularly common usage in the United Kingdom, and even more so in Wales, for independent or nonconformist
Nonconformism
Nonconformity is the refusal to "conform" to, or follow, the governance and usages of the Church of England by the Protestant Christians of England and Wales.- Origins and use:...
places of worship; and in Scotland and Ireland for Roman Catholic churches. In the UK, due to the rise in popularity of independent or nonconformist chapels throughout the late eighteenth and early nineteenth centuries, by the time of the 1851 census, more people attended the independent chapels than attended the state's Anglican churches.

The word, chapel, like the associated word, chaplain, originally had Christian roots, but is used in a wider context today. While many are denominational, many are non-denominational. The latter are mostly encountered as part of a non-religious institution such as a hospital, prison or military installation. In England, where the Anglican Church
Anglican Communion
The Anglican Communion is an international association of national and regional Anglican churches in full communion with the Church of England and specifically with its principal primate, the Archbishop of Canterbury...
is established by law, nondenominational or inter-faith chapels in such institutions may nonetheless be consecrated by the local Anglican bishop.

Chapels that are built as part of a larger church are holy areas set aside for some specific use or purpose: for instance, many cathedrals and large churches have a "Lady Chapel" in the apse, dedicated to the Virgin Mary
Mary (mother of Jesus)
Mary , commonly referred to as "Saint Mary", "Mother Mary", the "Virgin Mary", the "Blessed Virgin Mary", or "Mary, Mother of God", was a Jewish woman of Nazareth in Galilee...
; parish churches may have such a "Lady Chapel" in a side aisle or a "Chapel of Reservation" where the consecrated bread and wine of the Eucharist are kept in reserve between services, for the purpose of taking Holy Communion to the sick and housebound and, in some Christian traditions, for devotional purposes.

In Roman Catholic Canon Law, a chapel, technically called an "oratory
Oratory (worship)
An oratory is a Christian room for prayer, from the Latin orare, to pray.-Catholic church:In the Roman Catholic Church, an oratory is a structure other than a parish church, set aside by ecclesiastical authority for prayer and the celebration of Mass...
" is a building or part thereof dedicated to the celebration of services, particularly the Mass, which is not a parish church. This may be a private chapel, for the use of one person or a select group (a bishop's private chapel, or the chapel of a convent, for instance); a semi-public oratory, which is partially available to the general public (a seminary chapel that welcomes visitors to services, for instance); or a public oratory (for instance, a hospital or university chapel).

The earliest Christian places of worship are now often referred to as chapels, as they were not dedicated buildings but rather a dedicated chamber
Room
A room is any distinguishable space within a structure.Room may also refer to:* Room , by Emma Donoghue* Room, Nepal* Room for PlayStation Portable, a social networking service* Thomas Gerald Room , Australian mathematician...
within a building, such as a room in an individual's home. Here one or two people could pray without being part of a communion/congregation. People who like to use chapels may find it peaceful and relaxing to be away from the stress of life, without other people moving around them.

The word "chapel" is derived from a relic
Relic
In religion, a relic is a part of the body of a saint or a venerated person, or else another type of ancient religious object, carefully preserved for purposes of veneration or as a tangible memorial...
of Saint Martin of Tours
Martin of Tours
Martin of Tours was a Bishop of Tours whose shrine became a famous stopping-point for pilgrims on the road to Santiago de Compostela. Around his name much legendary material accrued, and he has become one of the most familiar and recognizable Christian saints...
: traditional stories about Martin relate that while he was still a soldier, he cut his military cloak in half to give part to a beggar in need. The other half he wore over his shoulders as a "small cape" . The beggar, the stories claim, was Christ in disguise, and Martin experienced a conversion of heart, becoming first a monk, then abbot, then bishop. This cape came into the possession of the Frankish
Franks
The Franks were a confederation of Germanic tribes first attested in the third century AD as living north and east of the Lower Rhine River. From the third to fifth centuries some Franks raided Roman territory while other Franks joined the Roman troops in Gaul. Only the Salian Franks formed a...
kings, and they kept the relic with them as they did battle. The tent which kept the cape was called the capella and the priests who said daily Mass
Mass (liturgy)
"Mass" is one of the names by which the sacrament of the Eucharist is called in the Roman Catholic Church: others are "Eucharist", the "Lord's Supper", the "Breaking of Bread", the "Eucharistic assembly ", the "memorial of the Lord's Passion and Resurrection", the "Holy Sacrifice", the "Holy and...
in the tent were known as the capellani. From these words we get the names "chapel" and "chaplain
Chaplain
Traditionally, a chaplain is a minister in a specialized setting such as a priest, pastor, rabbi, or imam or lay representative of a religion attached to a secular institution such as a hospital, prison, military unit, police department, university, or private chapel...
".

The word also appears in the Irish language
Irish language
Irish , also known as Irish Gaelic, is a Goidelic language of the Indo-European language family, originating in Ireland and historically spoken by the Irish people. Irish is now spoken as a first language by a minority of Irish people, as well as being a second language of a larger proportion of...
in the Middle Ages, as Welsh people came with the Norman
Normans
The Normans were the people who gave their name to Normandy, a region in northern France. They were descended from Norse Viking conquerors of the territory and the native population of Frankish and Gallo-Roman stock...
and Old English
Old English (Ireland)
The Old English were the descendants of the settlers who came to Ireland from Wales, Normandy, and England after the Norman invasion of Ireland in 1169–71. Many of the Old English became assimilated into Irish society over the centuries...
invaders to the island of Ireland. While the traditional Irish word for church was eaglais (derived from ecclesia), a new word, séipéal (from cappella), came into usage.

In British history, "chapel" or "meeting house
Meeting house
A meeting house describes a building where a public meeting takes place. This includes secular buildings which function like a town or city hall, and buildings used for religious meetings, particularly of some non-conformist Christian denominations....
", was formerly the standard designation for church buildings belonging to independent or nonconformist
Nonconformism
Nonconformity is the refusal to "conform" to, or follow, the governance and usages of the Church of England by the Protestant Christians of England and Wales.- Origins and use:...
religious societies and their members. It was a word particularly associated with the pre-eminence of independent religious practice in rural regions of England and Wales, the northern industrial towns of the late eighteenth and nineteenth centuries, and centres of population close to but outside of the City of London. As a result, "chapel" is sometimes used as an adjective in the UK to describe the members of such churches ("I'm Chapel.").

A proprietary chapel is one that originally belonged to a private person. In the 19th century they were common, often being built to cope with urbanisation. Frequently they were set up by evangelical philanthropists with a vision of spreading Christianity in cities whose needs could no longer be met by the parishes. Some functioned more privately, with a wealthy person building a chapel so they could invite their favorite preachers. They are anomalies in the English ecclesiastical law, having no parish area, but being able to have an Anglican clergyman licensed there. Historically many Anglican Churches were Proprietary Chapels. Over the years they have often been converted into normal Parishes. 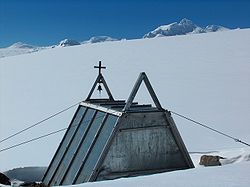 While the usage of the word "chapel" is not exclusively limited to Christian terminology, it is most often found in that context. Nonetheless, the word's meaning can vary by denomination, and non-denominational chapels (sometimes called "meditation rooms") can be found in many hospitals, airports, and even the United Nations headquarters.

Common uses of the word chapel today include: 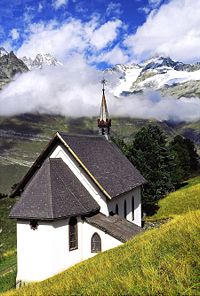 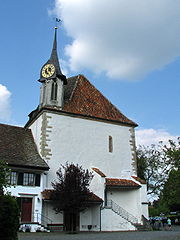