Encyclopedia
The Niccoline Chapel is a chapel
Chapel
A chapel is a building used by Christians as a place of fellowship and worship. It may be part of a larger structure or complex, such as a church, college, hospital, palace, prison or funeral home, located on board a military or commercial ship, or it may be an entirely free-standing building,...
in the Vatican Palace, Rome
Rome
Rome is the capital of Italy and the country's largest and most populated city and comune, with over 2.7 million residents in . The city is located in the central-western portion of the Italian Peninsula, on the Tiber River within the Lazio region of Italy.Rome's history spans two and a half...
. It is especially notable for its fresco paintings by Fra Angelico
Fra Angelico
Fra Angelico , born Guido di Pietro, was an Early Italian Renaissance painter described by Vasari in his Lives of the Artists as having "a rare and perfect talent"...
(1447–1451) and his assistants, who may have executed much of the actual work. The name is derived from its patron, Pope Nicholas V, who had it built for use as his private chapel.

The chapel is located in the Tower of Innocent III, in the most ancient part of the Apostolic Palace. The walls were decorated by Fra Angelico with images of two of the earliest Christian martyrs; the upper level has Episodes from the Life of St. Stephen, and the lower one Scenes from the life of St. Laurence. The vault is painted blue, decorated with stars, and features figures of the Four Evangelists
Four Evangelists
In Christian tradition the Four Evangelists are Matthew, Mark, Luke, and John, the authors attributed with the creation of the four Gospel accounts in the New Testament that bear the following titles:*Gospel according to Matthew*Gospel according to Mark...
in the corners. The pilaster
Pilaster
A pilaster is a slightly-projecting column built into or applied to the face of a wall. Most commonly flattened or rectangular in form, pilasters can also take a half-round form or the shape of any type of column, including tortile....
s are decorated with the eight Doctors of the Church.

Fra Angelico depicted a Deposition of Christ (the removal of Christ from the Cross) on the wall behind the altar, but it has been destroyed. However, his other works in the lunette
Lunette
In architecture, a lunette is a half-moon shaped space, either filled with recessed masonry or void. A lunette is formed when a horizontal cornice transects a round-headed arch at the level of the imposts, where the arch springs. If a door is set within a round-headed arch, the space within the...
s are well preserved. 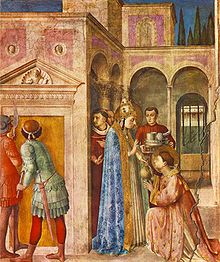 The scenes of St. Stephen follow the Golden Legend
Golden Legend
The Golden Legend is a collection of hagiographies by Jacobus de Voragine that became a late medieval bestseller. More than a thousand manuscripts of the text have survived, compared to twenty or so of its nearest rivals...
, while those of St. Laurence are patterned after the older cycles in the basilica of San Lorenzo fuori le Mura
San Lorenzo fuori le Mura
The Papal Basilica of Saint Lawrence outside the Walls is a Roman Catholic parish church and minor basilica, located in Rome, Italy. The basilica is one of the Seven Pilgrim Churches of Rome and one of the five Patriarchal basilicas, each of which is assigned to a patriarchate. St...
, where he is buried. Stephen was a Greek-speaking Jew, one of the first deacons named in Jerusalem by St. Peter - Ordination of St Stephen with St Stephen distributing Alms (lunette). His prayers (The Prayer of St. Stephen) earned him the hostility of his opponents in the city, who eventually stoned him to death in front of the city gate.

Laurence was a deacon (Ordination of St Laurence) to whom Pope Sixtus II had entrusted the Church's treasure in order to give it to the Roman emperor Valerian
Valerian (emperor)
Valerian , also known as Valerian the Elder, was Roman Emperor from 253 to 260. He was taken captive by Persian king Shapur I after the Battle of Edessa, becoming the only Roman Emperor who was captured as a prisoner of war, resulting in wide-ranging instability across the Empire.-Origins and rise...
(St. Lawrence Receiving the Treasures of the Church). Lawrence instead divided it between the poor (St Laurence distributing Alms), for which act he was martyred. The frescoes underline the similarities in the two figures' lives: both are ordained deacons, both give alms to the poor and both are martyred after a courageous declaration of faith. The choice of these two figures also shows the connection between the Churches of Jerusalem and the Rome.

The frescoes, full of fine architectural details, allude also to Nicholas V's desire to rebuild Rome as the new capital city of Christianity. The large walls in the Martyrdom of St. Stephen hint at the rebuilding of Rome's walls. Further, the schism in the Jewish community in Jerusalem can be compared to the Christian schism witnessed by Nicholas (who is portrayed in the frescoes as his predecessor, Sixtus II).
The source of this article is wikipedia, the free encyclopedia.  The text of this article is licensed under the GFDL.