The Palatine Chapel is the royal chapel
Chapel
A chapel is a building used by Christians as a place of fellowship and worship. It may be part of a larger structure or complex, such as a church, college, hospital, palace, prison or funeral home, located on board a military or commercial ship, or it may be an entirely free-standing building,...
of the Norman kings of Sicily
Sicily
Sicily is a region of Italy, and is the largest island in the Mediterranean Sea. Along with the surrounding minor islands, it constitutes an autonomous region of Italy, the Regione Autonoma Siciliana Sicily has a rich and unique culture, especially with regard to the arts, music, literature,...
situated on the ground floor at the center of the Palazzo Reale
Palazzo dei Normanni
The Palazzo dei Normanni or Royal Palace of Palermo is a palace in Palermo, Italy. It was the seat of the Kings of Sicily during the Norman domination and served afterwards as the main seat of power for the subsequent rulers of Sicily...
in Palermo
Palermo
Palermo is a city in Southern Italy, the capital of both the autonomous region of Sicily and the Province of Palermo. The city is noted for its history, culture, architecture and gastronomy, playing an important role throughout much of its existence; it is over 2,700 years old...
, southern Italy
Italy
Italy , officially the Italian Republic languages]] under the European Charter for Regional or Minority Languages. In each of these, Italy's official name is as follows:;;;;;;;;), is a unitary parliamentary republic in South-Central Europe. To the north it borders France, Switzerland, Austria and...
.

The chapel was commissioned by Roger II of Sicily
Roger II of Sicily
Roger II was King of Sicily, son of Roger I of Sicily and successor to his brother Simon. He began his rule as Count of Sicily in 1105, later became Duke of Apulia and Calabria , then King of Sicily...
in 1132 to be built upon an older chapel (now the crypt) constructed around 1080. It took eight years to build and many more to decorate with mosaic
Mosaic
Mosaic is the art of creating images with an assemblage of small pieces of colored glass, stone, or other materials. It may be a technique of decorative art, an aspect of interior decoration, or of cultural and spiritual significance as in a cathedral...
s and fine art. The sanctuary, dedicated to Saint Peter
Saint Peter
Saint Peter or Simon Peter was an early Christian leader, who is featured prominently in the New Testament Gospels and the Acts of the Apostles. The son of John or of Jonah and from the village of Bethsaida in the province of Galilee, his brother Andrew was also an apostle...
, is reminiscent of a domed basilica
Basilica
The Latin word basilica , was originally used to describe a Roman public building, usually located in the forum of a Roman town. Public basilicas began to appear in Hellenistic cities in the 2nd century BC.The term was also applied to buildings used for religious purposes...
. It has three apse
Apse
In architecture, the apse is a semicircular recess covered with a hemispherical vault or semi-dome...
s, as is usual in Byzantine architecture
Byzantine architecture
Byzantine architecture is the architecture of the Byzantine Empire. The empire gradually emerged as a distinct artistic and cultural entity from what is today referred to as the Roman Empire after AD 330, when the Roman Emperor Constantine moved the capital of the Roman Empire east from Rome to...
, with six pointed arches (three on each side of the central nave) resting on recycled classical column
Column
A column or pillar in architecture and structural engineering is a vertical structural element that transmits, through compression, the weight of the structure above to other structural elements below. For the purpose of wind or earthquake engineering, columns may be designed to resist lateral forces...
s.

The mosaic
Mosaic
Mosaic is the art of creating images with an assemblage of small pieces of colored glass, stone, or other materials. It may be a technique of decorative art, an aspect of interior decoration, or of cultural and spiritual significance as in a cathedral...
s of the Palatine Chapel are of unparalleled elegance as concerns elongated proportions and streaming draperies of figures. They are also noted for subtle modulations of colour and luminance. The oldest are probably those covering the ceiling, the drum, and the dome. The shimmering mosaics of the transept
Transept
For the periodical go to The Transept.A transept is a transverse section, of any building, which lies across the main body of the building. In Christian churches, a transept is an area set crosswise to the nave in a cruciform building in Romanesque and Gothic Christian church architecture...
, presumably dating from the 1140s and attributed to Byzantine artists, illustrate scenes from the Acts of the Apostles
Acts of the Apostles
The Acts of the Apostles , usually referred to simply as Acts, is the fifth book of the New Testament; Acts outlines the history of the Apostolic Age...
. Every composition is set within an ornamental frame, not dissimilar to that used in contemporaneous mosaic icon
Icon
An icon is a religious work of art, most commonly a painting, from Eastern Christianity and in certain Eastern Catholic churches...
s. 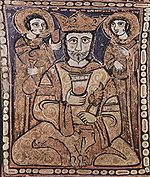 The rest of the mosaics, dated to the 1160s or the 1170s, is executed in a cruder manner and feature Latin
Latin
Latin is an Italic language originally spoken in Latium and Ancient Rome. It, along with most European languages, is a descendant of the ancient Proto-Indo-European language. Although it is considered a dead language, a number of scholars and members of the Christian clergy speak it fluently, and...
(rather than Greek) inscriptions. Probably a work of local craftsmen, these pieces are more narrative and illustrative than transcendental. A few mosaics have a secular character and represent oriental flora
Flora
Flora is the plant life occurring in a particular region or time, generally the naturally occurring or indigenous—native plant life. The corresponding term for animals is fauna.-Etymology:...
and fauna
Fauna
Fauna or faunæ is all of the animal life of any particular region or time. The corresponding term for plants is flora.Zoologists and paleontologists use fauna to refer to a typical collection of animals found in a specific time or place, e.g. the "Sonoran Desert fauna" or the "Burgess shale fauna"...
. This may be the only substantial passage of secular Byzantine mosaic extant today.

The chapel combines harmoniously a variety of styles: the Norman architecture
Norman architecture
About|Romanesque architecture, primarily English|other buildings in Normandy|Architecture of Normandy.File:Durham Cathedral. Nave by James Valentine c.1890.jpg|thumb|200px|The nave of Durham Cathedral demonstrates the characteristic round arched style, though use of shallow pointed arches above the...
and door decor, the Arabic arches and scripts adorning the roof, the Byzantine dome and mosaics. For instance, clusters of four eight-pointed stars, typical for Muslim design, are arranged on the ceiling so as to form a Christian cross
Cross
A cross is a geometrical figure consisting of two lines or bars perpendicular to each other, dividing one or two of the lines in half. The lines usually run vertically and horizontally; if they run obliquely, the design is technically termed a saltire, although the arms of a saltire need not meet...
.

Other remarkable features of the chapel include the Carolingian
Carolingian
The Carolingian dynasty was a Frankish noble family with origins in the Arnulfing and Pippinid clans of the 7th century AD. The name "Carolingian", Medieval Latin karolingi, an altered form of an unattested Old High German *karling, kerling The Carolingian dynasty (known variously as the...
throne
Throne
A throne is the official chair or seat upon which a monarch is seated on state or ceremonial occasions. "Throne" in an abstract sense can also refer to the monarchy or the Crown itself, an instance of metonymy, and is also used in many expressions such as "the power behind the...
, a low stage for royal receptions, and a balcony
Balcony
Balcony , a platform projecting from the wall of a building, supported by columns or console brackets, and enclosed with a balustrade.-Types:The traditional Maltese balcony is a wooden closed balcony projecting from a...
which allowed the king to view religious processions from above. In addition, the muqarnas ceiling is spectacular. The hundreds of facets were painted, notably with many purely ornamental vegetal and zoomorphic designs but also with scenes of daily life and many subjects that have not yet been explained. Stylistically influenced by Iraqi 'Abbasid art, these paintings are innovative in their more spatially aware representation of personages and of animals.
The source of this article is wikipedia, the free encyclopedia.  The text of this article is licensed under the GFDL.