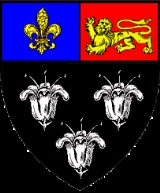 Overview
Eton College, often referred to simply as Eton, is a British independent school for boys aged 13 to 18. It was founded in 1440 by King Henry VI
Henry VI of England
Henry VI was King of England from 1422 to 1461 and again from 1470 to 1471, and disputed King of France from 1422 to 1453. Until 1437, his realm was governed by regents. Contemporaneous accounts described him as peaceful and pious, not suited for the violent dynastic civil wars, known as the Wars...
as "The King's College of Our Lady of Eton besides Wyndsor".

It is located in Eton
Eton, Berkshire
Eton is a town and civil parish in Berkshire, England, lying on the opposite bank of the River Thames to Windsor and connected to it by Windsor Bridge. The parish also includes the large village of Eton Wick, 2 miles west of the town, and has a population of 4,980. Eton was in Buckinghamshire until...
, near Windsor
Windsor, Berkshire
Windsor is an affluent suburban town and unparished area in the Royal Borough of Windsor and Maidenhead in Berkshire, England. It is widely known as the site of Windsor Castle, one of the official residences of the British Royal Family....
in England, north of Windsor Castle
Windsor Castle
Windsor Castle is a medieval castle and royal residence in Windsor in the English county of Berkshire, notable for its long association with the British royal family and its architecture. The original castle was built after the Norman invasion by William the Conqueror. Since the time of Henry I it...
, and is one of the original nine English public schools
Independent school (UK)
An independent school is a school that is not financed through the taxation system by local or national government and is instead funded by private sources, predominantly in the form of tuition charges, gifts and long-term charitable endowments, and so is not subject to the conditions imposed by...
as defined by the Public Schools Act 1868
Public Schools Act 1868
The Public Schools Act 1868 was enacted by the British Parliament to reform and regulate nine of the leading English boys' schools. They were described as "public schools" as admission was open to boys from anywhere and was not limited to those living in a particular locality...
.

Eton has a long list of distinguished former pupils.

How has b block changed throughout the ages in Eton?
More
x