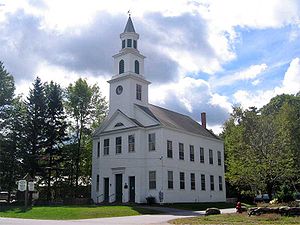 A meeting house describes a building where a public meeting takes place. This includes secular
Secularity
Secularity is the state of being separate from religion.For instance, eating and bathing may be regarded as examples of secular activities, because there may not be anything inherently religious about them...
buildings which function like a town or city hall
City hall
In local government, a city hall, town hall or a municipal building or civic centre, is the chief administrative building of a city...
, and buildings used for religious meetings, particularly of some non-conformist Christian denominations.

A meeting house may have a dual purpose as a place of worship and public discourse, as in early American Puritan congregations.

Many non-conformist Christian denominations distinguish between a

Christian denominations which use the term "meeting house" to refer to the building in which they hold their worship include: