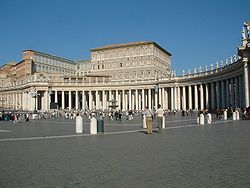 The Apostolic Palace is the official residence of the Pope
Pope
The Pope is the Bishop of Rome, a position that makes him the leader of the worldwide Catholic Church . In the Catholic Church, the Pope is regarded as the successor of Saint Peter, the Apostle...
, which is located in Vatican City
Vatican City
Vatican City , or Vatican City State, in Italian officially Stato della Città del Vaticano , which translates literally as State of the City of the Vatican, is a landlocked sovereign city-state whose territory consists of a walled enclave within the city of Rome, Italy. It has an area of...
. It is also known as the Sacred Palace, the Papal Palace and the Palace of the Vatican. The Vatican itself refers to the building as the Palace of Sixtus V in honor of Pope Sixtus V
Pope Sixtus V
Pope Sixtus V , born Felice Peretti di Montalto, was Pope from 1585 to 1590.-Early life:The chronicler Andrija Zmajević states that Felice's family originated from modern-day Montenegro...
.

The palace is more accurately a series of self-contained buildings within the well-recognised outer structure which is arranged around the Courtyard of Sixtus V (Cortile di Sisto V). It is located North-East of St Peters Basilica and adjacent to the Bastion of Nicholas V and Palace of Gregory XIII.

Rather than a traditional palace (a residential building surrounded by support buildings) the Apostolic Palace houses both residential apartments and support offices of various functions as well as administrative offices not focused on the life and functions of the Pope himself.

The building contains the Papal Apartments
Papal Apartments
The Papal Apartments is the non-official designation for the collection of apartments, both private and state, that wrap around a courtyard on two sides of the third floor of the Apostolic Palace in the Vatican City in Rome...
, various government offices of the Roman Catholic Church
Roman Catholic Church
The Catholic Church, also known as the Roman Catholic Church, is the world's largest Christian church, with over a billion members. Led by the Pope, it defines its mission as spreading the gospel of Jesus Christ, administering the sacraments and exercising charity...
and the Holy See
Holy See
The Holy See is the episcopal jurisdiction of the Catholic Church in Rome, in which its Bishop is commonly known as the Pope. It is the preeminent episcopal see of the Catholic Church, forming the central government of the Church. As such, diplomatically, and in other spheres the Holy See acts and...
, private and public chapels, Vatican Museums
Vatican Museums
The Vatican Museums , in Viale Vaticano in Rome, inside the Vatican City, are among the greatest museums in the world, since they display works from the immense collection built up by the Roman Catholic Church throughout the centuries, including some of the most renowned classical sculptures and...
and the Vatican library
Vatican Library
The Vatican Library is the library of the Holy See, currently located in Vatican City. It is one of the oldest libraries in the world and contains one of the most significant collections of historical texts. Formally established in 1475, though in fact much older, it has 75,000 codices from...
, including the Borgia Apartment
Borgia Apartment
The Borgia Apartment is a suite of rooms in the Apostolic Palace in the Vatican.-History:The Borgia Apartment was adapted for personal use by Pope Alexander VI ....
now used to house artworks.

The ancient Vatican Palace had fallen into disrepair during the period of the Avignon Papacy
Avignon Papacy
The Avignon Papacy was the period from 1309 to 1376 during which seven Popes resided in Avignon, in modern-day France. This arose from the conflict between the Papacy and the French crown....
, when the popes did not reside in Rome. In 1436 the Spanish traveller Pedro Tafur
Pedro Tafur
Pedro Tafur was a Spanish traveler and writer. Born in Córdoba, to a branch of the noble house of Guzmán, Tafur traveled across three continents during the years 1436 to 1439. During the voyage, he participated in various battles, visited shrines, and rendered diplomatic services for Juan II of...
found it still in poor condition: "The Pope's dwelling is a mediocre place and when I was there it was ill-kept."

In the 15th century, the Apostolic palace was placed under the authority of the prefect of the Apostolic palace. This position of Apostolic prefect lasted from the 15th century till the 1800s, when the Papal States
Papal States
The Papal State, State of the Church, or Pontifical States were among the major historical states of Italy from roughly the 6th century until the Italian peninsula was unified in 1861 by the Kingdom of Piedmont-Sardinia .The Papal States comprised territories under...
fell into economic difficulties. In 1824, when this post was reviewed to save money, Leo XII created a committee to administer the palace.

The term Apostolic Palace has been used in other contexts not directly related to the actual Palace of Sixtus V.

The term was also referenced in the video game Civilization IV: Beyond the Sword
Civilization IV: Beyond the Sword
Civilization IV: Beyond the Sword is the second official expansion pack of the turn-based strategy video game Civilization IV. The expansion focuses on adding content to the in-game time periods following the invention of gunpowder, and includes more general content such as 11 new scenarios, 10 new...
, where a player could establish an Apostolic Palace as the symbolic "home" of a civilization's state religion. While the game's developers did represent the Apostolic Palace function with an image of St. Peter's Square (adjacent to the Apostolic Palace) in which the image, somewhat ironically, does not actually include a view of the Palace itself. Regardless, the in-game function of the Apostolic Palace is not religion-specific and the use of the term is representative of religious administration generally, rather than a specific reference to the Vatican
Holy See
The Holy See is the episcopal jurisdiction of the Catholic Church in Rome, in which its Bishop is commonly known as the Pope. It is the preeminent episcopal see of the Catholic Church, forming the central government of the Church. As such, diplomatically, and in other spheres the Holy See acts and...
.