Encyclopedia
The 2nd millennium BC marks the transition from the Middle to the Late Bronze Age
Bronze Age
The Bronze Age is a period characterized by the use of copper and its alloy bronze as the chief hard materials in the manufacture of some implements and weapons. Chronologically, it stands between the Stone Age and Iron Age...
.

Its first half is dominated by the Middle Kingdom of Egypt
Middle Kingdom of Egypt
The Middle Kingdom of Egypt is the period in the history of ancient Egypt stretching from the establishment of the Eleventh Dynasty to the end of the Fourteenth Dynasty, between 2055 BC and 1650 BC, although some writers include the Thirteenth and Fourteenth dynasties in the Second Intermediate...
and Babylonia
Babylonia
Babylonia was an ancient cultural region in central-southern Mesopotamia , with Babylon as its capital. Babylonia emerged as a major power when Hammurabi Babylonia was an ancient cultural region in central-southern Mesopotamia (present-day Iraq), with Babylon as its capital. Babylonia emerged as...
. The alphabet
Middle Bronze Age alphabets
Proto-Sinaitic is a Middle Bronze Age script attested in a very small collection of inscriptions at Serabit el-Khadim in the Sinai Peninsula. Due to the extreme scarcity of Proto-Sinaitic signs, very little is known with certainty about the nature of the script...
develops. Indo-Iranian
Indo-Iranians
Indo-Iranian peoples are a linguistic group consisting of the Indo-Aryan, Iranian, Dardic and Nuristani peoples; that is, speakers of Indo-Iranian languages, a major branch of the Indo-European language family....
migration onto the Iranian plateau
Iranian plateau
The Iranian plateau, or Iranic plateau, is a geological formation in Southwest Asia. It is the part of the Eurasian Plate wedged between the Arabian and Indian plates, situated between the Zagros mountains to the west, the Caspian Sea and the Kopet Dag to the north, the Hormuz Strait and Persian...
and onto the Indian subcontinent
Indian subcontinent
The Indian subcontinent, also Indian Subcontinent, Indo-Pak Subcontinent or South Asian Subcontinent is a region of the Asian continent on the Indian tectonic plate from the Hindu Kush or Hindu Koh, Himalayas and including the Kuen Lun and Karakoram ranges, forming a land mass which extends...
propagates the use of the chariot
Chariot
The chariot is a type of horse carriage used in both peace and war as the chief vehicle of many ancient peoples. Ox carts, proto-chariots, were built by the Proto-Indo-Europeans and also built in Mesopotamia as early as 3000 BC. The original horse chariot was a fast, light, open, two wheeled...
. Chariot warfare and population movements lead to violent changes at the center of the millennium, and a new order emerges with Greek
Greece
Greece , officially the Hellenic Republic , and historically Hellas or the Republic of Greece in English, is a country in southeastern Europe....
dominance of the Aegean
Aegean Sea
The Aegean Sea[p] is an elongated embayment of the Mediterranean Sea located between the southern Balkan and Anatolian peninsulas, i.e., between the mainlands of Greece and Turkey. In the north, it is connected to the Marmara Sea and Black Sea by the Dardanelles and Bosporus...
and the rise of the Hittite Empire. The end of the millennium sees the transition to the Iron Age
Iron Age
The Iron Age is the archaeological period generally occurring after the Bronze Age, marked by the prevalent use of iron. The early period of the age is characterized by the widespread use of iron or steel. The adoption of such material coincided with other changes in society, including differing...
. World population
World population
The world population is the total number of living humans on the planet Earth. As of today, it is estimated to be  billion by the United States Census Bureau...
begins to rise steadily, reaching some 50 million towards 1000 BC.

Spending much of their energies in trying to recuperate from the anarchic situation that was at the turn of the millennium, the most powerful civilizations of the time, Egypt
History of Ancient Egypt
The History of Ancient Egypt spans the period from the early predynastic settlements of the northern Nile Valley to the Roman conquest in 30 BC...
and Mesopotamia
Mesopotamia
Mesopotamia is a toponym for the area of the Tigris–Euphrates river system, largely corresponding to modern-day Iraq, northeastern Syria, southeastern Turkey and southwestern Iran.Widely considered to be the cradle of civilization, Bronze Age Mesopotamia included Sumer and the...
, turned their attention to more modest goals. The Pharaohs of the Middle Kingdom of Egypt
Middle Kingdom of Egypt
The Middle Kingdom of Egypt is the period in the history of ancient Egypt stretching from the establishment of the Eleventh Dynasty to the end of the Fourteenth Dynasty, between 2055 BC and 1650 BC, although some writers include the Thirteenth and Fourteenth dynasties in the Second Intermediate...
and their contemporary Kings of Babylon, of Amorite
Amorite
Amorite refers to an ancient Semitic people who occupied large parts of Mesopotamia from the 21st Century BC...
origin, brought good governance without much tyranny, and favoured elegant art and architecture. Farther east, the Indus Valley civilization
Indus Valley Civilization
The Indus Valley Civilization was a Bronze Age civilization that was located in the northwestern region of the Indian subcontinent, consisting of what is now mainly modern-day Pakistan and northwest India...
was in a period of decline, possibly as a result of intense, ruinous flooding.

Egypt and Babylonia's military tactics were still based on foot soldiers transporting their equipment on donkeys. Combined with a weak economy and difficulty in maintaining order, this was a fragile situation that crumbled under the pressure of external forces they could not oppose.


Unrest of the 16th century

About a century before the middle of the millennium, bands of Indo-European
Proto-Indo-Europeans
The Proto-Indo-Europeans were the speakers of the Proto-Indo-European language , a reconstructed prehistoric language of Eurasia.Knowledge of them comes chiefly from the linguistic reconstruction, along with material evidence from archaeology and archaeogenetics...
invaders came from the Central Asia
Central Asia
Central Asia is a core region of the Asian continent from the Caspian Sea in the west, China in the east, Afghanistan in the south, and Russia in the north...
plains and swept through the Near East. They were riding fast two-wheeled chariot
Chariot
The chariot is a type of horse carriage used in both peace and war as the chief vehicle of many ancient peoples. Ox carts, proto-chariots, were built by the Proto-Indo-Europeans and also built in Mesopotamia as early as 3000 BC. The original horse chariot was a fast, light, open, two wheeled...
s powered by horse
Horse
The horse is one of two extant subspecies of Equus ferus, or the wild horse. It is a single-hooved mammal belonging to the taxonomic family Equidae. The horse has evolved over the past 45 to 55 million years from a small multi-toed creature into the large, single-toed animal of today...
s, a system of weaponry developed earlier within the context of plains warfare. This tool of war was unknown among the classical oriental civilizations. Egypt and Babylonia's foot soldiers were unable to defend against the invaders: In 1630 BC, the Hyksos
Hyksos
The Hyksos were an Asiatic people who took over the eastern Nile Delta during the twelfth dynasty, initiating the Second Intermediate Period of ancient Egypt....
swept into the Nile Delta, and in 1595 BC, the Hittites
Hittites
The Hittites were a Bronze Age people of Anatolia.They established a kingdom centered at Hattusa in north-central Anatolia c. the 18th century BC. The Hittite empire reached its height c...
swept into Mesopotamia
Mesopotamia
Mesopotamia is a toponym for the area of the Tigris–Euphrates river system, largely corresponding to modern-day Iraq, northeastern Syria, southeastern Turkey and southwestern Iran.Widely considered to be the cradle of civilization, Bronze Age Mesopotamia included Sumer and the...
.

The peoples in place were quick to adapt to the new tactics, and a new international situation resulted from the change. Though during most of the second half of the 2nd millennium BC several regional powers competed relentlessly for hegemony, many developments occurred: there was new emphasis on grandiose architecture, new clothing fashions, vivid diplomatic correspondence on clay tablet
Clay tablet
In the Ancient Near East, clay tablets were used as a writing medium, especially for writing in cuneiform, throughout the Bronze Age and well into the Iron Age....
s, renewed economic exchanges, and the New Kingdom
New Kingdom
The New Kingdom of Egypt, also referred to as the Egyptian Empire is the period in ancient Egyptian history between the 16th century BC and the 11th century BC, covering the Eighteenth, Nineteenth, and Twentieth Dynasties of Egypt....
of Egypt played the role of the main superpower
Superpower
A superpower is a state with a dominant position in the international system which has the ability to influence events and its own interests and project power on a worldwide scale to protect those interests...
. Among the great states of the time, only Babylon
Babylon
Babylon was an Akkadian city-state of ancient Mesopotamia, the remains of which are found in present-day Al Hillah, Babil Province, Iraq, about 85 kilometers south of Baghdad...
refrained from taking part in battles, mainly due to its new position as the world's religious and intellectual capital.

The Bronze Age
Bronze Age
The Bronze Age is a period characterized by the use of copper and its alloy bronze as the chief hard materials in the manufacture of some implements and weapons. Chronologically, it stands between the Stone Age and Iron Age...
civilization at its final period of time, displayed all its characteristic social traits: low level of urbanization, small cities centered around temples or royal palaces, strict separation of classes between an illiterate mass of peasants and craftsmen, and a powerful military elite
Elite
Elite refers to an exceptional or privileged group that wields considerable power within its sphere of influence...
, knowledge of writing and education reserved to a tiny minority of scribe
Scribe
A scribe is a person who writes books or documents by hand as a profession and helps the city keep track of its records. The profession, previously found in all literate cultures in some form, lost most of its importance and status with the advent of printing...
s, and pronounced aristocrat
Aristocracy
Aristocracy , is a form of government in which a few elite citizens rule. The term derives from the Greek aristokratia, meaning "rule of the best". In origin in Ancient Greece, it was conceived of as rule by the best qualified citizens, and contrasted with monarchy...
ic life.

Near the end of the 2nd millennium BC, new waves of barbarian
Barbarian
Barbarian and savage are terms used to refer to a person who is perceived to be uncivilized. The word is often used either in a general reference to a member of a nation or ethnos, typically a tribal society as seen by an urban civilization either viewed as inferior, or admired as a noble savage...
s, this time riding on horseback, wholly destroyed the Bronze Age world, and were to be followed by waves of social changes that marked the beginning of different times. Also contributing to the changes were the Sea Peoples
Sea Peoples
The Sea Peoples were a confederacy of seafaring raiders of the second millennium BC who sailed into the eastern Mediterranean, caused political unrest, and attempted to enter or control Egyptian territory during the late 19th dynasty and especially during year 8 of Ramesses III of the 20th Dynasty...
, ship-faring raiders of the Mediterranean. 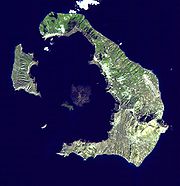 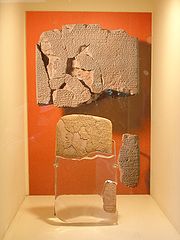