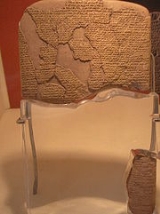 Overview
A peace treaty is an agreement
Agreement
Agreement may refer to:* Agreement or concord, cross-reference between parts of a phrase* Gentlemen's agreement, not enforceable by law* Contract, enforceable in a court of law...
between two or more hostile parties, usually countries or governments, that formally ends a state of war
State of War
State of war may refer to:*a situation where two or more states are at war with each other, with or without a real armed conflict*State of War , a book by James Risen which makes numerous controversial allegations about Central Intelligence Agency activities*State of War , a real-time strategy...
between the parties. It is different from an armistice
Armistice
An armistice is a situation in a war where the warring parties agree to stop fighting. It is not necessarily the end of a war, but may be just a cessation of hostilities while an attempt is made to negotiate a lasting peace...
, which is an agreement to stop hostilities, or a surrender
Surrender (military)
Surrender is when soldiers, nations or other combatants stop fighting and eventually become prisoners of war, either as individuals or when ordered to by their officers. A white flag is a common symbol of surrender, as is the gesture of raising one's hands empty and open above one's head.When the...
, in which an army agrees to give up arms, or a ceasefire
Ceasefire
A ceasefire is a temporary stoppage of a war in which each side agrees with the other to suspend aggressive actions. Ceasefires may be declared as part of a formal treaty, but they have also been called as part of an informal understanding between opposing forces...
in which the parties may agree to temporarily or permanently stop fighting.
There are many possible issues which may be included in a peace treaty, and a treaty's content usually depends on the nature of the conflict being concluded.

How many peace treaties have broken through out history that you know of? mostly interested in those in the Western World.
More
x