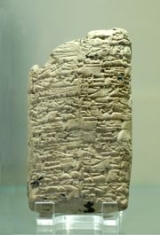 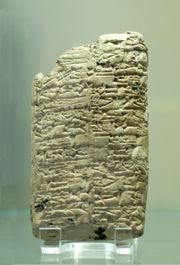 Cuneiform characters were imprinted on a wet clay tablet with a stylus
Stylus
A stylus is a writing utensil, or a small tool for some other form of marking or shaping, for example in pottery. The word is also used for a computer accessory . It usually refers to a narrow elongated staff, similar to a modern ballpoint pen. Many styli are heavily curved to be held more easily...
often made of reed
Reed (plant)
Reed is a generic polyphyletic botanical term used to describe numerous tall, grass-like plants of wet places, which are the namesake vegetation of reed beds...
. Once written upon, many tablets were dried in the sun or air, remaining fragile. Later, these unfired clay tablets could be soaked in water and recycled into new clean tablets. Other tablets, once written, were grilled in a kennal or fired in kilns (or inadvertently, when buildings were burnt down by accident or during conflict) making them hard and durable. Collections of these clay
Clay
Clay is a general term including many combinations of one or more clay minerals with traces of metal oxides and organic matter. Geologic clay deposits are mostly composed of phyllosilicate minerals containing variable amounts of water trapped in the mineral structure.- Formation :Clay minerals...
documents made up the very first archives. They were at the root of first libraries
Library
In a traditional sense, a library is a large collection of books, and can refer to the place in which the collection is housed. Today, the term can refer to any collection, including digital sources, resources, and services...
. Tens of thousands of written tablets, including many fragments, have been found in the Middle East.

In the Minoan
Minoan civilization
The Minoan civilization was a Bronze Age civilization that arose on the island of Crete and flourished from approximately the 27th century BC to the 15th century BC. It was rediscovered at the beginning of the 20th century through the work of the British archaeologist Arthur Evans...
/Mycenaean
Mycenaean Greece
Mycenaean Greece was a cultural period of Bronze Age Greece taking its name from the archaeological site of Mycenae in northeastern Argolis, in the Peloponnese of southern Greece. Athens, Pylos, Thebes, and Tiryns are also important Mycenaean sites...
civilizations, writing has not been observed for any use other than accounting. Tablets serving as labels, with the impression of the side of a wicker basket on the back, and tablets showing yearly summaries, suggest a sophisticated accounting system. In this cultural region the tablets were never fired deliberately, as the clay was recycled on an annual basis. However, some of the tablets were "fired" as a result of uncontrolled fires in the buildings where they were stored. The rest are still tablets of unfired clay, and extremely fragile; some modern scholars are investigating the possibility of firing them now, as an aid to preservation.

The Tărtăria tablets
Tartaria tablets
The Tărtăria tablets are three tablets, known since the late 19th century excavation at the Neolithic site of Turdaş in Transylvania Romania, by Zsófia Torma, which date to around 5300 BC...
, thought to be from the Danubian civilization
Vinca culture
The Vinča culture is a Neolithic archaeological culture in Southeastern Europe, dated to the period 5500–4500 BCE. Named for its type site, Vinča-Belo Brdo, a large tell settlement discovered by Serbian archaeologist Miloje Vasić in 1908, it represents the material remains of a prehistoric society...
, may be older still, having been carbon dated to before 4000 BCE, and possibly dating from as long ago as 5500 BCE, but their interpretation remains controversial.