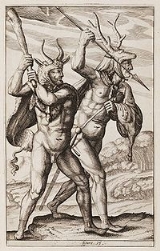 Overview
Barbarian and savage are terms used to refer to a person who is perceived to be uncivilized. The word is often used either in a general reference to a member of a nation or ethnos
Ethnic group
An ethnic group is a group of people whose members identify with each other, through a common heritage, often consisting of a common language, a common culture and/or an ideology that stresses common ancestry or endogamy...
, typically a tribal society as seen by an urban civilization
Civilization
Civilization is a sometimes controversial term that has been used in several related ways. Primarily, the term has been used to refer to the material and instrumental side of human cultures that are complex in terms of technology, science, and division of labor. Such civilizations are generally...
either viewed as inferior, or admired as a noble savage
Noble savage
The term noble savage , expresses the concept an idealized indigene, outsider , and refers to the literary stock character of the same...
. In idiomatic or figurative usage, a "barbarian" may also be an individual reference to a brutal, cruel, warlike, insensitive person.

The term originates from the Greek
Greeks
The Greeks, also known as the Hellenes , are a nation and ethnic group native to Greece, Cyprus and neighboring regions. They also form a significant diaspora, with Greek communities established around the world....
civilization, meaning "anyone who is not Greek".

What is so great about the Barbarians?
More
x