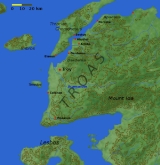 Overview
Troy was a city, both factual and legendary, located in northwest Anatolia
Anatolia
Anatolia is a geographic and historical term denoting the westernmost protrusion of Asia, comprising the majority of the Republic of Turkey...
in what is now Turkey
Turkey
Turkey , known officially as the Republic of Turkey , is a Eurasian country located in Western Asia and in East Thrace in Southeastern Europe...
, southeast of the Dardanelles
Dardanelles
The Dardanelles , formerly known as the Hellespont, is a narrow strait in northwestern Turkey connecting the Aegean Sea to the Sea of Marmara. It is one of the Turkish Straits, along with its counterpart the Bosphorus. It is located at approximately...
and beside Mount Ida. It is best known for being the setting of the Trojan War
Trojan War
In Greek mythology, the Trojan War was waged against the city of Troy by the Achaeans after Paris of Troy took Helen from her husband Menelaus, the king of Sparta. The war is among the most important events in Greek mythology and was narrated in many works of Greek literature, including the Iliad...
described in the Greek Epic Cycle and especially in the Iliad
Iliad
The Iliad is an epic poem in dactylic hexameters, traditionally attributed to Homer. Set during the Trojan War, the ten-year siege of the city of Troy by a coalition of Greek states, it tells of the battles and events during the weeks of a quarrel between King Agamemnon and the warrior Achilles...
, one of the two epic poems attributed to Homer
Homer
In the Western classical tradition Homer , is the author of the Iliad and the Odyssey, and is revered as the greatest ancient Greek epic poet. These epics lie at the beginning of the Western canon of literature, and have had an enormous influence on the history of literature.When he lived is...
. Metrical evidence from the Iliad and the Odyssey
Odyssey
The Odyssey is one of two major ancient Greek epic poems attributed to Homer. It is, in part, a sequel to the Iliad, the other work ascribed to Homer. The poem is fundamental to the modern Western canon, and is the second—the Iliad being the first—extant work of Western literature...
seems to show that the name Ἴλιον (Ilion) formerly began with a digamma
Digamma
Digamma is an archaic letter of the Greek alphabet which originally stood for the sound /w/ and later remained in use only as a numeral symbol for the number "6"...
: Ϝίλιον (Wilion).

[to his soldiers] Myrmidons! My brothers of the sword! I would rather fight beside you than any army of thousands! Let no man forget how menacing we are! We are lions! Do you know what's there, waiting beyond that beach? Immortality! Take it! It's yours!

[to Hector] There are no pacts between lions and men.

[to Briseis] I'll tell you a secret, something they don't teach you in your temple. The Gods envy us. They envy us because we're mortal, because any moment might be our last. Everything is more beautiful because we're doomed. You will never be lovelier than you are now, and we will never be here again.

At night I see their faces: all the men I've killed. They're standing there on the far bank of the river Styx, waiting for me. They say "Welcome, brother."

The Gods only protect the strong.

Men are haunted by the vastness of eternity. And so we ask ourselves: will our actions echo across the centuries? Will strangers hear our names long after we are gone and wonder who we were, how bravely we fought, how fiercely we loved?

I've fought many wars in my time. Some I've fought for land, some for power, some for glory. But I suppose fighting for love makes the most sense of all.