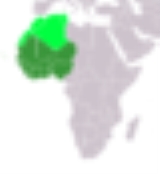 Overview
West Africa or Western Africa is the west
West
West is a noun, adjective, or adverb indicating direction or geography.West is one of the four cardinal directions or compass points. It is the opposite of east and is perpendicular to north and south.By convention, the left side of a map is west....
ernmost region
Region
Region is most commonly found as a term used in terrestrial and astrophysics sciences also an area, notably among the different sub-disciplines of geography, studied by regional geographers. Regions consist of subregions that contain clusters of like areas that are distinctive by their uniformity...
of the Africa
Africa
Africa is the world's second largest and second most populous continent, after Asia. At about 30.2 million km² including adjacent islands, it covers 6% of the Earth's total surface area and 20.4% of the total land area...
n continent
Continent
A continent is one of several very large landmasses on Earth. They are generally identified by convention rather than any strict criteria, with seven regions commonly regarded as continents—they are : Asia, Africa, North America, South America, Antarctica, Europe, and Australia.Plate tectonics is...
. Geopolitically, the UN
United Nations
The United Nations is an international organization whose stated aims are facilitating cooperation in international law, international security, economic development, social progress, human rights, and achievement of world peace...
definition
Subregion
A subregion is a conceptual unit which derives from a larger region or continent and is usually based on location. Cardinal directions, such as south or southern, are commonly used to define a subregion.- United Nations subregions :...
of Western Africa includes the following 16 countries and an area of approximately 5 million square km:
With the exception of Mauritania, all of these countries are members of the ECOWAS or Economic Community of West African States
Economic Community of West African States
The Economic Community of West African States is a regional group of fifteen West African countries. Founded on 28 May 1975, with the signing of the Treaty of Lagos, its mission is to promote economic integration across the region....
which was set up in May 1975. The UN region also includes the island of Saint Helena
Saint Helena
Saint Helena , named after St Helena of Constantinople, is an island of volcanic origin in the South Atlantic Ocean. It is part of the British overseas territory of Saint Helena, Ascension and Tristan da Cunha which also includes Ascension Island and the islands of Tristan da Cunha...
, a British overseas territory in the South Atlantic Ocean
Atlantic Ocean
The Atlantic Ocean is the second-largest of the world's oceanic divisions. With a total area of about , it covers approximately 20% of the Earth's surface and about 26% of its water surface area...
.
West Africa is west of an imagined north-south axis lying close to 10° east longitude
10th meridian east
The meridian 10° east of Greenwich is a line of longitude that extends from the North Pole across the Arctic Ocean, Europe, Africa, the Atlantic Ocean, the Southern Ocean, and Antarctica to the South Pole....
.

What is the current population of West Africa?

What are unique resources
More

What is the size of west africa in square miles?