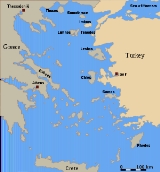 Overview
The Aegean Sea[p]  is an elongated embayment of the Mediterranean Sea
Mediterranean Sea
The Mediterranean Sea is a sea connected to the Atlantic Ocean surrounded by the Mediterranean region and almost completely enclosed by land: on the north by Anatolia and Europe, on the south by North Africa, and on the east by the Levant...
located between the southern Balkan
Balkans
The Balkans is a geopolitical and cultural region of southeastern Europe...
and Anatolia
Anatolia
Anatolia is a geographic and historical term denoting the westernmost protrusion of Asia, comprising the majority of the Republic of Turkey...
n peninsula
Peninsula
A peninsula is a piece of land that is bordered by water on three sides but connected to mainland. In many Germanic and Celtic languages and also in Baltic, Slavic and Hungarian, peninsulas are called "half-islands"....
s, i.e., between the mainlands of Greece
Greece
Greece , officially the Hellenic Republic , and historically Hellas or the Republic of Greece in English, is a country in southeastern Europe....
and Turkey
Turkey
Turkey , known officially as the Republic of Turkey , is a Eurasian country located in Western Asia and in East Thrace in Southeastern Europe...
. In the north, it is connected to the Marmara Sea and Black Sea
Black Sea
The Black Sea is bounded by Europe, Anatolia and the Caucasus and is ultimately connected to the Atlantic Ocean via the Mediterranean and the Aegean seas and various straits. The Bosphorus strait connects it to the Sea of Marmara, and the strait of the Dardanelles connects that sea to the Aegean...
by the Dardanelles
Dardanelles
The Dardanelles , formerly known as the Hellespont, is a narrow strait in northwestern Turkey connecting the Aegean Sea to the Sea of Marmara. It is one of the Turkish Straits, along with its counterpart the Bosphorus. It is located at approximately...
and Bosporus
Bosporus
The Bosphorus or Bosporus , also known as the Istanbul Strait , is a strait that forms part of the boundary between Europe and Asia. It is one of the Turkish Straits, along with the Dardanelles...
. The Aegean Islands
Aegean Islands
The Aegean Islands are the group of islands in the Aegean Sea, with mainland Greece to the west and north and Turkey to the east; the island of Crete delimits the sea to the south, those of Rhodes, Karpathos and Kasos to the southeast...
are within the sea and some bound it on its southern periphery, including Crete
Crete
Crete is the largest and most populous of the Greek islands, the fifth largest island in the Mediterranean Sea, and one of the thirteen administrative regions of Greece. It forms a significant part of the economy and cultural heritage of Greece while retaining its own local cultural traits...
and Rhodes
Rhodes
Rhodes is an island in Greece, located in the eastern Aegean Sea. It is the largest of the Dodecanese islands in terms of both land area and population, with a population of 117,007, and also the island group's historical capital. Administratively the island forms a separate municipality within...
. The Aegean Region consists of nine provinces in southwestern Turkey, in part bordering on the Aegean sea.

The sea was traditionally known as Archipelago
Archipelago
An archipelago , sometimes called an island group, is a chain or cluster of islands. The word archipelago is derived from the Greek ἄρχι- – arkhi- and πέλαγος – pélagos through the Italian arcipelago...
(in Greek
Ancient Greek
Ancient Greek is the stage of the Greek language in the periods spanning the times c. 9th–6th centuries BC, , c. 5th–4th centuries BC , and the c. 3rd century BC – 6th century AD of ancient Greece and the ancient world; being predated in the 2nd millennium BC by Mycenaean Greek...
, Αρχιπέλαγος, meaning "chief sea"), but in English this word's meaning has changed to refer to the Aegean Islands and, generally, to any island group.
The Aegean Sea covers about 214000 square kilometres (82,625.9 sq mi) in area, and measures about 610 kilometres (379 mi) longitudinally and 300 kilometres (186.4 mi) latitudinally.

What is the first dominant culture of the aegean sea area?
More
x