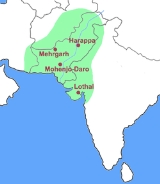 The Indus Valley Civilization (IVC) was a Bronze Age
Bronze Age
The Bronze Age is a period characterized by the use of copper and its alloy bronze as the chief hard materials in the manufacture of some implements and weapons. Chronologically, it stands between the Stone Age and Iron Age...
civilization
Civilization
Civilization is a sometimes controversial term that has been used in several related ways. Primarily, the term has been used to refer to the material and instrumental side of human cultures that are complex in terms of technology, science, and division of labor. Such civilizations are generally...
(3300–1300 BCE; mature period 2600–1900 BCE) that was located in the northwestern region of the Indian subcontinent
Indian subcontinent
The Indian subcontinent, also Indian Subcontinent, Indo-Pak Subcontinent or South Asian Subcontinent is a region of the Asian continent on the Indian tectonic plate from the Hindu Kush or Hindu Koh, Himalayas and including the Kuen Lun and Karakoram ranges, forming a land mass which extends...
, consisting of what is now mainly modern-day Pakistan
Pakistan
Pakistan , officially the Islamic Republic of Pakistan is a sovereign state in South Asia. It has a coastline along the Arabian Sea and the Gulf of Oman in the south and is bordered by Afghanistan and Iran in the west, India in the east and China in the far northeast. In the north, Tajikistan...
and northwest India
India
India , officially the Republic of India , is a country in South Asia. It is the seventh-largest country by geographical area, the second-most populous country with over 1.2 billion people, and the most populous democracy in the world...
. Flourishing around the Indus River
Indus River
The Indus River is a major river which flows through Pakistan. It also has courses through China and India.Originating in the Tibetan plateau of western China in the vicinity of Lake Mansarovar in Tibet Autonomous Region, the river runs a course through the Ladakh district of Jammu and Kashmir and...
basin, the civilization
primarily centred along the Indus and the Punjab region
Punjab region
The Punjab , also spelled Panjab |water]]s"), is a geographical region straddling the border between Pakistan and India which includes Punjab province in Pakistan and the states of the Punjab, Haryana, Himachal Pradesh, Chandigarh and some northern parts of the National Capital Territory of Delhi...
, extending into the Ghaggar-Hakra River
Ghaggar-Hakra River
The Ghaggar-Hakra River is an intermittent river in India and Pakistan that flows only during the monsoon season. The river is known as Ghaggar before the Ottu barrage and as the Hakra downstream of the barrage...
valley and the Ganges-Yamuna Doab
Doab
A Doab is a term used in India and Pakistan for a "tongue" or tract of land lying between two confluent rivers...
. Geographically, the civilization was spread over an area of some 1,260,000 km², making it the largest ancient civilization in the world.

The Indus Valley is one of the world's earliest urban civilizations, along with its contemporaries, Mesopotamia
Mesopotamia
Mesopotamia is a toponym for the area of the Tigris–Euphrates river system, largely corresponding to modern-day Iraq, northeastern Syria, southeastern Turkey and southwestern Iran.Widely considered to be the cradle of civilization, Bronze Age Mesopotamia included Sumer and the...
and Ancient Egypt
Ancient Egypt
Ancient Egypt was an ancient civilization of Northeastern Africa, concentrated along the lower reaches of the Nile River in what is now the modern country of Egypt. Egyptian civilization coalesced around 3150 BC with the political unification of Upper and Lower Egypt under the first pharaoh...
.

Why is art a crucial part of human culture from the first river valley civilizations to modern day?
More

The art of a culture
More
x