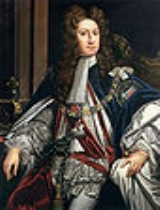 George was born in Hanover
Hanover
Hanover or Hannover, on the river Leine, is the capital of the federal state of Lower Saxony , Germany and was once by personal union the family seat of the Hanoverian Kings of Great Britain, under their title as the dukes of Brunswick-Lüneburg...
, in what is now Germany, and inherited the titles and lands of the Duchy of Brunswick-Lüneburg from his father and uncles. A succession of European wars expanded his German domains during his lifetime, and in 1708 he was ratified as prince-elector
Prince-elector
The Prince-electors of the Holy Roman Empire were the members of the electoral college of the Holy Roman Empire, having the function of electing the Roman king or, from the middle of the 16th century onwards, directly the Holy Roman Emperor.The heir-apparent to a prince-elector was known as an...
of Hanover.