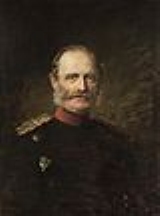 Encyclopedia
George was a King
Monarch
A monarch is the person who heads a monarchy. This is a form of government in which a state or polity is ruled or controlled by an individual who typically inherits the throne by birth and occasionally rules for life or until abdication...
of Saxony
Kingdom of Saxony
The Kingdom of Saxony , lasting between 1806 and 1918, was an independent member of a number of historical confederacies in Napoleonic through post-Napoleonic Germany. From 1871 it was part of the German Empire. It became a Free state in the era of Weimar Republic in 1918 after the end of World War...
of the House of Wettin.

George was born in the Saxon capital Dresden
Dresden
Dresden is the capital city of the Free State of Saxony in Germany. It is situated in a valley on the River Elbe, near the Czech border. The Dresden conurbation is part of the Saxon Triangle metropolitan area....
. He was the second son of King John of Saxony (1801–1873) and his wife Princess Amelia of Bavaria (1801–1877), daughter of King Maximilian I Joseph of Bavaria (1756–1825).

On 11 May 1859 at Belém Palace
Belém Palace
The Belém National Palace, or alternately National Palace of Belém, has, overtime, been the official residence of Portuguese monarchs and, after the installation of the First Republic, the Presidents of the Portuguese Republic...
, Lisbon
Lisbon
Lisbon is the capital city and largest city of Portugal with a population of 545,245 within its administrative limits on a land area of . The urban area of Lisbon extends beyond the administrative city limits with a population of 3 million on an area of , making it the 9th most populous urban...
, George married the Infanta Maria Anna of Portugal
Maria Anna of Portugal
Infanta Maria Ana of Portugal was a Portuguese infanta , the eldest surviving daughter of Queen Maria II of Portugal and her...
(1843–1884), the eldest surviving daughter of Queen Maria II of Portugal (1819–1853) and her consort, King Ferdinand II
Ferdinand II of Portugal
Ferdinand of Saxe-Coburg and Gotha , named Prince Ferdinand Augustus Francis Anthony of Saxe-Coburg-Gotha-Koháry, was King of Portugal as husband of Queen Maria II of Portugal from the birth of their son in 1837 to her death in 1853.In keeping with Portuguese law, only after the birth of his son in...
(1816–1885). Ferdinand was born as the Prince of Saxe-Coburg-Gotha-Kohary
Kohary
Koháry was an ancient Hungarian noble family with seats at Csábrág and Szitnya, now Čabraď and Sitno Castle within Slovakia. The Kohárys belonged among the magnates of Hungary.-Prince Koháry:...
, and as such was a Catholic
Roman Catholic Church
The Catholic Church, also known as the Roman Catholic Church, is the world's largest Christian church, with over a billion members. Led by the Pope, it defines its mission as spreading the gospel of Jesus Christ, administering the sacraments and exercising charity...
Saxon kinsman of George.

George served under his brother Albert's command during the Austro-Prussian War
Austro-Prussian War
The Austro-Prussian War was a war fought in 1866 between the German Confederation under the leadership of the Austrian Empire and its German allies on one side and the Kingdom of Prussia with its German allies and Italy on the...
of 1866 and in the Franco-German War. In the re-organisation of the army which accompanied the march towards Paris, his brother the Crown Prince gained a separate command over the 4th army (Army of the Meuse) consisting of the Saxon XII corps, the Prussian Guard corps, and the IV (Prussian Saxony) corps and George succeeded him in command of the XII corps.

King George was a controversial figure. He divorced by royal decree his eldest son from his daughter-in-law, Crown Princess Luise. Luise's flight from Dresden was due to her father-in-law threatening to have her interned in Sonnestein Mental Asylum for life. Her brother supported her in her wish to escape Saxony. Emperor Franz-Josef of Austria-Hungary did not recognise the divorce.