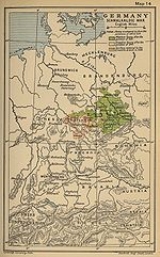 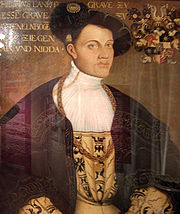 The League was officially established on 27 February 1531, by Philip I, Landgrave of Hesse
Philip I, Landgrave of Hesse
Philip I of Hesse, , nicknamed der Großmütige was a leading champion of the Protestant Reformation and one of the most important of the early Protestant rulers in Germany....
, and John Frederick I, Elector of Saxony, the two most powerful Protestant rulers at the time. It originated as a defensive religious alliance, with the members pledging to defend each other should their territories be attacked by Charles V
Charles V, Holy Roman Emperor
Charles V was ruler of the Holy Roman Empire from 1519 and, as Charles I, of the Spanish Empire from 1516 until his voluntary retirement and abdication in favor of his younger brother Ferdinand I and his son Philip II in 1556.As...
, the Holy Roman Emperor.

The League quickly became more of a territorial political movement, as breaking from the Catholic Church
Roman Catholic Church
The Catholic Church, also known as the Roman Catholic Church, is the world's largest Christian church, with over a billion members. Led by the Pope, it defines its mission as spreading the gospel of Jesus Christ, administering the sacraments and exercising charity...
offered significant economic advantages. In December, 1535, the league admitted anyone who would subscribe to the Augsburg Confession
Augsburg Confession
The Augsburg Confession, also known as the "Augustana" from its Latin name, Confessio Augustana, is the primary confession of faith of the Lutheran Church and one of the most important documents of the Lutheran reformation...
, thus Anhalt
Anhalt
Anhalt was a sovereign county in Germany, located between the Harz Mountains and the river Elbe in Middle Germany. It now forms part of the state of Saxony-Anhalt.- Dukes of Anhalt :...
, Württemberg
Württemberg
Württemberg , formerly known as Wirtemberg or Wurtemberg, is an area and a former state in southwestern Germany, including parts of the regions Swabia and Franconia....
, Pomerania
Duchy of Pomerania
The Duchy of Pomerania was a duchy in Pomerania on the southern coast of the Baltic Sea, ruled by dukes of the House of Pomerania ....
, as well as the free imperial cities
Free Imperial City
In the Holy Roman Empire, a free imperial city was a city formally ruled by the emperor only — as opposed to the majority of cities in the Empire, which were governed by one of the many princes of the Empire, such as dukes or prince-bishops...
of Augsburg
Augsburg
Augsburg is a city in the south-west of Bavaria, Germany. It is a university town and home of the Regierungsbezirk Schwaben and the Bezirk Schwaben. Augsburg is an urban district and home to the institutions of the Landkreis Augsburg. It is, as of 2008, the third-largest city in Bavaria with a...
, Hanover
Hanover
Hanover or Hannover, on the river Leine, is the capital of the federal state of Lower Saxony , Germany and was once by personal union the family seat of the Hanoverian Kings of Great Britain, under their title as the dukes of Brunswick-Lüneburg...
, Frankfurt am Main
Frankfurt
Frankfurt am Main , commonly known simply as Frankfurt, is the largest city in the German state of Hesse and the fifth-largest city in Germany, with a 2010 population of 688,249. The urban area had an estimated population of 2,300,000 in 2010...
, and Kempten
Kempten im Allgäu
Kempten is the largest town in Allgäu, a region in the south-west of Bavaria, Germany. The population was ca 61,000 in 2006. The area was possibly settled originally by Celts, but was later overtaken by the Romans, who called the town Cambodunum...
joined the alliance.

In 1535 Francis I of France
Francis I of France
Francis I was King of France from 1515 until his death. During his reign, huge cultural changes took place in France and he has been called France's original Renaissance monarch...
joined the League against the Habsburgs, but later retracted due to religious conflicts from within. Suleiman the Magnificent
Suleiman the Magnificent
Suleiman I was the tenth and longest-reigning Sultan of the Ottoman Empire, from 1520 to his death in 1566. He is known in the West as Suleiman the Magnificent and in the East, as "The Lawgiver" , for his complete reconstruction of the Ottoman legal system...
had intervened diplomatically in favour of the rapprochement, and is known to have sent at least one letter to the Protestant princes of Germany to encourage them to ally with Francis I against Charles V.

In 1538, the Schmalkaldic League allied with newly reformed
Reformation in Denmark
The Reformation in Denmark–Norway and Holstein was the transition from Roman Catholicism to Lutheranism in the realms ruled by the Copenhagen-based House of Oldenburg in the first half of the sixteenth century...
Denmark
Denmark
Denmark is a Scandinavian country in Northern Europe. The countries of Denmark and Greenland, as well as the Faroe Islands, constitute the Kingdom of Denmark . It is the southernmost of the Nordic countries, southwest of Sweden and south of Norway, and bordered to the south by Germany. Denmark...
. In 1539 the League acquired Brandenburg
Brandenburg
Brandenburg is one of the sixteen federal-states of Germany. It lies in the east of the country and is one of the new federal states that were re-created in 1990 upon the reunification of the former West Germany and East Germany. The capital is Potsdam...
, which was under the leadership of Joachim II Hector
Joachim II Hector, Elector of Brandenburg
Joachim II Hector was a Prince-elector of the Margraviate of Brandenburg . A member of the House of Hohenzollern, Joachim II was the son of Joachim I Nestor, Elector of Brandenburg, and his wife Elizabeth of Denmark, Norway, and Sweden...
. In 1545 the League gained the allegiance of the Electoral Palatinate, under the control of Elector Frederick III
Frederick III, Elector Palatine
Frederick III of Simmern, the Pious, Elector Palatine of the Rhine was a ruler from the house of Wittelsbach, branch Palatinate-Simmern-Sponheim. He was a son of John II of Simmern and inherited the Palatinate from the childless Elector Otto-Henry, Elector Palatine in 1559...
. In 1544 Denmark and the Holy Roman Empire signed the Treaty of Speyer
Treaty of Speyer (1544)
The Treaty of Speyer or Peace of Speyer was signed on May 23, 1544 between Denmark and the Holy Roman Empire during a diet of the Holy Roman Empire in Speyer, Germany. Danish king Christian III had imposed heavy tolls on the Sound and two other channels between the North Sea and the Baltic sea, in...
, which stated that during the reign of Christian III of Denmark
Christian III of Denmark
Christian III reigned as king of Denmark and Norway. He was the eldest son of King Frederick I and Anna of Brandenburg.-Childhood:...
Denmark would maintain a peaceful foreign policy towards the Holy Roman Empire.

The members of the League agreed to provide 10,000 infantry
Infantry
Infantrymen are soldiers who are specifically trained for the role of fighting on foot to engage the enemy face to face and have historically borne the brunt of the casualties of combat in wars. As the oldest branch of combat arms, they are the backbone of armies...
and 2,000 cavalry
Cavalry
Cavalry or horsemen were soldiers or warriors who fought mounted on horseback. Cavalry were historically the third oldest and the most mobile of the combat arms...
for their mutual protection. They rarely provoked Charles directly, but confiscated Church land, expelled bishops and Catholic
Catholicism
Catholicism is a broad term for the body of the Catholic faith, its theologies and doctrines, its liturgical, ethical, spiritual, and behavioral characteristics, as well as a religious people as a whole....
princes, and helped spread Lutheranism
Lutheranism
Lutheranism is a major branch of Western Christianity that identifies with the theology of Martin Luther, a German reformer. Luther's efforts to reform the theology and practice of the church launched the Protestant Reformation...
throughout northern Germany
Germany
Germany , officially the Federal Republic of Germany , is a federal parliamentary republic in Europe. The country consists of 16 states while the capital and largest city is Berlin. Germany covers an area of 357,021 km2 and has a largely temperate seasonal climate...
. Martin Luther
Martin Luther
Martin Luther was a German priest, professor of theology and iconic figure of the Protestant Reformation. He strongly disputed the claim that freedom from God's punishment for sin could be purchased with money. He confronted indulgence salesman Johann Tetzel with his Ninety-Five Theses in 1517...
planned to present to the League the Schmalkald Articles, a stricter Protestant confession, during a meeting in 1537. Luther attended the critical meeting in 1537, but spent most of his time suffering from kidney stones. The rulers and princes even met in the home where Luther was staying. Though Luther was asked to prepare the articles of faith that came to be known as the Smalcald Articles, they were not formally adopted at the time of the meeting, though later they were incorporated into the Lutheran Confessions, in the Book of Concord, of 1580, in German, and in Latin translation, in the official Latin edition of the Book of Concord, the Leipzig edition of 1584.

In 1548 the victorious Charles forced the Schmalkaldic League to agree to the terms set forth in the Augsburg Interim
Augsburg Interim
The Augsburg Interim is the general term given to an imperial decree ordered on May 15, 1548, at the 1548 Diet of Augsburg, after Charles V, Holy Roman Emperor, had defeated the forces of the Schmalkaldic League in the Schmalkaldic War of 1546/47...
. However, by the 1550s, Protestantism had established itself too firmly within Central Europe to be ended by brute force. A small Protestant victory in 1552 forced Charles, weary from three decades of war, to sign the Peace of Passau
Peace of Passau
Holy Roman Emperor Charles V had won a victory against Protestantism in the Schmalkaldic War of 1547. Many Protestant princes were unhappy with the religious terms of the Augsburg Interim imposed after this victory. In January 1552, led by Maurice of Saxony, many formed an alliance with Henry II of...
, which granted some freedoms to Protestants and ended all of Charles' hopes at religious unity within his empire. Three years later, the Peace of Augsburg
Peace of Augsburg
The Peace of Augsburg, also called the Augsburg Settlement, was a treaty between Charles V and the forces of the Schmalkaldic League, an alliance of Lutheran princes, on September 25, 1555, at the imperial city of Augsburg, now in present-day Bavaria, Germany.It officially ended the religious...
granted Lutheranism official status within the Holy Roman Empire and let princes choose the official religion within the domains they controlled.